We flagged some difficulties at Bitmain a few weeks ago and they have now confirmed their listing is cancelled. Bitmain was the king of bitcoin miners up to one year ago but a number of missteps has caused them to incur substantial losses. As a reminder, they invested heavily in Bitcoin Cash and have sold a large amount of their holdings at a significant loss, in addition their most recent mining hardware is not the best in the market and is likely to be sold off below cost.

So, the team that made over $1 billion in a quarter are now loss making and are left with an inferior mining rig. All told it looks like the end of the road, I suspect it will not be though. Bitmain has done things in the past three years that have never been done before,  they also have the support of the Chinese government. Expect them to take a breather and bounce back.

Unspent Transaction Output. On a blockchain this means an address that has received coins and hasn’t spent them. UTXO’s are easy to monitor so it is easy to see who is holding coins versus who is spending them.

Bitcoin UTXO’s have reached an all time high at 68,122,146. More people holding, that tightens the market for buyers. You can see the evolution of this over time in the second chart. In 2013 and late 2017 the less than one year graph spikes as new entrants come into the market. Previously, as the UTXOs over one year get towards 60% of the total, we have seen a run up in price. 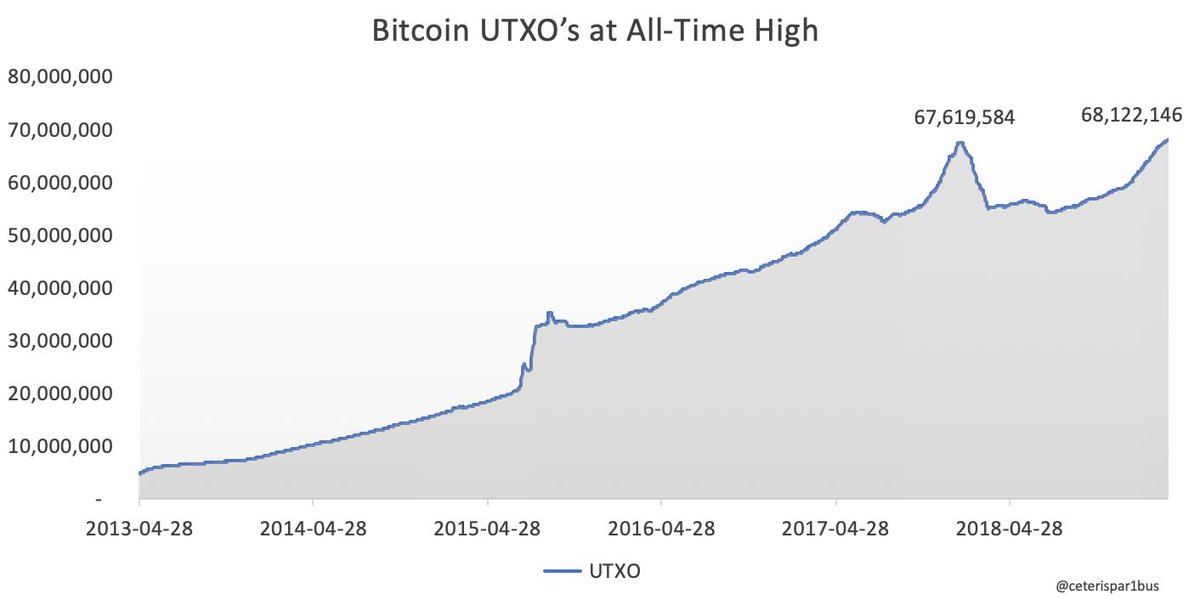 Late mail: to illustrate the point, the $900 rise in bitcoin on Tuesday was twice as big as the $450 fall in February with half the volume. Volatility lies ahead, including downward, but when buying pressure comes the market will gap unlike any other asset. The concept of digital scarcity is really hard to grasp.

Veriblock are using bitcoin to validate transactions on other blockchains. It is very expensive to operate a blockchain with the security level that bitcoin provides, so Veriblock’s solution allows other blockchains to piggy back off bitcoin to prove that certain things happened at certain times. The more valuable the blockchain in question, the more proof points one might use.

The bitcoin blockchain is a very secure digital protocol. The strength of its encryption grows with each new block, so it gets more secure with time. It makes sense then, that businesses are trying to make use of that security by anchoring their own transactions periodically in bitcoin’s blockchain.

In the chart below the spikes in December 2018 and late March 2019 show Veriblock testing, its hard to validate but they appear to be responsible for 20% of transactions in some blocks. It demonstrates that the market is willing to pay to have its markers in those blocks, so clearly there is economic value in the secure repository bitcoin provides. Many people feel that transactions like these “take up space in blocks”, the fact is if you want something in a bitcoin block you have to pay, and once you do pay, it’s up to you what you put in there.

Lightning Spin Acquired
Lightning Spin has been a favourite of bitcoin Lightning Network (LN) testers since its release in June of 2018, seeing significant traffic as a proof of concept for LN applications. In simple terms, it allows LN users to play roulette over the lightning network, with instant payouts and withdrawals based on LN invoices.

This week saw the developer of the app – Rui Gomes – sell the application to an unknown buyer, despite it only being a tech demo. Why would anyone buy what is probably the worst roulette experience in the world? Well, because it can be used anonymously, it is open source and provably fair so the host cannot cheat you of money, settlement is via smart contract. If you win, the code says you win and it settles immediately, no three day wait or cashiers desk for payout.

Watch the demo, it’s rough, but it is a glimpse of the future.

We ran a competition this week using the Blockstream satellite, 250,000 satoshis per correct answer. This technology enables users to transmit messages via satellite to bitcoin users who have a dish connected (no internet connection required).

We estimate fewer than 100 people around the world have connected a dish at the moment but the response was overwhelming. The first question (beamed via satellite) was:

We thought the question was hard. Within three minutes a physicist from Arizona had replied with the correct answer. It is a hexadecimal representation of 3 January 2009, the date the Times published it article “Chancellor considers second bailout for banks” which features in the first bitcoin block.

Moral of the story, there’s always a bigger nerd.