I love the European Central Bank. They are everything that’s bad about bureaucracy and banking all in one handy location. What’s more, they are also reasonably open about their internal insanity, this week treating us to a report called “Central Bank Digital Currencies and the financial system”.

Here are the benefits of digital currency according to the ECB. 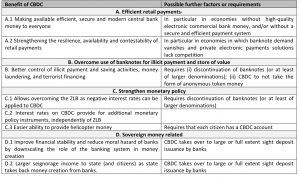 The ZLB is the zero lower bound. As a central bank, having an interest rate below zero is really hard because everyone will convert to cash and hoard to avoid paying the negative rate. With a digital currency that is not possible. The bank can simply deduct the interest at the press of a button.

This is an astonishing admission, there is so much talk and strategising at the ECB around negative rates it makes me wonder.

Helicopter money, I don’t know what to say really. Other than, yes it is true, it is easier with a digital currency to print money and shower this digitally into citizens accounts, but how could that ever be on the policy agenda? For it to be an “advantage”, it must be though.

How about “better control of illicit savings activity”. What is illicit saving? How do you save illicitly? Fine you can spend on illegal stuff but surely it’s hard to save illegally. Anyway, it will be harder with a digital currency apparently. So if you are an illegal saver based in Europe, I’d look out.

All of this prompts me to wonder who works at the ECB and writes this stuff. I did some research and found this on employment site Glassdoor which is full of chatty ECB employees. 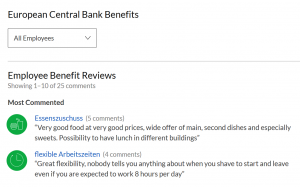 I’ve always thought the Euro would collapse, I never guessed it would be under the weight of their in-house dessert menu though. As to the ‘possibility of having lunch in different buildings’, it  sounds like something you might like about an open prison. Like I said though, the ECB are pretty open about what goes on there and it really makes for good fun.

Late last year, the US President asked the Treasury department to look at the issuance of US Ultra Long Bonds. The idea being to take advantage of low interest rates and lock them in over the longer term. Since then, the Treasury has been hard at work canvassing opinion on 20, 50 and 100 year bonds.  (You might recall the Austrian government last year launched a 100 year bond with immediate success such that the yield went negative).

That consultation has finished and last week the US announced they will begin to issue 20 year bonds later this year with the following objective:

This is an entirely sensible approach from the US, if I were them I would be selling as much of this as I could. US debt is now US$ 23 trillion and growing at over US$ 1 trillion per year. At some point in the next 10 years interest costs will become the largest budget line item, so it seems prudent to try and keep that cost as low as possible. The only issue I see is the risk of auction failure. If you are selling 2 year bonds, it’s straightforward. Investors are confident in their risk assessment that far out (rightly or wrongly). 20 years out is a different matter, not least because a sizeable portion of the addressable market will be dead at maturity.

Failed bond auctions are awful news, it destroys confidence. 20 year bonds are a clever ruse, I have no doubt they will be initially successful but they will be the first auctions to fail and look out below when that happens. The fact that we are not getting 50 and 100 year US bonds is also telling, absolutely no mention of them. Presumably because Wall Street pointed out that it is only possible to discount something as far as zero and not beyond.

I hope one day to be invited to Davos. I will give a long speech on the European Central Banks canteen facilities, including helpful suggestions for marginal improvements. I will arrive in a Lear jet in time for the climate change panel and in the afternoon I will go skiing, then I will leave, having made a difference.

It all seems very relaxed and convivial, with unlikely people sharing the stage. So relaxed in fact, that people say things they probably shouldn’t, like Donald Trump:

“Even now as the United States is by far the strongest economic power in the world, it’s not even close. … We’re forced to compete with nations that are getting negative rates, something very new,” Trump said in his address at the World Economic Forum in Davos, Switzerland. “Meaning, they get paid to borrow money, something I could get used to very quickly. Love that.”
He would love it, and I think he will get his negative rates which will be great because on a discounted basis, with negative rates, stocks will be worth infinity. The Don will then tweet “stock market at infinite highs, with more to come”. 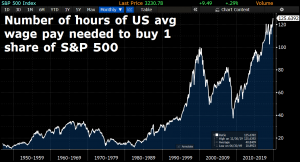 The story of inflation in the last decade will be retold many times. Apparently an entire decade of very little inflation. Here’s our central bankers in 2019 setting the scene for us:
Reserve Bank governor Philip Lowe has doubled down on the value of targeting consumer price rises and said there could be more harm than good from lowering the RBA’s target range.
Across the Pacific, Jerome Powell in December 2019.
Fed Chair Jerome Powell says he’d prefer to let inflation rise and hold above the central bank’s target before considering future interest rate hikes. “A significant move up in inflation that’s also persistent before raising rates to address inflation concerns: That’s my view,”
The chart is pretty clear though that financial asset price inflation is alive and well. It now takes 120 hours of work (3 weeks) to buy 1 share in the S&P500, in 2008 it was 40 hours, in 1980 it was less than 20 hours.
The point is, ‘rich people things’ are going up in nominal price a lot. Houses, share prices, education and heath costs. ‘Poor people things’, flat screen TVs and cotton t-shirts are not, they are declining in nominal price.
It’s quite a simple mechanism for a wealthy person.
cheap money > access goes to rich people first/only > buy rich people things > rich people things up in value > feel richer > repeat process
For a poor person the process is rather different.
want rich people things > can’t > buy t-shirt
It just is not sustainable. What’s more, even if you are richer than Croesus, inflation is still chewing away at quite a rate. So, rich or poor, buy something scarce. 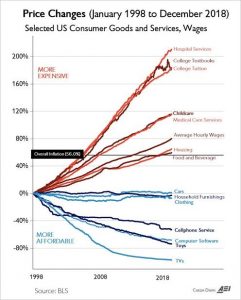 Return of the Eurocrat

Euro-cockroach Benoît Cœuré has returned. Late last year we discussed his retirement from the ECB where he enjoyed a US$300,000 salary, fixed eight year term and (very) large pension. I imagined Benoit would retire to his Parisian apartment but I underestimated him. He has joined the Bank of International Settlements……..wait for it…..for a fixed five year term, large salary and (very) large pension.

I mock Benoît, but he is no fool (see fixed terms and large pension, with zero risk). He led the G7 research into stablecoins, he led the charge against Facebook’s Libra coin, knowing what a threat it was to the Euro and he understands well the threat bitcoin poses to the Euro, having described bitcoin as  “the evil spawn of the financial crisis” .

The Bank of England announced yesterday that they are working with the Banks of Canada, Japan, ECB, Sweden, Swiss National Bank and the BIS with view to launching a central bank digital currency. The Chairman of the Group, well that’s Benoît (full press release below).

The results of this are entirely predictable:

The whole idea of Central Bank digital currencies is false really. Their currencies are already digital, the idea will be to use some hybrid blockchain technology and announce a major triumph in payments but it won’t work because that’s not how it works. It will simply create a surveillance tool. I imagine it will take 4 years and 11 months to figure that out though by which time Benoit will have joined the IMF for a fixed term of five years (in fact he’s actually favourite for the top job at the BIS in 2022).

One more observation, the working group does not include the Federal Reserve. The Europeans, the Chinese, and the Russians are all done with dollar dominance, the absence of the US is telling. 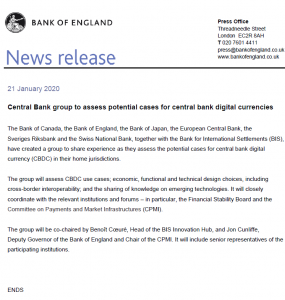