As you probably know by now, the bitcoin genesis block contains the message “Chancellor on the brink of second bail out for banks” dated 3 January 2009. As it happened, the British Chancellor did not bail out the banks a second time, but across Europe the chances of more bail outs are rising all the time. The reason is rather simple. 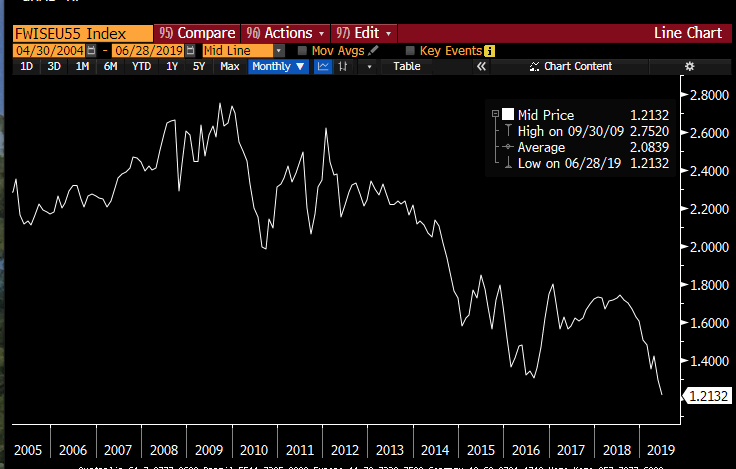 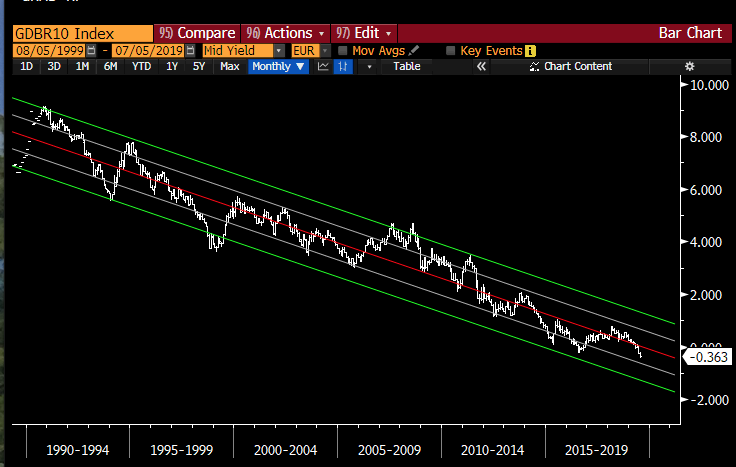 Firstly, the European Central Bank has one mandate only. Keep prices stable. The stated target is for inflation of 2%. Unfortunately for the ECB, as you can see in the first graph above, inflationary expectations in Europe just keep falling. Largely, this is because so many people are actually unemployed or underemployed in the peripheral economies of Europe. So, the bond market keeps rising because bonds are great in a deflationary environment for the lender. Effectively, what you are owed keeps going up in value.

The ECB has very few options then to fulfill their mandate. They can keep cutting rates (but they will go negative) and they can print money. Unfortunately, unless you are a bond holder, the printed money then goes into already expensive bonds which makes things worse.

Secondly, the condition of the big European banks. Deutsche Bank has announced 20,000 redundancies this week, there is an exodus of senior staff and by any measure they are technically bankrupt. Other weak banks are BBVA Spain, Societe Generale France, UBS, Credit Suisse. Looking at their equity prices they are close to all time lows and below the 2008 crisis level in some cases. Very low interest rates are a real problem for the banks, their margins are crippled, it is impossible to plan, hard to lend, difficult to asses risk because the price of money has been so manipulated for 10 years now.

The ECB will not allow Deutsche Bank to go bust but this is a slow motion banking crisis. The Euro will be worth a lot less by the end of it, if it survives at all.

How does it affect crypto

The main reason I continually refer to issues in banking is that they were the driving force behind bitcoin. The inventor(s) knew the game was up with the fiat currency experiment.

By way of example. I want to know how many bitcoins are in circulation, I will make a request on my bitcoin node which has been validated by vast amounts of proof of work mining. I know this amount cannot be inflated, I know I can always check the number (17.8m currently as you will see in the video).

It really is as simple as that. In contrast, bailing out Deutsche will require vast money printing. If you hold EUR, your money will be less valuable overnight and there will be absolutely nothing you can do about it. What is more, most people won’t even notice, they will even applaud.

Bitcoins mining difficulty has been an at all time high for a while now, but more importantly this week we saw 2 year highs in the percentage rate at which difficulty is increasing.

Mining requires vast amount of computing resource. In orders of magnitude, as many grains as sand as their are on earth is the number of calculations being carried out by miners every second.

Grains of sand on earth ~ 7.5×10^18
Bitcoin hash rate per second ~ 65 x 10^18So, for difficulty to increase at this rate, at these levels of hash, means someone is investing a great deal of money in mining equipment, new chip design and likely a combination of both. 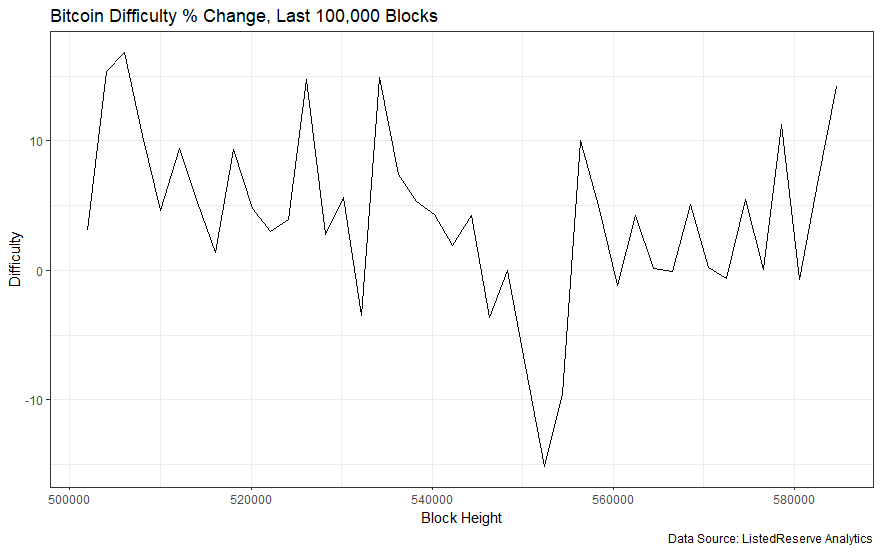 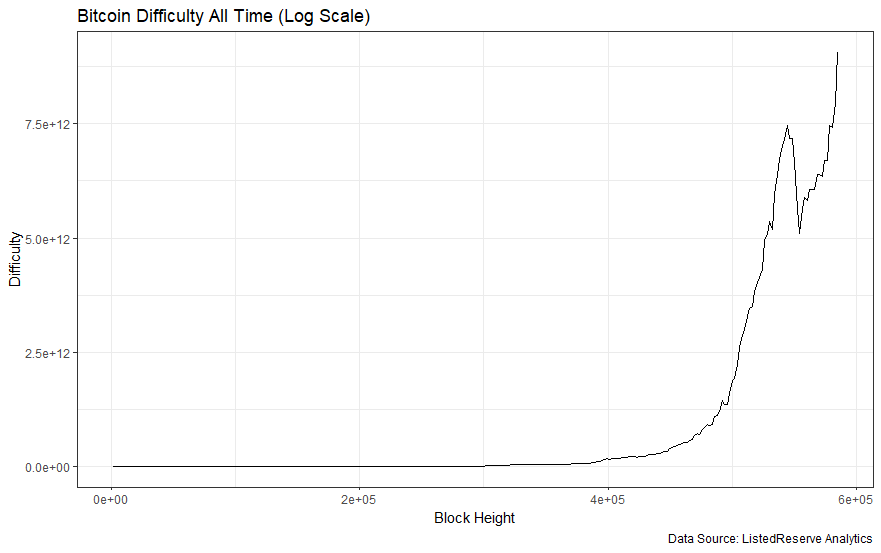 Valuations of alternative currencies continue to fall relative to bitcoin, the chart below showing the last 7 days. As we have discussed before, the impending arrival of Libra and the continued inability of some smaller coins to deliver on promises is finally revealing itself in price. Note, this is much less pronounced in USD.

Even more relevant is that liquidations of alt coins generally flow into bitcoin, not into fiat currency, so expect a lot of this liquidity to be hoovered up by BTC. 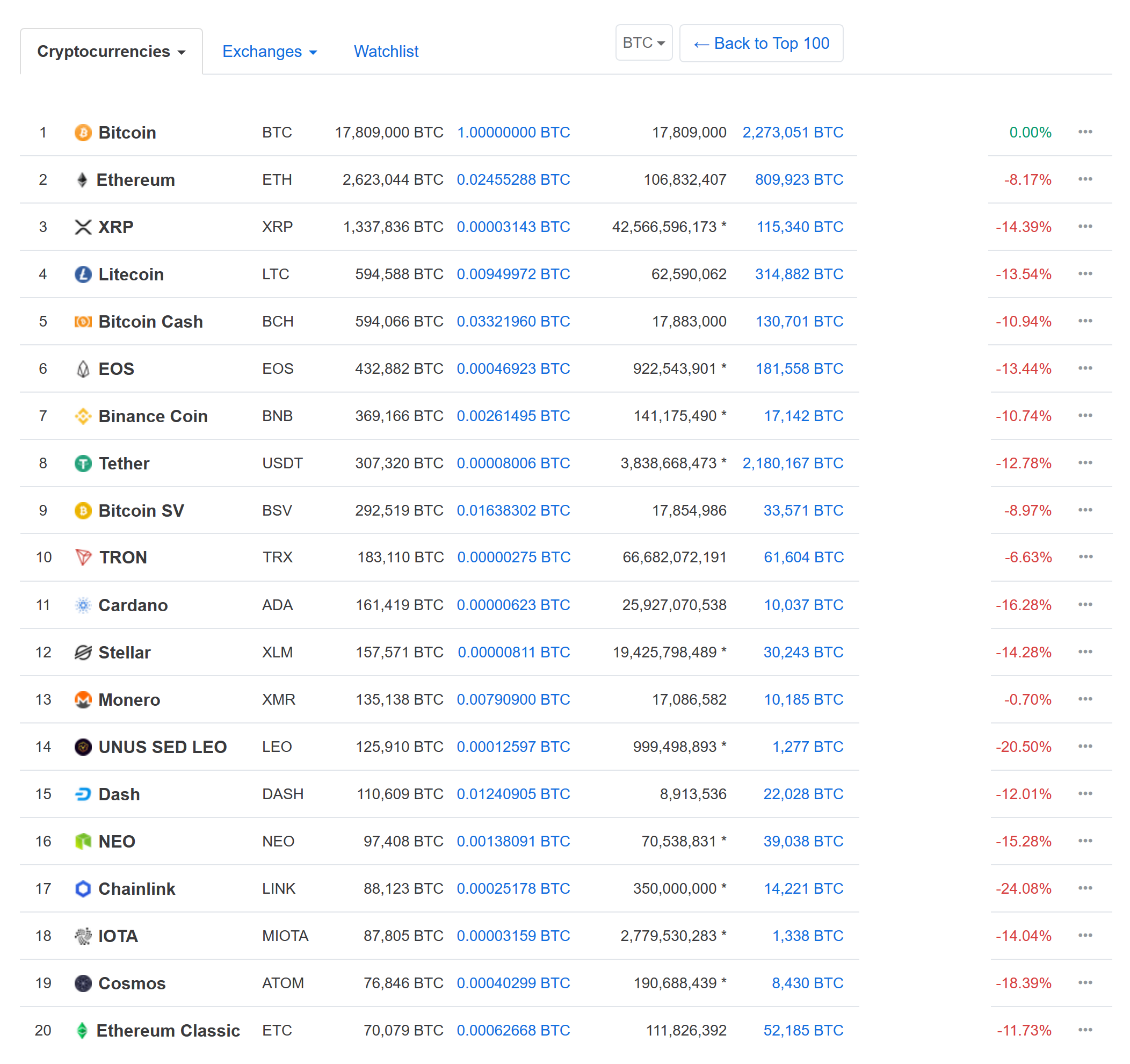 For those monitoring the Bitcoin network last night, we got a brilliant insight into how a decentralised trustless protocol regulates fraudulent activity by bad actors.

At about 2:35 US Time on July 10th, a miner attempted to pay themselves a block subsidy of roughly 13.26 BTC, greater than the protocol enforced 12.5 BTC subsidy, triggering an invalid block header by those listening with their nodes. Our node in the LR office picked up the error and crucially, rejected the block (see below). 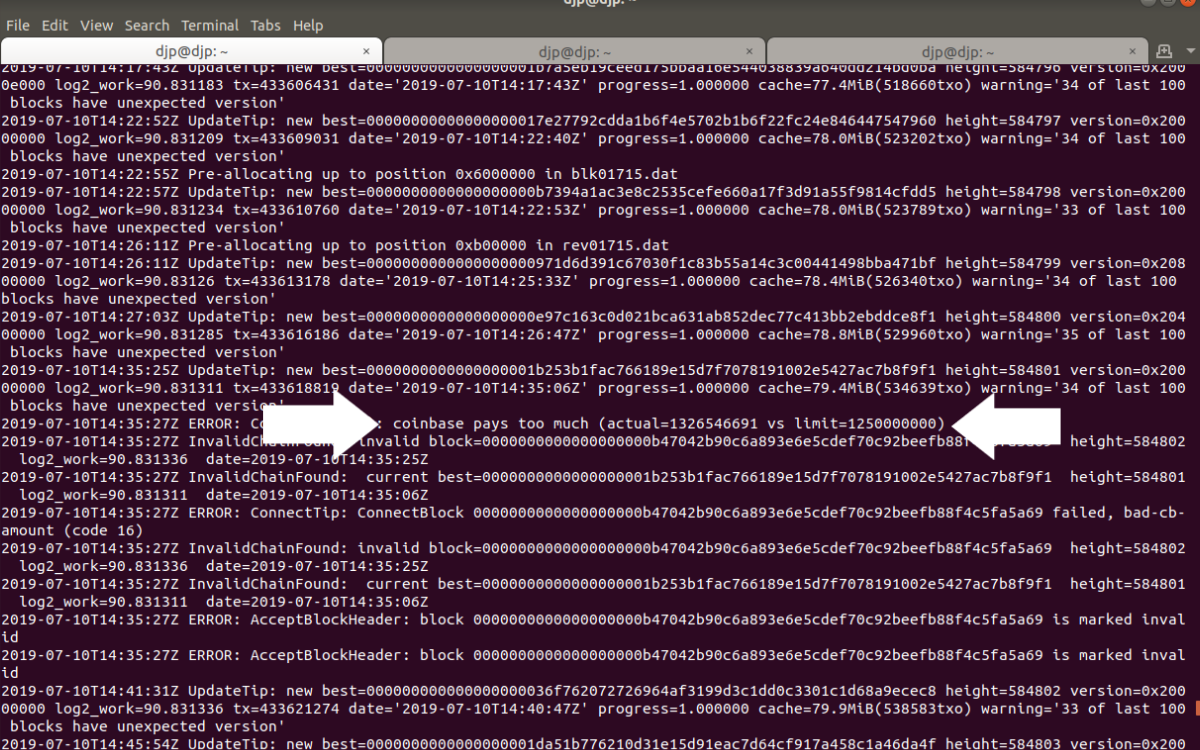 QE doesn’t work in bitcoin. Turns out this was a coding error by the miner, they correctly included the block fees in their coinbase claim but they didn’t include the correct transactions representing those fees.

A US$150,000 error. Thanks for the demo of how this brilliant tech actually works.