Australia is rich. Really, really rich. My perception is that most Australian’s don’t appreciate this fact but as a recent immigrant, I can tell you, it’s rich. I’ll labour the point because it’s important; cold water fish, tropical fish, gold, uranium, rare earth metals, every edible animal, all vegetables, most fruit, natural gas, virtually unlimited land and coastline, an undiscovered centre with who knows what lies beneath.

Unemployment is low and the economy has been growing uninterrupted for over a generation.

….and…..they are considering quantitative easing. It was heavily flagged at this week’s Reserve Bank meeting where interest rates were again cut, this time to 0.75%. QE is now expected by the market next year. Why?

Why would a country like this print money and buy assets on the open market? In what way will this benefit the populace? The idea that driving the inflation rate to 3% through money printing will somehow make everyone more economically active and confident doesn’t ring true (Japan: failed, Europe: failed, America: about to fail when it restarts QE).

In fact, the whole low interest rate policy has failed, because the economy no longer reacts to what has become obvious manipulation.

It won’t react to QE either because everyone knows it’s a charade. The only beneficiaries will be those who are close to the printing press, those banks and insurance companies holding bonds which the RBA buys through QE.

This is why we say buy bitcoin. It cannot be debased, its supply cannot be manipulated. It will be increasingly obvious over time why this is so important. I will hammer this point over the next four years and then, I will move to Switzerland. 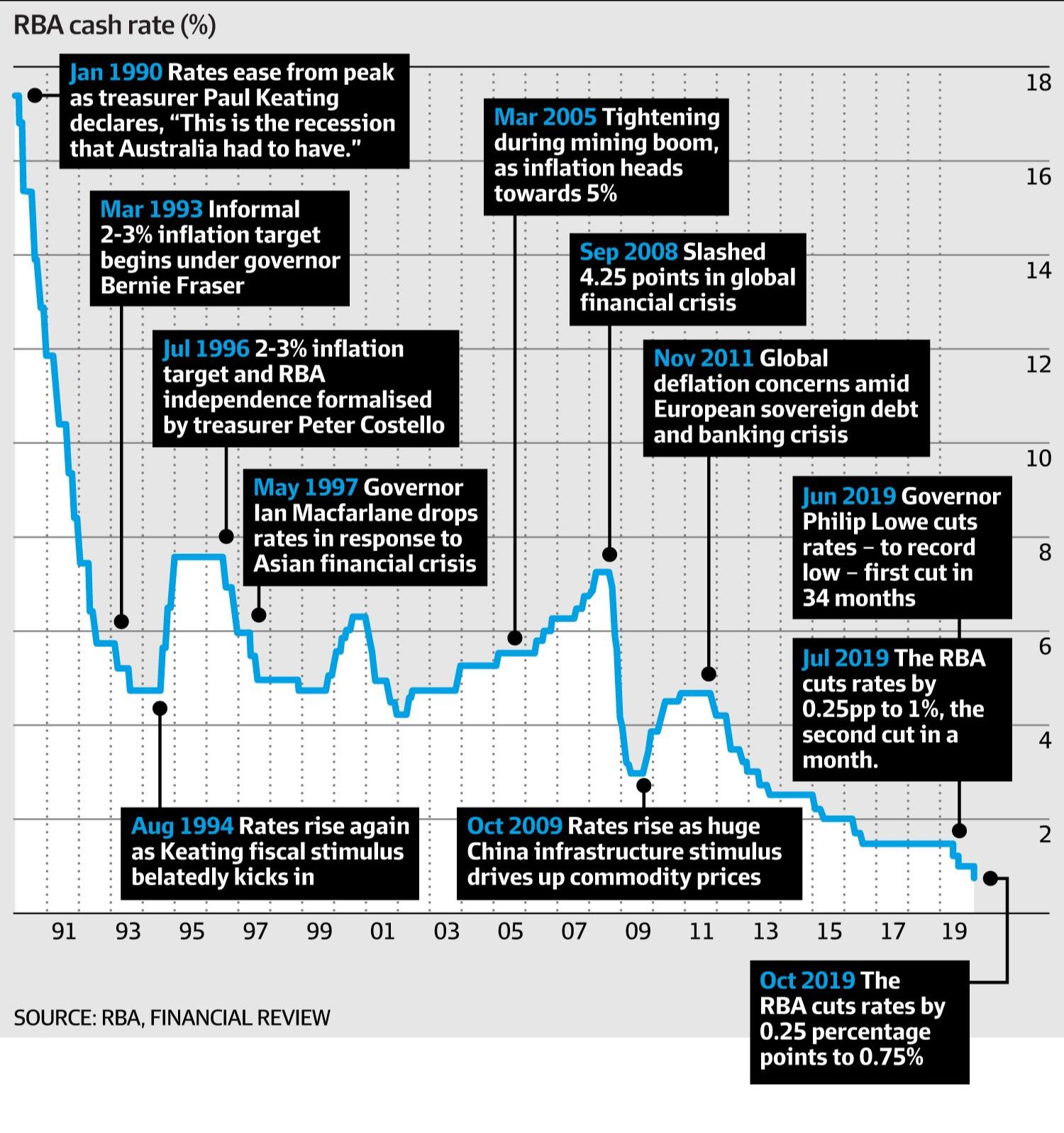 Our Managed Fund and Bitcoin Fund are still considered rather exotic investments, mostly because we are doing something different by investing in a new asset class that might work, but might not. I have to say though, why wouldn’t you give it a go? Take the table below from the Financial Review this week, various forecasters giving their views on indicators for the next 12-18 months. Hardly any different opinions, not one ‘expert’ is prepared to consider that we might experience negative growth next year, or that the unemployment might start with a 6% figure. Not one outlier. 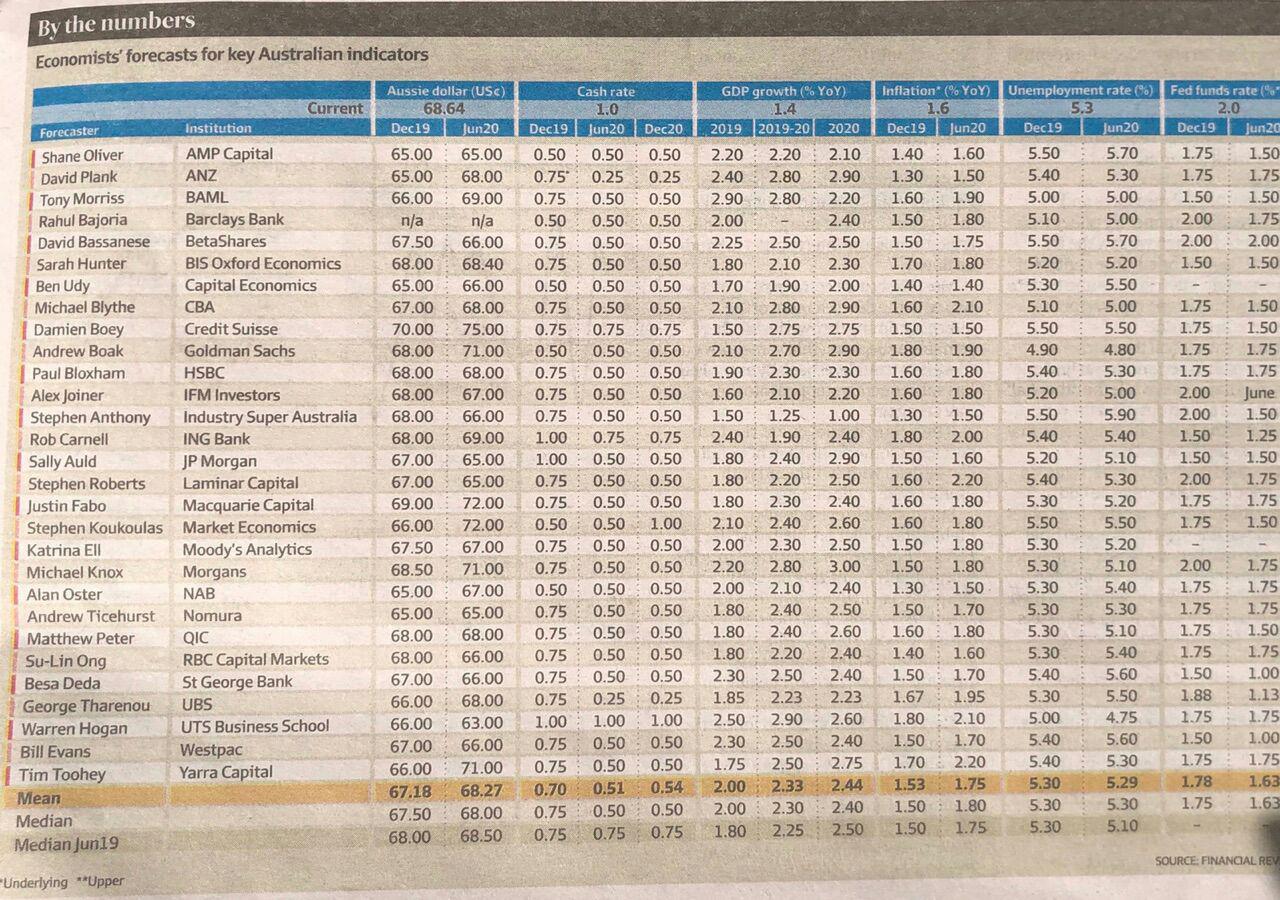 So, I look forward to:

a. being wrong, and
b. at least having a chance of generating some alpha over everyone else.

Hardly radical projections. But in the 99th percentile versus everyone else.

Bloomberg reports that Venezuela is working out how to add cryptocurrency to its foreign exchange reserves after being offered crypto in return for oil sales. With US sanctions against the Maduro government isolating them from global financial systems, the central bank has been open to experimentation, including a failed attempt at creating the world’s first sovereign cryptocurrency.

Following up was the President of Belarus, who wants to use the countries excess nuclear energy to mine bitcoin. It sounds crazy but makes complete sense because that’s the power of bitcoin, you can take excess energy and convert it directly into monetary value. Most countries haven’t worked that out but they likely will in time.

Bitcoin’s total market cap is still tiny when you compare it to the foreign exchange reserves held by the major trading nations, I can’t see any major nations adding bitcoin yet, but it will come. 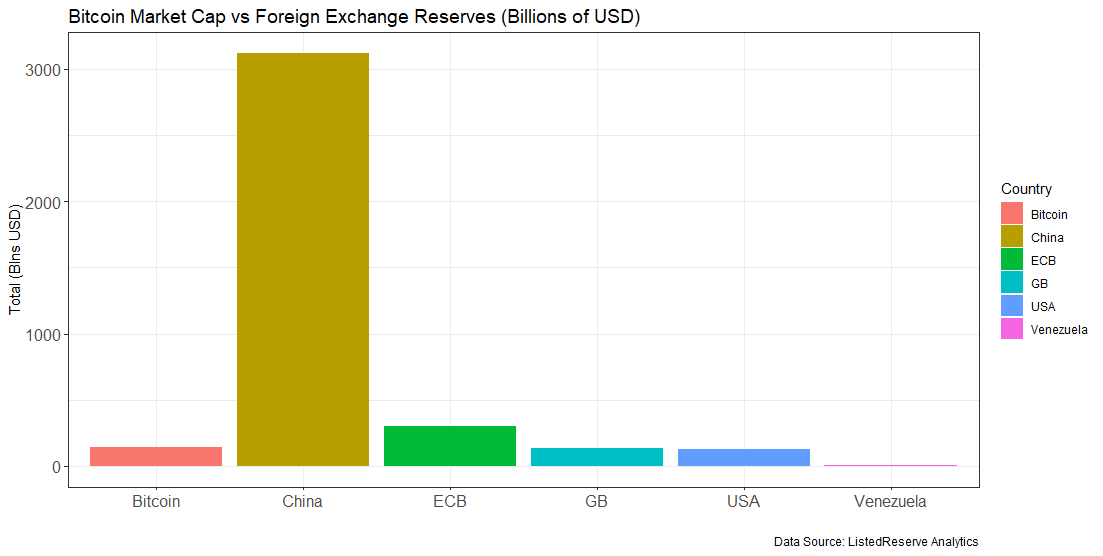 Following the recent price pull back in bitcoin, the temptation is to wait for more falls and try and time the best possible entry point. If you get it right then it’s great, most likely though, you won’t. The real risk is not that you don’t pick the bottom but that you miss the strong upward runs that bitcoin can experience. If you are considering adding, take a look at this chart. If you miss the best 10 days of gains each year, you lose. Even with the best performing asset class of the last decade, you still lose. 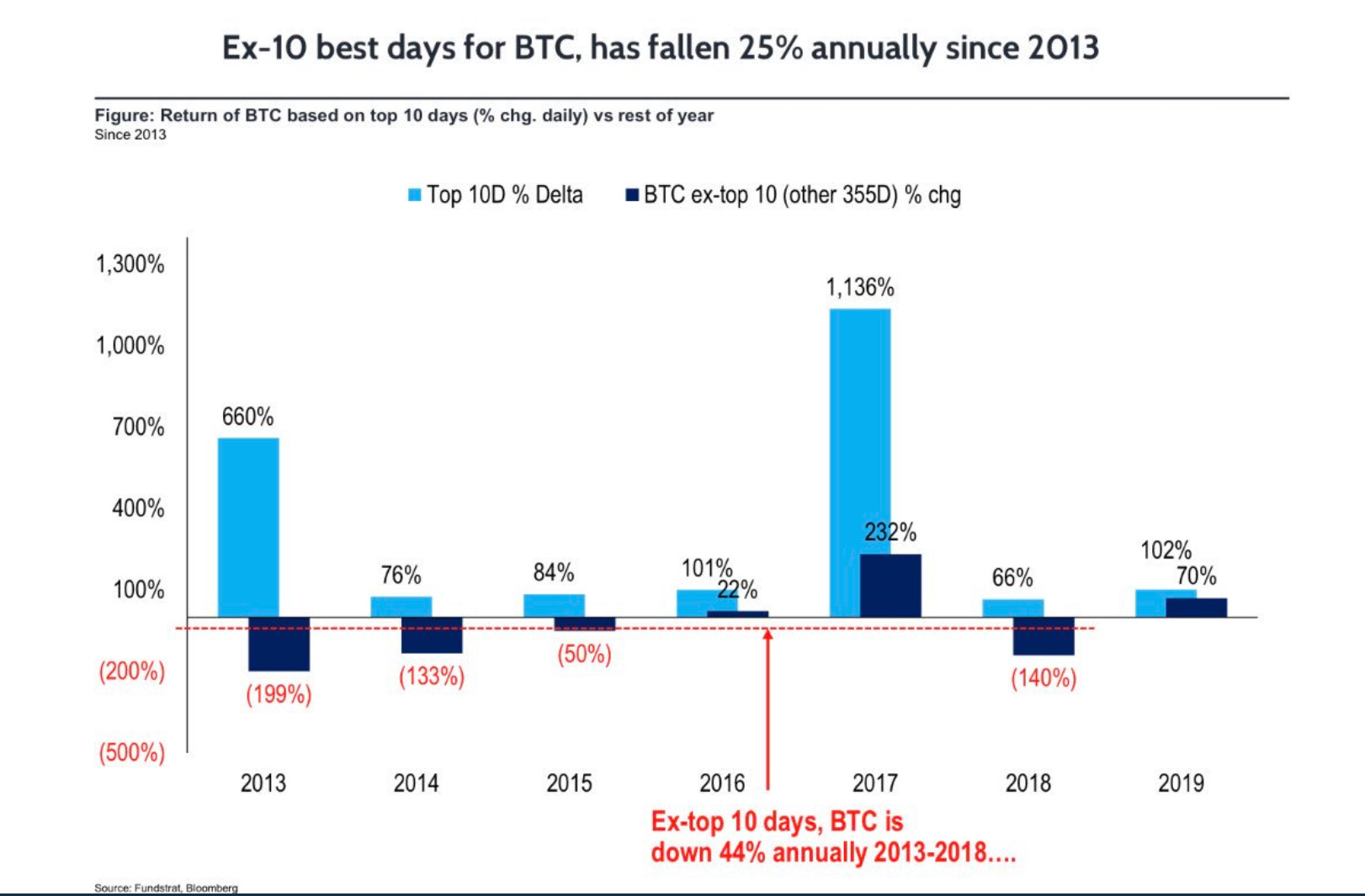 The SEC this week finally made a move on EOS, fining the creators block.one $24 million in civil penalties for their unregistered initial coin offering. This might seem like a sizeable fine for crypto, but given EOS raised over USD$4 billion, it’s just 0.6% of the capital raised.

The settlement included no admission of guilt from EOS and an agreement that criminal charges would not be laid.

If they had raised that money through traditional regulated methods it would have cost them much more than 0.6% of the raise, they would have been handing even more money to Goldman Sachs than they have to the SEC. While the result is as good as EOS could have hoped for it isn’t clear whether other US agencies are still in pursuit, including FinCen, the Financial Crimes Enforcement Network. They may be altogether less lenient.