A strong run up in price this week with bitcoin at US$12,500 at the time of writing. The real feature of this run is that it is almost entirely bitcoin driven. Alt coin market caps aren’t really moving and bitcoin now represents 63% of the total crypto-market cap, up from around 50% earlier in the year.

Strong price moves like this have not been uncommon due to bitcoin’s unique supply curve. Simply put, supply is short and increases in demand can only be met with a rising price.

When the price pulls back sharply, which it generally does, prepare for “bitcoin price crashes” headlines.

It was a big week for monetary policy around the world. Firstly in Europe, Mario Drahgi announced he was willing to cut interest rates further and buy more government bonds to kick start the European economy and get inflation above 2%.  Unfortunately, the ECB is almost at the limit of what they can currently buy in terms of bonds, being legally restricted to 33% of of any one countries outstanding debt. The ECB balance sheet now stands at over 40% of European GDP.

The result of this will likely be the ceiling on debt purchases will be raised from 33%, secondly, additional money will be printed to make this all happen. According to Bloomberg, somewhere in the order of EUR1.4 trillion. These are vast sums of money and we are witnessing the straight forward monentisation of European government debts.

Meanwhile, in America, The Federal Reserve wasn’t quite so aggressive but signalled their willingness to make further cuts to US interest rates to support the economy. This, in an economy with record high stock market, record high bond prices and unemployment at 3.6%.

So the value of money in Europe and the US steadily erodes and it will continue to. Hard money like bitcoin and gold reacted predictably as you can see in the chart below. 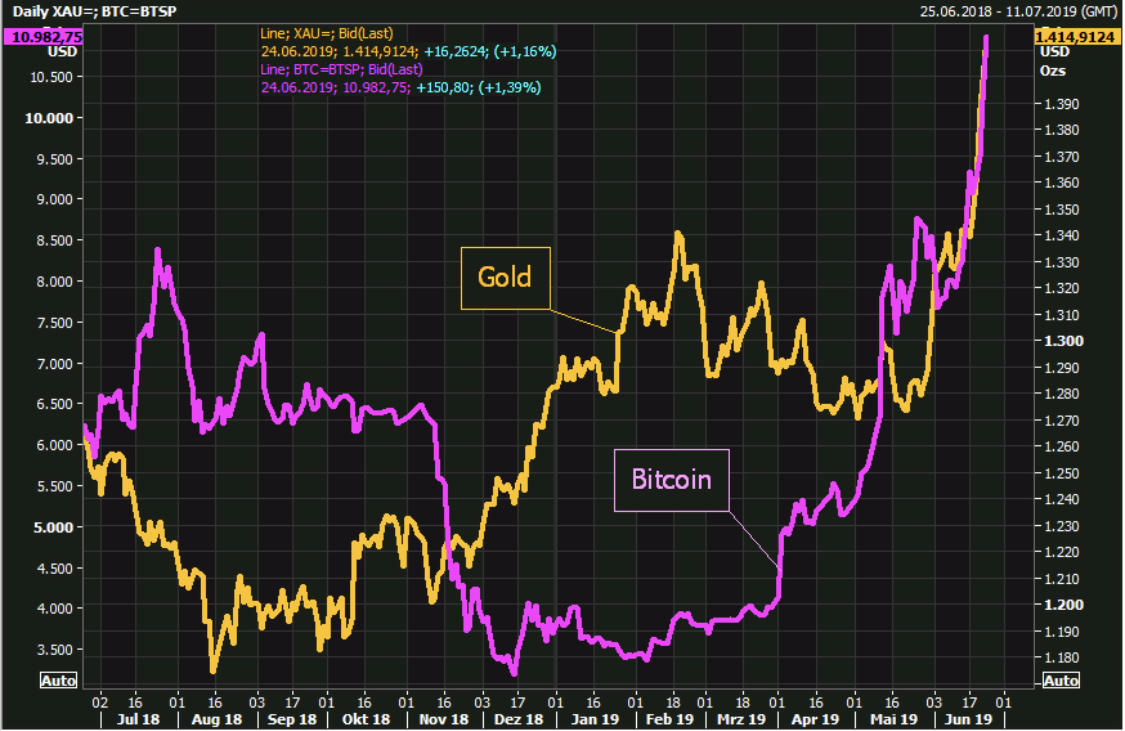 We laid out our view on Libra here last week. Since then, governments around the world have had their chance to comment. What is obvious is that governments are aware that Libra is a major threat. Being a basket of global currencies and bonds is a far better currency than relying on any one national government to do the right thing. Libra will be the least worst fiat currency and people will select it over their home currency for that reason. What is also obvious from the quality and depth of the content that Facebook released is that they can move far more quickly than governments can legislate.

You can easily imagine going on holiday now and never having to convert funds. Simply pay in Libra wherever your see a visa sign (remember Facebook has signed up Visa and Paypal). What about getting paid in Libra – why not? better money than national fiat.

“It is out of the question that Libra become a sovereign currency, It can’t and must not happen”

In the US, which to be fair has more to lose, Republican Senator Maxine Waters revealed her rather good understanding of the inherent weakness of sovereign fiat currencies:

“We can’t allow them to go to Switzerland and begin to compete with the dollar.”

This will be a major battle not just for Facebook, but for the major tech companies they have signed up. The Libra foundation includes Paypal, VISA, Andreesen Horowitz, Vodafone among many others – the full list here is impressive.

So it’s Silicon Valley v Governments. Only one winner then. After all, he who pays the piper, calls the tune.

Good, bad and ugly this week for Ethereum.

First the good. The protocol’s much anticipated 2.0 update has finally been given a release date, with ‘Phase Zero’ now being scheduled for January 3rd 2020. This is the first step on the road of Ethereum moving to proof of stake, ultimately a move designed to accommodate scale.

Then the bad, Facebook’s Libra. Libra has taken clear aim at smart contract protocols and Ethereum has long maintained its lead in this area because of the depth of its development community. The new player in the game is funded by a number of billion dollar multinationals so expect developer defections.
Worst of all, the ugly.  BitMEX released some research on the Ethereum protocol, finding major discrepancies in the numbers between its two major client implementations – Geth and Parity. Nodes running the Parity client have consistently reported a block height roughly 100,000 blocks higher than Geth clients. This is the equivalent of trying to row a boat with one canoe 20 metres longer than the other. Basically the left had doesn’t know what the right hand is doing.
A short tutorial
On the power of bitcoin. This is one of the reasons we believe it is valuable. In the image below we run two queries (on an 11 year old computer running a full bitcoin node) they return:

1. The exact block height
2. The current level of mining difficulty
3. The amount of computing power currently being input to the network around the globe
4. The exact and complete money supply for bitcoin at that point in time

Now, please try to do the same for the USD, or gold for that matter.