Returning briefly to bitcoin’s price spike last week. A lot of questions about this, so here is a summary of what happened. Three buy orders for 7,000 BTC each were placed very late US time on 1st April. In total, those orders were just 0.1% of ultimate total supply. That alone was enough to exhaust OTC desk supplies and the price spiked by $1,000 in minutes.  See graph below from Cumberland (BTC OTC desk) showing the trades.
A continual point we make here is that this is a restricted supply asset. From May 2020, it will be the most rare asset in existence (if you consider a digital asset an asset at all). Price spikes like this will not be unusual and they will go in both directions; recall the price fell from $20k to $16k in 4 days in December 2017. 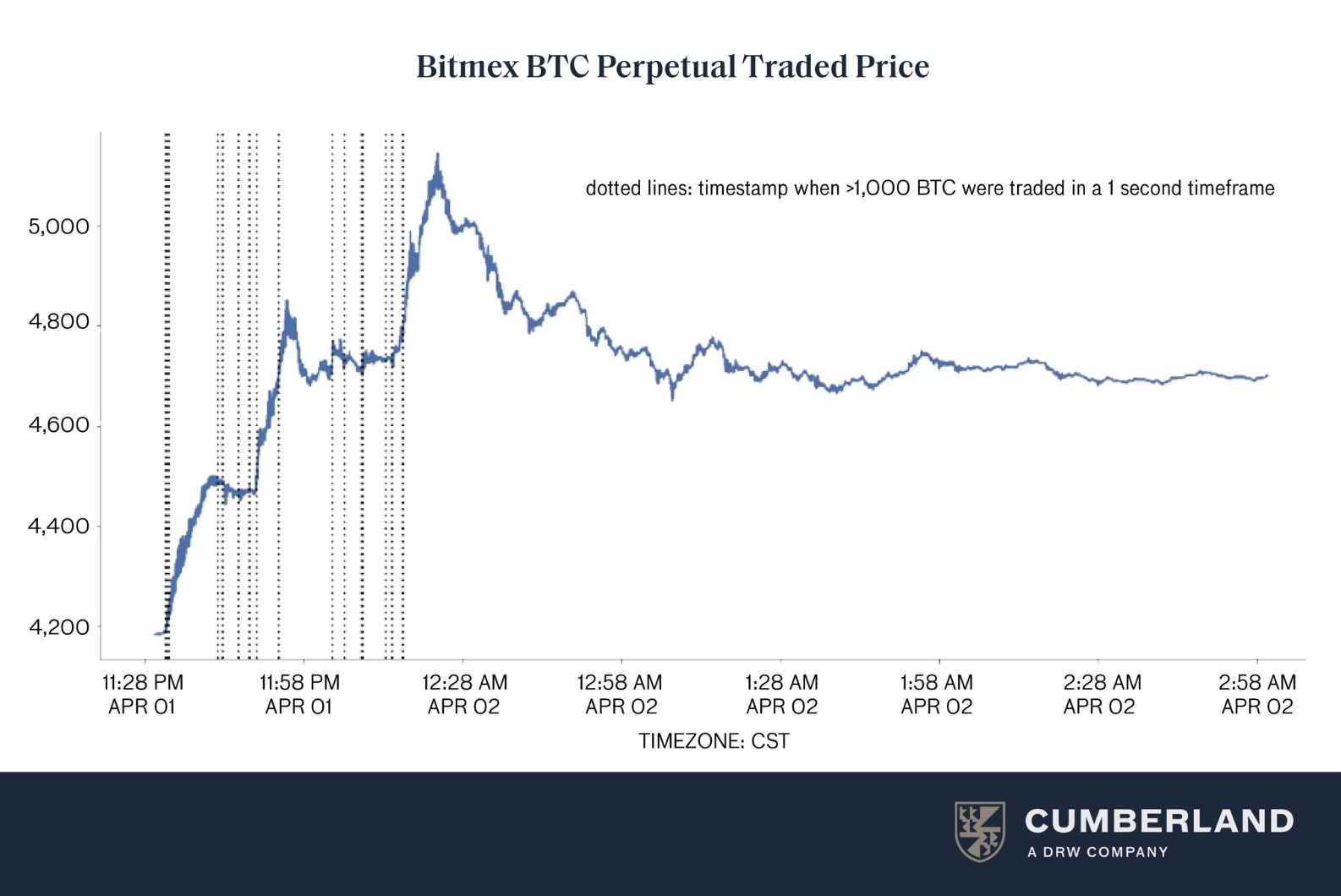 SEC on ICOs
The SEC has issued new guidance on ICOs this week. To summarise
The SEC reiterated the Howey test for a security. Your asset is a security if:

There are also some strange comments in there, for example airdrops could be considered securities. Even though by definition people do not invest money in airdrops. The SEC is hedging its bets here in case one of these airdrop tokens really takes off and starts making money.

In any event, we can take from this that the SEC isn’t leaving this alone and must be investing significant resources in this space. Long term it has to be a positive sign, even so, if you are considering launching an ICO – don’t do it in America.

Andreessen Horowitz, the 10-year-old venture capital firm is morphing into a registered investment advisor, renouncing its status as a VC firm. This will mean the full horror of compliance audits and expensive training for about 150 staff. Why would anyone do such a thing?

Well, one reason might be they are currently restricted as a VC  to hold no more than 20% of their money in assets that are liquid securities, such as cryptocurrencies. The SEC, quite correctly, considers them high risk investments.

a16z is one of the biggest investors in crypto, for example they were an early investor in Coinbase. Their announcement did not say this, so this is simple speculation, but it wouldn’t surprise at all if they were making this change so they can double down in this sector.

Central Banks in Blockchain
The World Economic Forum has released a paper on the uses of blockchain in central banking, available here. Unsurprisingly, there was little mention of the major digital currencies like Bitcoin or Ether, but it is clear just how bullish these organisations are on the technology. More than 40 individual central banks are said to be directly looking at the implementation of blockchain in their processes. The diagram below depicts the desired ecosystem of central banks, their position on Crypto is obvious enough: 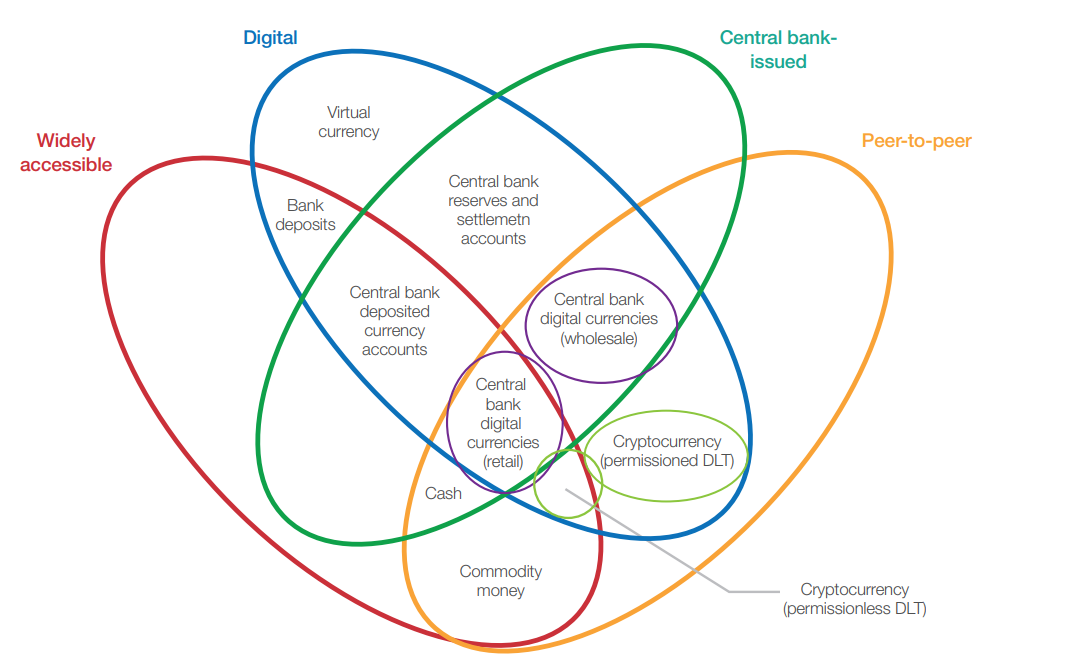 These organisations are typically interested in transacting in highly controlled, centralised enterprise blockchains (also known as databases),  adoption of individual central bank digital currencies (CBDCs) won’t necessarily drive growth in cryptocurrency. More importantly though, this is a key indicator of the awareness that Central Banks have of these nascent currencies. Readers of Saifedean Ammous’s “The Bitcoin Standard” will know that only one of these CBs has to recognise the virtues of Bitcoin as a reserve asset for the rest to follow.

“Should one of these countries announce the replacement of even a small amount of reserve assets with bitcoin, the impact on Bitcoin’s price would likely be massive and that small portion would grow into a not-so-small portion. Other countries could follow suit in an attempt to replicate the first country’s success; the likely effect would be a significant drop in the value of national currencies used as international reserve assets, as each central bank scrambles to sell some of its international reserve currencies for the quickly appreciating bitcoin to back their own currencies and preserve their value.”

The fact of the matter is, why would anyone want the Fed’s crypto-dollar anymore than they would a paper dollar?

Futures Records Broken
Bitcoin futures trading hit all time high volume on the CME this week. 113k Bitcoin – equivalent to USD $600m. Contracts on CME have a minimum size of five Bitcoin, suggesting that the volume is coming almost entirely from institutional investors, given the cash liquidity required to trade these contracts. We have flagged institutional money for some time, we’ll stop flagging because it looks very much like it’s here. 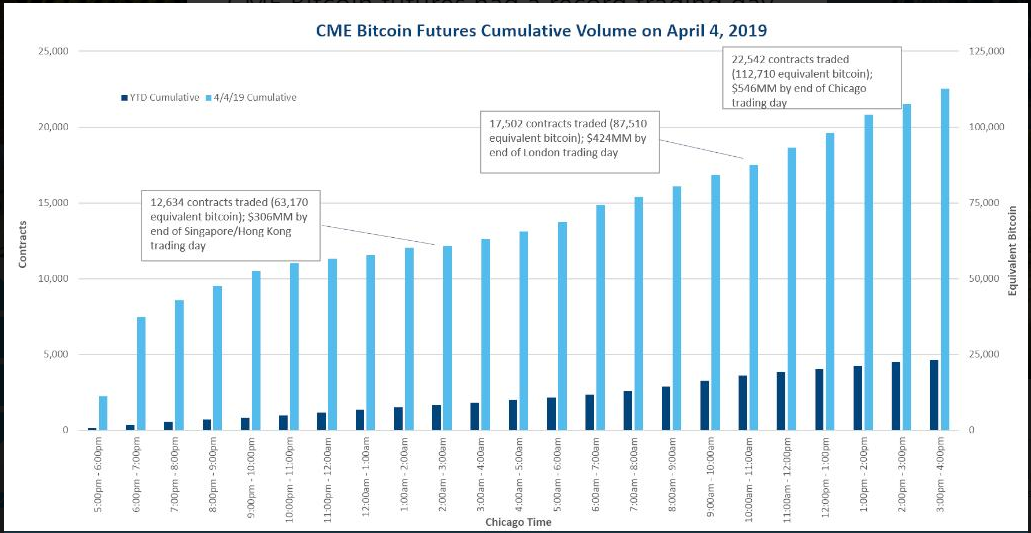