We talked last year about Fidelity launching products in the crypto market. Fidelity gave a progress updated this week announcing that they are in the final stages of testing their custody and trading product, their full release can be found here. Restricted to institutions and family offices at first I expect they will tread very carefully but once they get going and expand the reach of the product it could get interesting quickly.

Fidelity is launching bitcoin first, remember that the entire crypto market capitalisation makes up <0.1% of global investable assets and bitcoin is roughly half that.

Interesting developments in smart contracts this week. Traditionally the best asset for smart contracts has been ethereum because it is designed to be easy to code specifically for that purpose. Bitcoin on the other hand has an awkward programming language that doesn’t support smart contracts at all, they are feasible but difficult.

Welcome wrapped BTC: effectively this is a bitcoin wrapped inside an Ethereum token with a 1-1 peg. It’s a clever idea:

The question mark is trust around the peg, that is being managed by a custodian BitGo, who are one of the most credible businesses in the industry.

The rate of innovative product release seems to be increasing this year and most of these tools are designed to help developers build more useful products, they aren’t end user products in themselves. That tells you the stage of development we are at, which is very early indeed.

VanEck has resubmitted its bitcoin ETF application to the SEC this week having withdrawn it during the US government shutdown. Increasingly the view appears to be that an ETF is unlikely to be approved this year due to a variety of issues that SEC is wrestling with.

Cryptocurrency mining hash rates reflect the amount of computing power miners are committing to the network to resolve blocks. Miners incur considerable expense in both hardware and electricity consumption. When the price of a currency drops, mining profitability also falls and often that is accompanied by a falling hash rate which brings mining profitability back to equilibrium.

During the price falls of Q4 last year we saw the hash rates fall significantly. That decline is clear from the graph below. 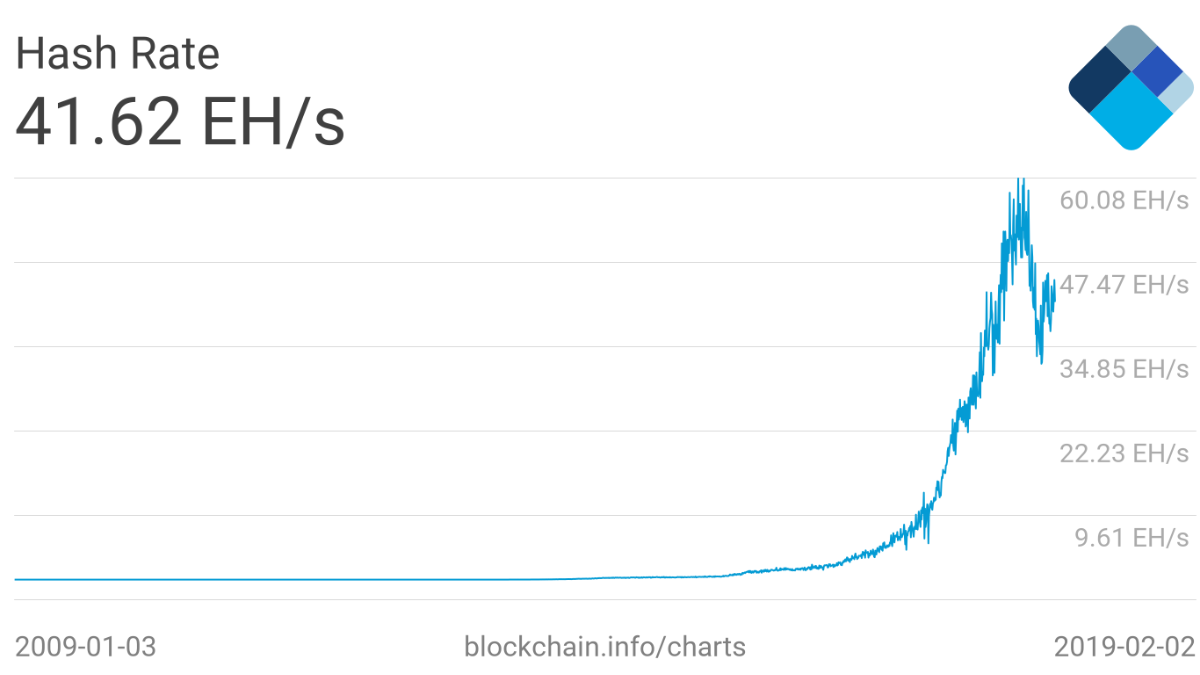 In the recent cycle the bitcoin hash rate bottomed in mid-December and has risen 20% since. Hash rate is something worth following since it strongly correlates to the overall strength of the ecosystem because it reflects price, miner investment and to some extent what the collective community feels about the future. Think of it as the wisdom of the crowd in one chart, you can follow it here.

Last week file sharing site BitTorrent completed its token sale.  They sold 60 billion BTT tokens on Binance and raised $7.2million, all done in the space of 15 minutes. The token value has doubled since launch which is a promising start and it can be used to enhance the experience on the file sharing site (paying for content, faster downloads etc.).

The token has the characteristics of a loyalty scheme. This seems to be a trend in recent token releases in that they are designed to support a current product or business rather than standalone themselves.