The big news this week surrounded Ethereum Classic (the original Ethereum blockhain). ETC was subject to what’s known as a 51% attack where someone with sufficient processing power can effectively take over the chain and re-write recent transactions claiming ownership of coins for themselves. In the end, the attacker returned the money they had successfully stolen (roughly US$200k).

It begs the questions could this happen with the larger assets like bitcoin? The answer is theoretically yes but the amount of processing power and electricity required to do it is so large (for example you would need computing power multiple times more powerful than the worlds most powerful supercomputers) that it is practically impossible. What is more, having spent what would be hundreds of millions achieving the goal you would then have destroyed the value of the thing you stole, this game theory concept is at the core of a number of aspects of the technology.

Bitcoin itself was certainly vulnerable to this kind of thing earlier in its life but the Lindy Effect is playing out, the older bitcoin gets the less and less likely its death becomes.

Some major issues for Ethereum this week as their long planned Constantinople update was delayed amongst concerns about the security of the network’s Smart Contracts. Developers from the Ethereum core team located a bug which would allow “re-entrancy” attacks and double spending within some existing smart contracts. With the fork expected to occur on January 17, the team decided to delay the upgrade indefinitely until the vulnerability was fixed.

From a market perspective, the response was an immediate 7% drop in the USD price of Ether. This particular update was supposed to be relatively minor and there is now real frustration at the pace at which Ethereum is moving forward. We have written at length about the Ethereum 2.0 road map on our blog here.

We discussed the $180m Bakkt raise last week. It didn’t take them long to start spending and this week they announced they have acquired some of the assets of the Rosenthal Collins Group, a nearly 100 year old futures commission merchant.

Bakkt wanted it for the back office technology around treasury and settlement.

“This acquisition underlines the fact we’re not standing still as we await regulatory approval by the CFTC for the launch of regulated trading in our crypto markets. Our mission requires significant investment in technology to establish an innovative platform, as well as financial market expertise to deliver the most trusted fintech ecosystem for digital assets”.

The acquisition met a luke warm reception actually, with some observers noting this could potentially delay the Bakkt launch further. Time will tell, but the sooner they get going the better.

I shared this interesting note on pricing last week. Rather than focusing on price peaks, it highlights yearly lows for Bitcoin over the course of its life. 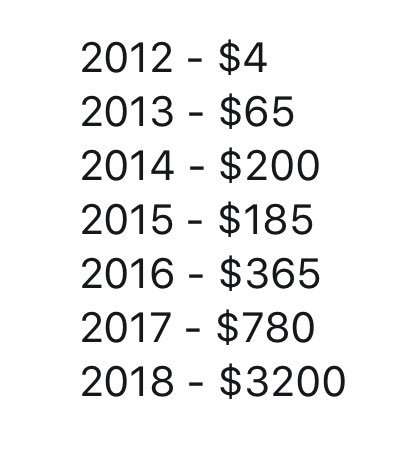 An interesting trend, the theory put forward to support this is that there are growing number of people that simply buy and hold bitcoin. After each peak, there is a trough (as we discovered again in 2018) but the number of core investors simply holding rises with each wave. The other metric is supply, which falls periodically, with the next supply cut expected around May 2020.

Bitcoin has lost around 80% of its value four times since its launch and recovered to higher highs each time, it is clearly still volatile but it is equally resilient.

HSBC announced this week they had settled $250 billion  worth of forex trades using blockchain in 2018. There were no details on the technology used or how it was done but they added that over 3 million trades and 150,000 payments had been settled using the new technology, still a small proportion of HSBCs overall trade but interesting nonetheless.