We mentioned sharp price declines last week, they have continued this week with bitcoin down to $4,500 as we write. For newcomers this can feel alarming but the following context for bitcoin drawdowns might be helpful

As to why the drawdown might be happening, there are a number of possible reasons.

Recent enforcement action by the SEC has also meant that some ICOs are repaying monies raised during 2017, notably in the last week Airfox and Paragon have both been subject to SEC litigation and will likely refund. Expect more SEC action and ICO bankruptcies.

We are exactly one year on from the peak of last years ICO hype, many projects that raised millions in Ethereum and BTC are now having to liquidate to finance their operations. Over $25 billion has been raised in total and no doubt some of those projects are now being panicked into liquidating their holdings by falling prices.

For me, this is not a real driver but has received a lot of air time. No doubt those behind the fork in bitcoin cash are having to liquidate holdings to support their own coins, estimates have them losing $0.5m/day and rising so this will bring selling pressure but not enough for the action that we have seen, that said the market may well be pricing in further selling.

Most likely volatility for the rest of the year. Remember though in the background thousands of developers continue to work on a new financial system amidst all this price drama. The internet of value transfer is coming, there will be plenty of “I told you so” from the traditional media and articles about “the end of blockchain”.

This is just another test this technology must pass, like the collapse of the Silk Road, like the fall of Mt Gox, like the multiple Chinese exchange bans and now SEC enforcement action. This technology is coming, it’s an unstoppable force.

Lightning network growth
The lightning network enables micro transactions with bitcoin through an ‘off-chain’ network of nodes. Launched early in 2018 it has been growing all year. Recently though there have been significant steps forward in capacity with a 300% increase in the amount of bitcoin in the system and the number of channels steadily growing. There is now around $1.8m in the system with 15,000 channels.  It is still small but transaction fees are tiny and settlement can be instant. This is a real world solution to a real world problem that payments globally dominated by two major players who are able to clip anywhere from 1-3% of every transaction we make. In 2019 the network will need merchant adoption to grow and merchants have a real incentive to take part with individual transactions costs less than a cent (in fact fractions of a cent). 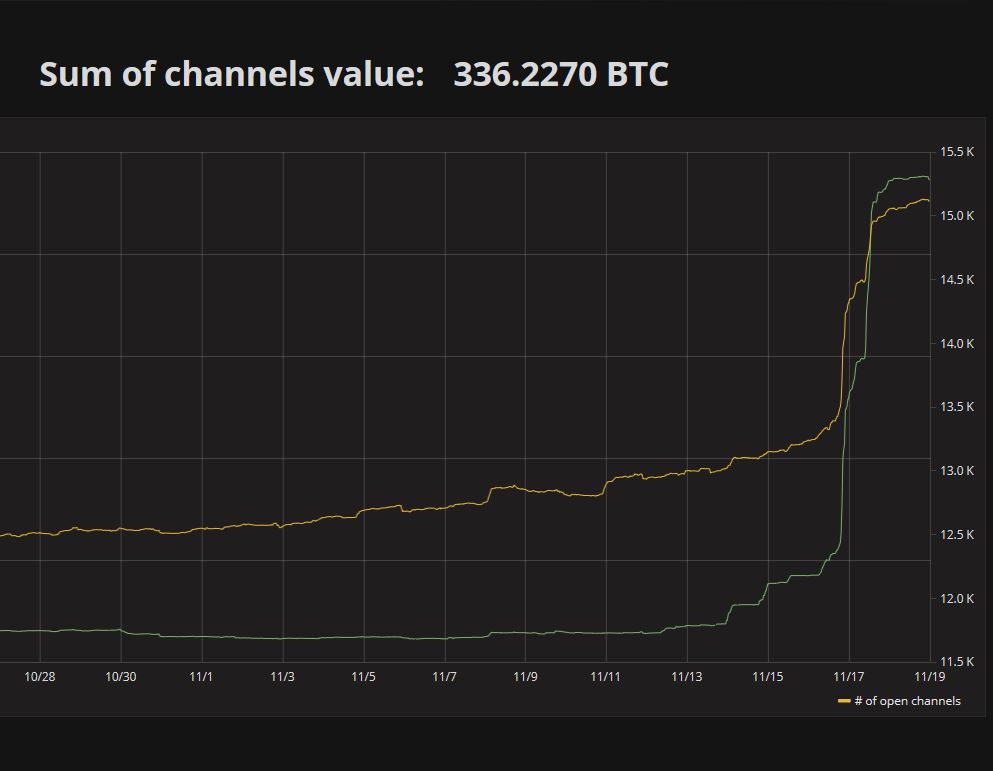 Largely as we predicted the hash war played out with Bitmain and bitcoin.com contributing some of their bitcoin hash power to support the new Bitcoin ABC chain. Estimates vary but it looks as though both sides are losing somewhere between $250,000 and $500,000 per day mining these chains instead of BTC. Both sides have significant firepower and plenty of BTC to liquidate if they need to. All this is likely to bring downward pressure on prices, it looks like economic madness and plenty of people in the market will be looking to relieve the participants of their bitcoin at what may one day be viewed as discounted prices. This one will run for a long time but even billionaires run out of cash in the end.

In the graph below you can see bitcoin ABC power spiking post fork and then falling back, expect them simply to expend enough money to stay just in front of bicoin SV.