Fidelity’s digital asset platform finally went live this week with a select group of clients. Minimal fanfare, the official line was “we will continue to roll out slowly to eligible clients”.  Great to have them on board, they have $2.46tn of assets under management, which alone is 40x the total bitcoin market cap.

Some more news on the tokenisation front this week as the Swiss stock exchange SIX has pledged to utilise the R3 Corda enterprise blockchain for tokenising equities. The goal of SIX’s digital exchange SDX will be to create a platform for the exchange of digital assets, starting with stocks and expanding to other tradeable instruments.

There are several competing blockchains that might host these equity offerings. Early indications are that digital exchanges are targeting permissioned and more centralised blockchains – going against what many had predicted to be a major driver of growth in Ethereum and other decentralised smart contract networks.

We aren’t yet convinced by this semi-centralised path. In reality, if you are hosting a tokenised equity on a centralised blockchain, you might as welll list on a traditional exchange. The concept of a centralised authority is deeply ingrained in finance, people will find it hard to let go and this sort of thing proves it.

Strong performances this week from some assets with Binance in particular up over 60% in the last 7 days. This has been driven by their continued strong performance both in terms of trade volume but also their product development, with interest in their decentralised exchange increasing.

Binance stands to gain considerably if the tokenisation of the world rolls out like many think it will. The bigger the blockchain ecosystem gets, the more opportunities for exchanges to profit. It’s been a strong recent run from Binance and they continue to look like one of the winners in the long game.

The chart below shows the extent of the correlation across the asset class, with Binance now starting to break free on its own. 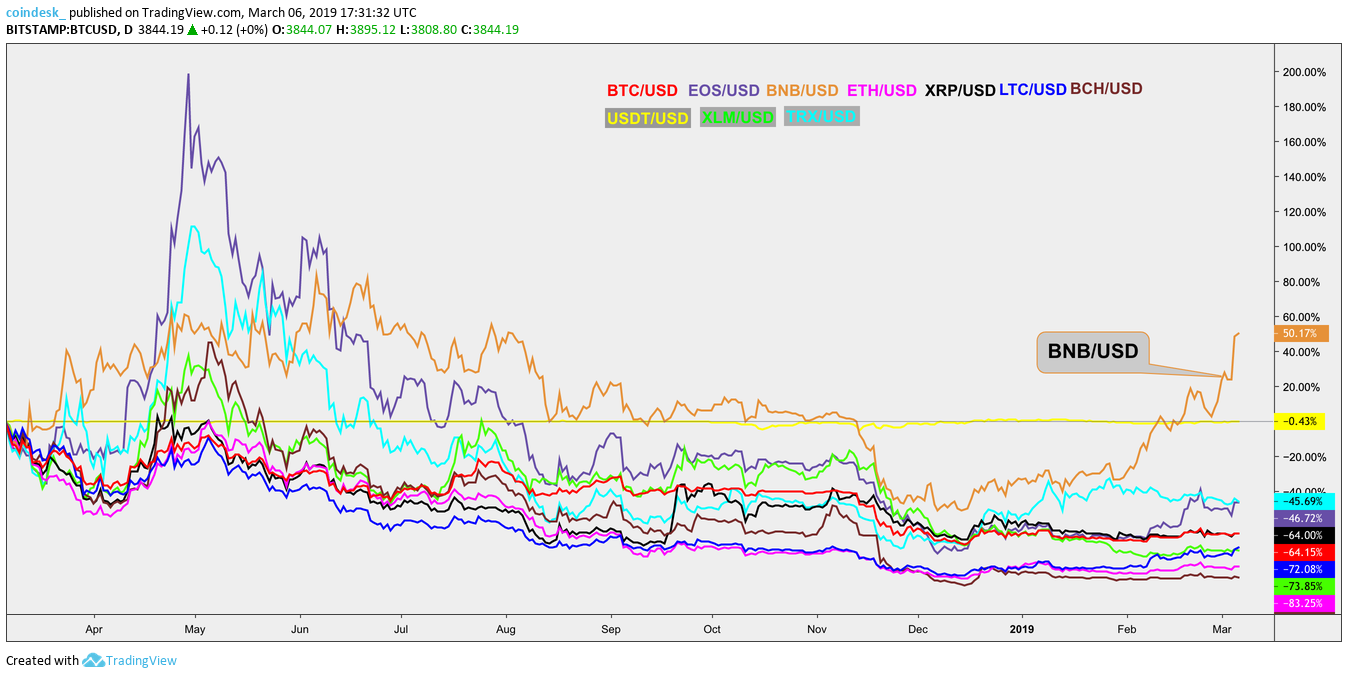 Crypto-mining giant Bitmain is still planning to list this year and recently filed further documents in Hong Kong as part of that process. Rumours are though that all is not well, with suppliers unpaid and their latest release of mining equipment having difficulties.

On the spectrum of risk, crypto-mining is right at the top. If you get it right you make billions, if not its game over. Here’s why:

The economics of chip manufacture have been changed by cryptocurrencies. If you make a very fast mining chip, you will make billions of dollars, you don’t need advertising, you don’t even need customers – just electricity.  Equally, if you spend fortunes trying to do just that and your technology isn’t the best, you have problems. Just ask Bitmain.
Developers
A lot of discussion this week around the developers who write and commit the code that drives the blockchains around the world. Depsite the bear market of the last year or so, there have never been more developers working in the sector than there are now. One of the reasons is that truly decentralised technology can never fall victim to the tribulations of mega-corporations like facebook, google etc. 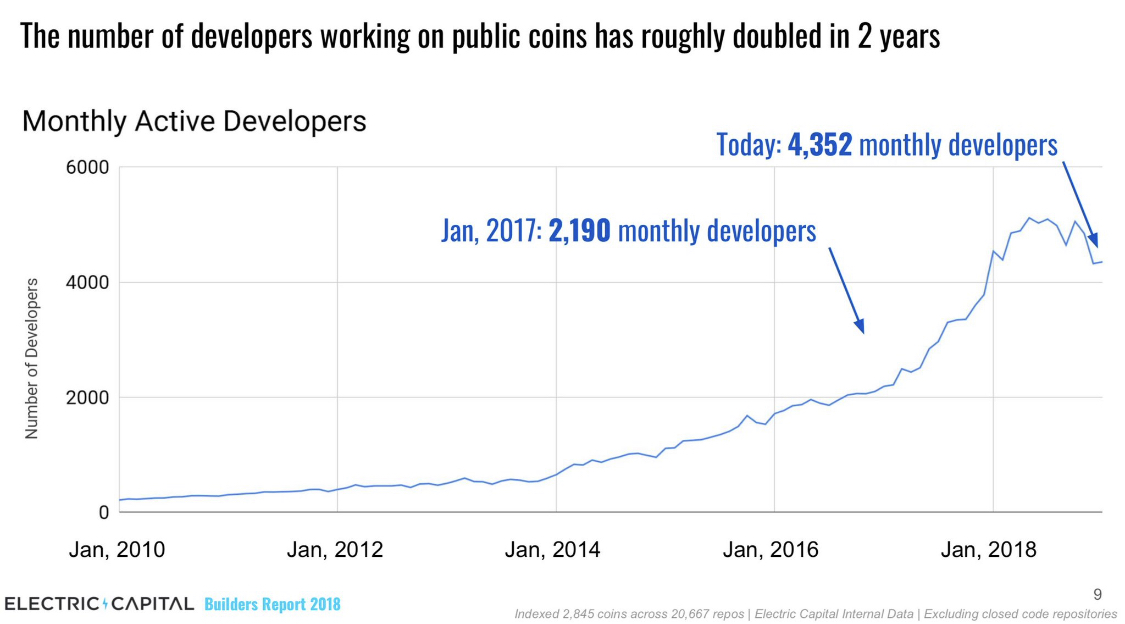 Developers working on crypto projects are free to do as they please, there are no performance appraisals, no objectives, no office, actually there’s no anything other than the code (including no pay in most cases). Development work cannot be monetised and monopolised in the way that happens with, say, Google’s algorithm.
Electric Capital (whose charts are published above) put out a report this week noting that the number of developers working on decentralised projects has doubled to 4,000 in the last two years.  Easily the highest number of developers work on Ethereum with the most stable group working on bitcoin. As I mentioned a few weeks ago on latest release of bitcoin code, some of these devs are elite specialists at the cutting edge of their fields. Their growing numbers is a big vote of confidence in this technology since nearly every one of them could find a high paying job at at Bigprofits Inc.
There is something compelling in the economics of decentralised technology that these 4,000 people know and that most of the rest of the world is yet to work out.