Amid the wild price ride of the past few weeks there have been some serious developments that give us a glimpse of where this sector might go in future. One you will have heard, Facebooks Libra (covered here last week) and one you may not have, Blockstream’s atomic swaps.

Blockstream are becoming rather famous for dropping major pieces of technology with little fanfare. Last year they put a satellite in space that beams the bitcoin blockchain around the world and prevents the loss of coverage of bitcoin if the internet were to go down. This week they released atomic swaps on liquid.

The short summary is this. Liquid is a bitcoin sidechain, it can host assets so users can issue their own tokens – those tokens might take the form of equity in a company or a stable coin or a token backed by another physical asset. All of this is then hosted and secured on the liquid sidechain which is (crucially in our view), anchored in the bitcoin blockchain. Transactions on this sidechain take seconds.

Here are some ideas:

All the above can be done with the technology released (in test in the case of Libra) in the last 3 weeks.
These developments, some announced with great fanfare and the best ones without, are coming at us fast.
Wall Street
A busy week as more institutions enter the world of crypto.

Firstly, Goldman Sachs. Their Chief Executive this week revealed that they are carrying out extensive research on tokenisation and that we should all “Assume that every major financial institution around the world is looking at the potential of tokenization, stablecoins and frictionless payments.”

It makes sense, even if you hate bitcoin or other cryptocurrencies. It is far quicker to settle a contract with a USD stablecoin than actual USD through traditional banking channels, it’s milliseconds versus days and costs cents rather than tens of dollars per transaction.

Secondly, The Commodity Futures Trading Commission (CFTC) has cleared bitcoin derivatives provider LedgerX to offer physically settled bitcoin futures contracts. They aren’t the first to receive approval and they have a very long waiting list of clients waiting to integrate with their platform. Physically settled contracts are important for bitcoin, because the transactional loop of the contract can be completed outside of fiat. At the moment, CME futures are cash settled so whatever happens, at some point, you have to deal in USD.

Finally, Henry Kravis founder of investment giant KKR, has invested in a crypto fund, ParaFi Capital. Bain Capital are also investing in the fund, one of their partners Salil Deshpande had something rather interesting to say:

“some liquid crypto assets present asymmetric return opportunities’’
Indeed they do.
Bitmex
Some big milesstones for BitMex this week as they hit 1 trillion US dollars of traded volume for the rolling year and also hit a record for open interest in their perpetual swap contract, 1 billion USD. BitMex launched in 2014 and provides futures contracts for the bitcoin market. The sheer volume they now process demonstrates the level of demand for their leveraged products and their presence is actually helpful in driving the case for an ETF, clearly the SEC can see the demand and the level of sophistication of the market.

The problem with BitMex, if there is one, is that they are a Seychelles registered company, although physically they are based in Hong Kong. At these levels of volume I expect them to come in from the cold quite soon. 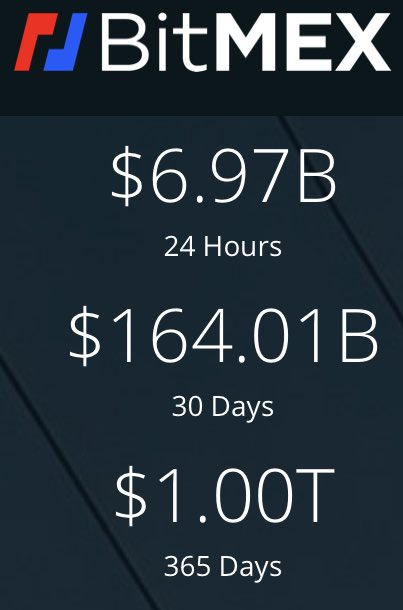 Alt coins suffer post Libra
As we discussed last week, since the announcement of Facebook’s Libra coin many alternative cypto currencies have suffered relative to bitcoin. In particular, the smart contract protocols EOS and Ethereum have suffered down 31% and 8% respectively.

We believe the reason for this is that Libra has its own programming language known as Move. It has been designed specifically designed to address some of the issues encountered by EOS and Ethereum. Expect a tough run for alt-coins as the arrival of Libra plays out. 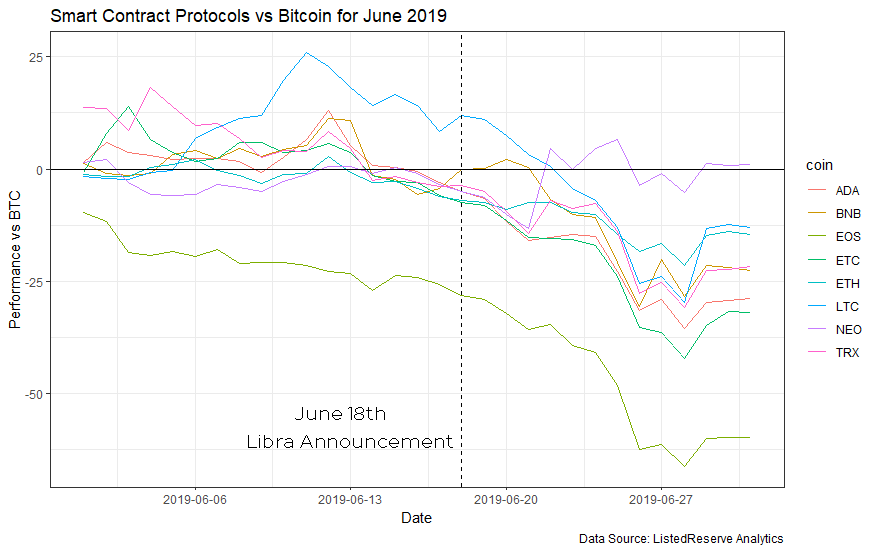 Final thought
There are two monetary experiments running in the world right now.

It is possible experiment 1 is starting to fail and the proof is leaking out in the data. Italian bond yields moved below US bond yields this week.  Then, Spanish 7 year bond yields went negative for the first time ever. To be clear, it actually costs you money to lend money to Spain for 7 years. These countries are not solvent without Germany.

Experiment 2 might also fail, but I much prefer its odds and potential payoff.