On Friday last week Facebook received a letter from the US Attorney General, Britain’s Home Secretary and Australia’s Minister for Home Affairs.

You see, it’s all about your protection. You simply must be protected, meanwhile the government will continue to use full end-to-end encryption because we don’t need protection from them.

The letter then takes a rather dark turn, its entire focus becomes about ‘the exploitation of children’. Children are mentioned eight times, terrorism for example, is never mentioned. Tax evasion, never mentioned. We want access to your encrypted communications solely to protect people from the thing they fear the most, that something terrible should happen to their children.

Maximum public fear is the strategy in this fight. Encryption is absolutely a threat to sovereignty. Encryption is a weapon, it was protected by governments for decades as a weapon of war and they have been desperately trying to restrict its use ever since. However, it is now so widespread that it cannot be banned. So, scare people. Choose a platform many people use, Facebook. Attach that platform and the technology you don’t like to something people genuinely fear, the exploitation of children. Then, insist it must be stopped.

Expect this fight to come to bitcoin too. Encrypted money is similarly a threat to monetary sovereignty. You have seen (as we document again this week) the strength of government objection to the Libra stable coin, not just in the US but across Europe. Bitcoin finances terrorism, child exploitation, drug use, the negative headlines have been and will be unending. The whole point of bitcoin though is it is a decentralised system. No CEO, no company, no offices, no servers, nothing for the government to go after. So, unfortunately for Zuck, he will have to take one for the team.

The fear will be ramped up from here until you’ll be scared to leave your house in case the encryption boogie man jumps out of a hedge and steals your children. Sounds stupid, but it’s coming. Encryption was once for messages, now with crypto-currency, it is for personal wealth too.  The encryption genie is never ever going back in the bottle but governments won’t go down without making it a very big fight.

The full letter from the governments involved, which is one for the ages, can be found here. Two of the most powerful military nations on the planet (and Australia) begging a private company not to use weapons they don’t like. To save you time, I have summarised it for you:

“We know our aircraft carriers don’t work for this kind of thing, would you mind playing nicely?”

On the same theme, the Libra Association is starting to wobble. You may recall, that when Libra was announced the founding members of the association included Paypal, Mastercard and Visa amongst half of Silicon Valley scrambling to jump on the Facebook gravy train.

The first to crumble this week were Paypal, who have now withdrawn. Paypal CEO Dan Schulman had this to say back in June.

“We believe that our more than 20 years of payments experience can not only contribute value to the Libra Association, but it gives us the opportunity to work with and learn from other organisations.”

Zuckerberg has decisions to make, his currency is under pressure, his encrypted platform is under assault. He either doubles down and goes for it or he folds. I think he’ll roll the dice, what US politician would dare be too horrible to Facebook with elections pending?

Hong Kong’s Chief Executive Carrie Lam invoked emergency powers this week in an attempt to quell the unreset in the territory. Those powers include rights to seize bank accounts and property without reference to ordinary legal procedures.

As a result, localbitcoins has seen a huge increase in activity in the territory (localbitcoins enables users to exchange physical cash for bitcoin). The spike exceeds the volume seen during the late 2017 bitcoin boom.

….it’s encrypted you see, so nobody can seize it from you if they do not have the private keys. When the sky falls in, that turns out to quite a handy feature. It’s not just the Hong Kong government that is finding this out, they all know it.

Time for a check in on the US debt clock, currently at $22.8 trillion and now rising at a rate of in excess of 1 trillion a year. The US went through $22 trillion in February.

usdebtclock.org really is a fascinating website. Lot’s to play with, in particular check out the time machine in the top right corner, it shows the various deficit projections for 2023. At current rates heading for $30 trillion, that’s an awful lot of US bonds between now and then. Consider that implies the total supply of the most popular asset globally for investors is going to rise by 36% in the next 3 years, this at a time when baby boomers are trying their best to sell them.

Fear not though. The Fed will buy them all with freshly minted dollars. 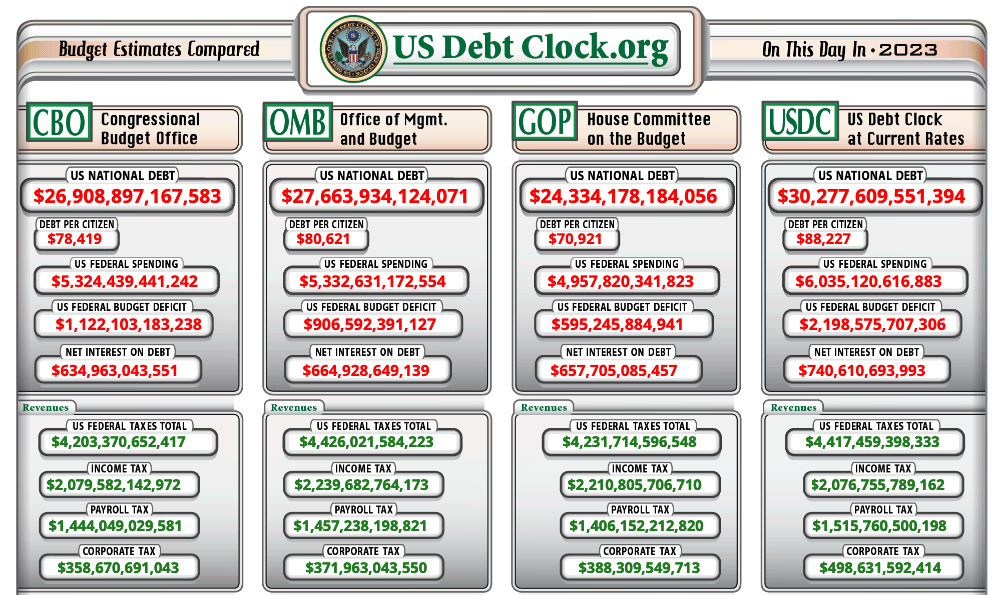