When was the last time an asset with a market cap of over $180 billion experienced a 40% price spike in hours? The answer is hard to find, but the oil price in the 1970s is the best example. It happened again on Saturday morning with bitcoin registering a 40% upward move in the space of 12 hours. It is currently 25% up from Saturday’s opening price.

I have read many theories on why in the days since, including that Xi Jinping mentioned the word blockchain on Friday but I believe the reality is much simpler.

99% of the world are short bitcoin, anyone who doesn’t have any, is short. Traders also take leveraged short positions without the backing of bitcoin as collateral and they are horribly exposed. When most of the world is short and you’re short where do you find the collateral to cover your position? Answer, you don’t. You get liquidated and the short squeeze crushes you.

You might recall in August we wrote this about Bitcoin futures.

“Longer term, I think these products will produce real fireworks. Generally futures are useful for calming volatility over time but bitcoin is not like other financial products, a lot of people still cannot compute what limited supply means (because almost nothing else has it). Over the next few years that lesson will be dealt out to someone on the short side.”

…..and this weekends lesson was an expensive one. I doubt it will be the last.

Since the price rise was so freakish it is worth exploring a bit further. Firstly, I’m not surprised by a price move like this and expect the situation to get “worse” for people who don’t own any bitcoin. Simply because the new supply will decline so sharply in May next year, I find it hard to think that volatility will fall.

More broadly, at US$10,000 per bitcoin, roughly $9m worth of bitcoin are mined every day. That’s still significant amounts of inbound new money required to keep the price flat. The new futures products are off to a slow start and it seems clear that institutions are tip toeing into bitcoin and not flooding in, a good thing. I think a price level of anywhere $7,500 – $10,000 represents the current ‘natural level’ but that is a very hard thing to estimate given the supply curve. The supply curve is so poorly understood that price does not appear to accommodate future supply shocks even though they are known, perhaps because the risk premium is so high it is sufficient to discount those shocks.

Moving forward then to the next supply shock in May 2020. At this point the new supply of bitcoin will halve. Now only $4.5m (at current prices) of bitcoin will be mined daily.  I would note that Square (the US cash processing business) sold $125m of bitcoin in Q2 this year. One business alone consuming 30% of all new supply? Then add Grayscale, then add Fidelity. What then?

This weekend proved something simple. There just aren’t many bitcoins, that’s the whole point. The world is conditioned to having what it wants, when it wants. Just pull out your credit card and print money you did not previously have, easy. You cannot do that with bitcoin though, there is no Federal Reserve here. If you get caught on the wrong side, the squeeze can be epic.

To conclude then, if I could sign for six months of sideways movement in the $8,500 – $10,000 range I would take it right now. I will circulate something to investors about approach to the halvening in the next few weeks. If you’re not an investor, look at last weekend and don’t be short.

Bank runs don’t happen anymore. We certainly thought so in the UK in 2008 but it happened fast, one day fine, next day a crisis we still haven’t recovered from.

Currently in Lebanon the banks have been closed for 7 days and confidence in the banking system is falling fast. Cut over to Argentina, you can now only buy $200 per month of USD with Peso compared to the previous $10,000, there is a stampede to leave the local currency.

These currencies have been devalued to the point of uselessness. It’s also clear that money in a bank is not your money. If the circumstances are right you can have your money but if they aren’t we’ll need ‘temporary measures’ to protect you.

The whole point of cryptographically protected assets is that they are yours. The government cannot access them, cannot corrupt them through supply disruption. Every day around the world some government somewhere runs a brilliant advert for cryptocurrency. My favourites below, Venezuelan lunch money, the boarded up bank of Lebanon, protest murals in Paris and finally the repo rate in the USA…….somethings up for sure.

Government debt continues to rise almost everywhere, with the possible exception of Germany, which is still scarred by past hyper-inflations. The graphic below illustrates the theoretical absolute number of bitcoins each countries debt represents.

At today’s price, the eight countries involved have debts that equate to 6.37 billion bitcoins. There can only ever be 21 million bitcoins, so such a re-denomination of debt into hard currency would make a single bitcoin worth US $3.2 million. Not going to happen I hear you say. That’s probably correct, government debt will just keep on going up forever and ever, right? 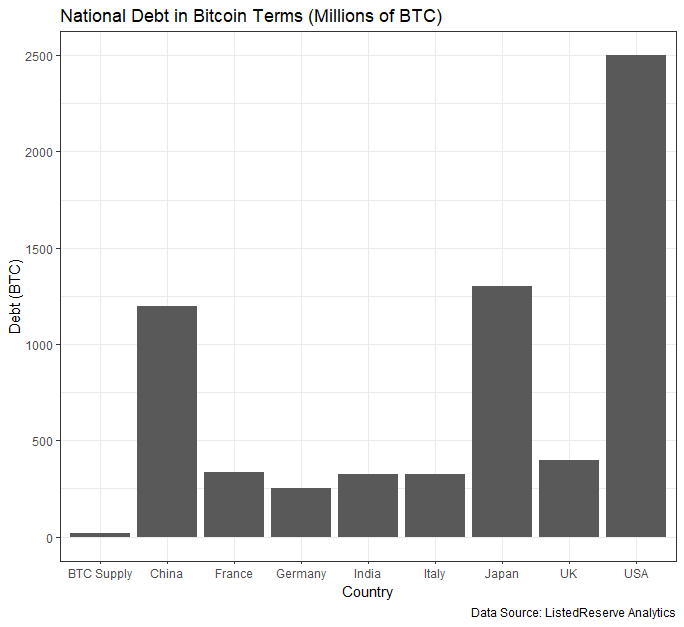