The best advice I can give about the bitcoin price is not to look at it. Over time the price has risen, although it does so in a non-uniform manner. This year is a great example, we have been to $3,900 and $10,500, the sort of volatility that can age a person. Perhaps a better way to look at price is in trailing twelve month format, the path is considerably smoother.

You still see the impact of the 2017 frenzy where the price touched US$19,500, but actually it was there for a matter of days and very very few people actually engaged with it at that level. Nonetheless it lives large in the consciousness of the public and the press. 2018 was tough, with a steep pull back, what you cannot easily tell from the chart is that late 2013 to early 2015 was just as bad, sharp pull backs are part of the process of adoption.

On a yearly moving average we are now approaching an all time high. That makes sense as we have bounced around $8,000 for what feels like a long time now. 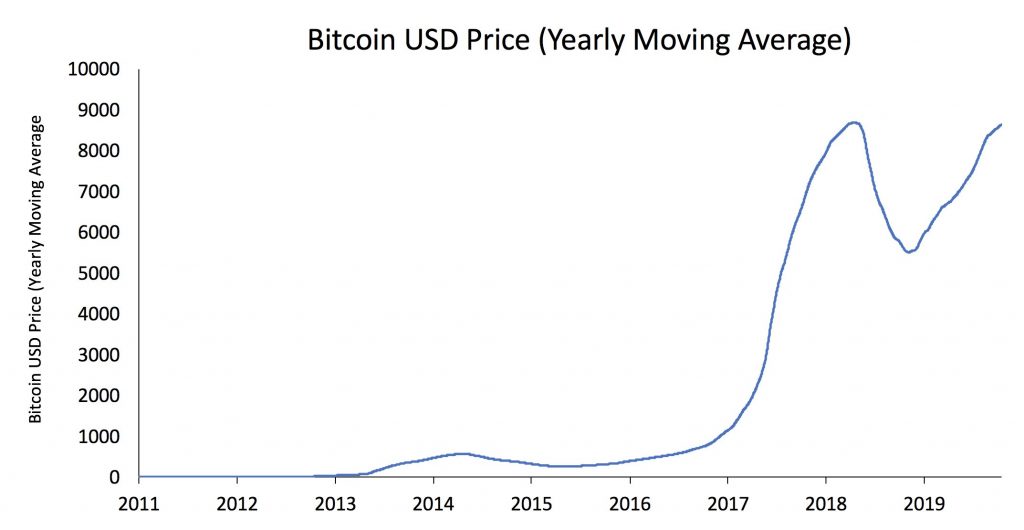 To emphasise the point, here’s a spaghetti soup chart. It shows the returns to bitcoin holders who bought on the 1st day of every month for 4 years. The longer you hold the, higher the return. The annual returns for those cohorts have been enormous. 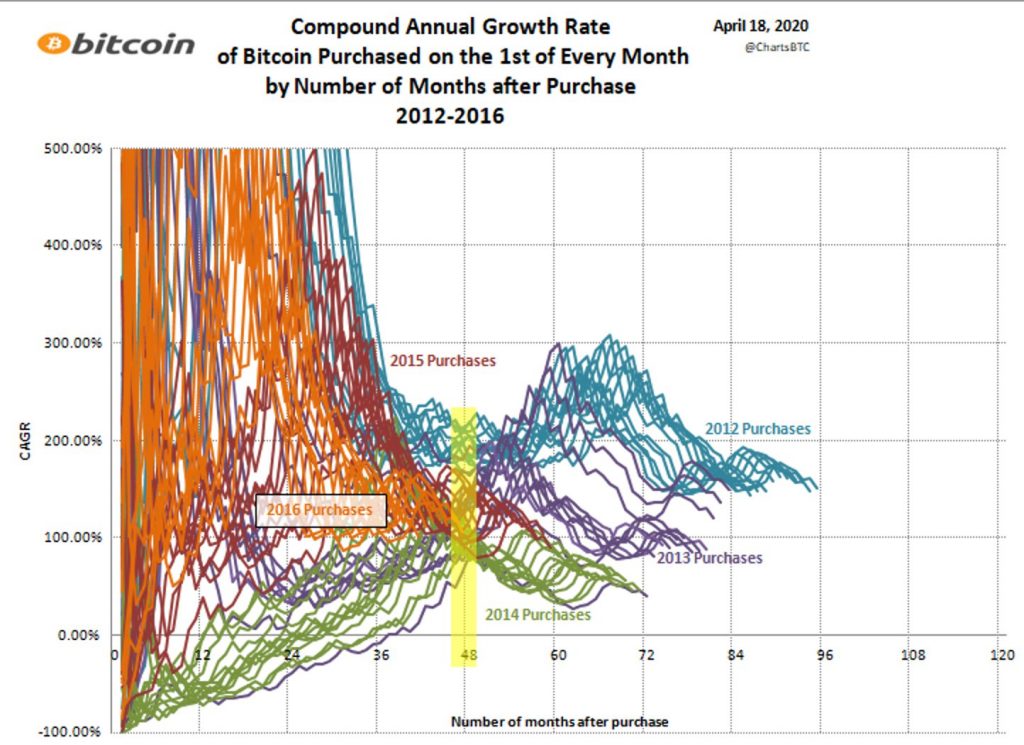 What do you own?

Answer, less than you think. The issue with most assets is that they are in some way vulnerable to government action. For example, a favourite in the Western World is property. Investors love property because of its tangibility, ongoing demand and favourable tax breaks (at least in Australia). Property of course has a problem, it is highly visibile, highly traceable and accordingly easily taxable. In these trying times where government deficits might rise to 50% of GDP in a single year, where will the government collect their money? The usual sources of income tax and corporation tax might already be exhausted. Transactional taxes will not deliver in a depressed economy, so land taxes are next.

The reality of land is, that it is yours as long as the government lets you stay on it. If you don’t pay your tax or they want to build a shiny new road, it’s not yours anymore.

Gold is another example. People like gold since such high value can be held in relative small space due to the scarcity and density of the precious metal. Once again, gold is great unless the government takes it off you. Unlikely? As we discussed a few weeks ago it is less than 100 years ago that exactly this happened in America.

Governments like control. Control the money, control the message and control the public. That is why they do not like cryptography, since you can communicate a message that they cannot control. Now we have money that is protected by cryptography, the government cannot control it. In the eyes of Government, it is evil because it is yours. It cannot be seized, it cannot be arbitrarily taxed since ownership records are private.

The tax base is falling, government spending is rising inexorably. They will come for your assets and in the next ten years we are all going to learn a lesson in how little we actually own ourselves.

Half a billion from a16z

In 1993, Marc Andressen (now of Venture Capital giant a16z) invented the first web browser, Mosaic. It’s amazing that it is recognisable even today as a web browser, not much has actually changed. Indeed in the end Microsoft licensed it as the basis of their own internet explorer.

Since then Marc Andressen has been a very big supporter of cryptocurrency, he coined the term “software is eating the world”  and he has been right since the day he said it. Now he is launching his second cryptocurrency fund for which he has raised $515 million.

The article explaining why is well worth a read. My personal highlight was this:

“We think the next wave of internet business models will come from crypto. Rather than engaging audiences through centralized gatekeepers that charge high rents and create self-serving rules, creators can use token models that bypass gatekeepers and give their fans a direct stake in their success.”

This guy believes in software and he believes software can be money. So far, he has been right.

I recently read this book on encryption. It tells the story of PGP, an encryption program written by Phil Zimmerman that now exists on almost every computer worldwide (every Mac and every PC, although you probably never use it).

Despite the epic tale of the National Security Agency, the FBI and leading mathematical scholars doing battle to crack encryption across 25 years, the book is badly written and boring.

Even so, I can tell you this. The US government has been in a battle to stop encryption software since the 1970s. They have not stopped since. Even today Attorney General William Barr, constantly campaigns for back doors to encryption software.

The best bit though……in 1991 a Senator, who it is alleged was passed this wording by his friends at the FBI, introduced draft legislation known as Anti Crime Bill s266. It required that:
“providers and manufacturers of communications equipment shall ensure that the communications systems permit the government to obtain a the plain text contents of voice, date and other communications when appropriately authorised by law“
The law would have required encryption back doors in all hardware and software but it never passed Congress. However, Phil Zimmerman could not have known that at the time and immediately on reading the draft legislation he released his program on the internet.The genie jumped out of the bottle, it quickly spread around the world (despite US export law forbidding its transfer overseas because encryption is a “military weapon”). Inadvertently then, it was forced into the open by a predatory Senator and we now have encrypted internet, encrypted messaging and encrypted money.