As expected, the latest Bitcoin spot ETF was rejected by the SEC on Friday. It is nearly nine years since the first ETF application was filed by the Winklevoss brothers in 2013. At that time investor protection was front of mind and it allowed the SEC to successfully protect everyone from a 23,000% gain since that date.

Their most recent explanation simply defied belief. Apparently, bitcoin prices are too susceptible to fraud and manipulative acts. That may be true but having already approved a futures ETF it does not make sense. The futures price for bitcoin is directly correlated to the spot price, clearly if the spot price is impacted by manipulative behaviour, that will absolutely flow to the futures price.

The SEC make clear that they have access to every single futures trade, which they don’t have in the spot market. Again, that is nonsense because offshore futures is a far larger market than the US regulated bitcoin futures market. The reality is they probably have more visibility on spot trades than futures given the size of offshore futures relative to the US market.

The response from the industry for a long time has been to shrug shoulders and carry on but it is increasingly difficult to do so, more and more people are speaking out because the approach is now clearly ridiculous. These comments from the founder of Messari crypto summarised the mood well. 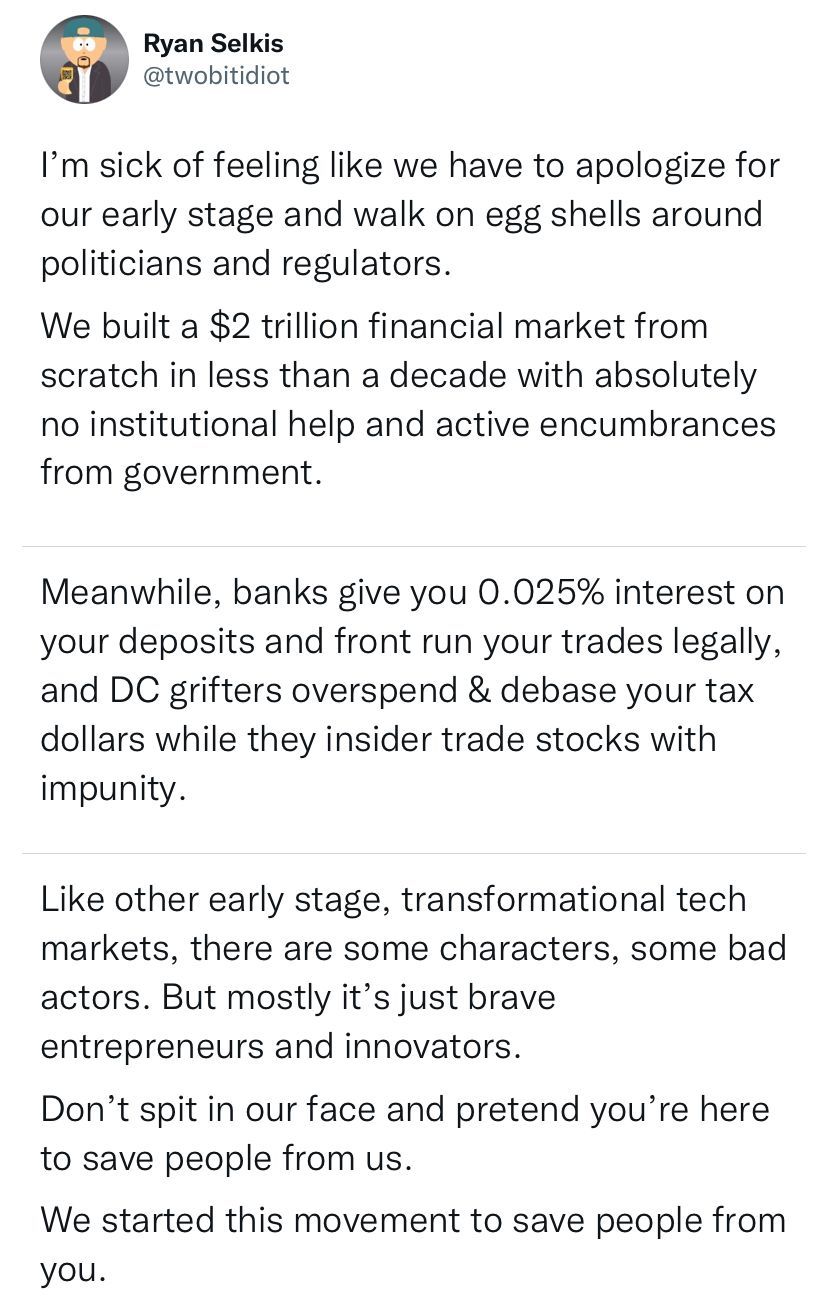 As far as market manipulation goes, I’m sure that it happens in bitcoin. It trades 24/7, almost nothing else does. In periods of thin liquidity there is an opportunity for large traders and holders to influence the price.

What is market manipulation though? If someone with a large bitcoin holding moves those assets around exchanges to try and lower the price for new entrants, so what? The big stock exchanges close if the price moves a lot. If the NYSE dropped 20% it would close for the day. Is that not manipulation?

Few people know that bitcoin has more trading hours under its belt than the NASDAQ (which launched in 1971 and trades only five and a half hours on weekdays). For that reason, we consider bitcoin a very pure market indeed. There is no intervention ever, whatever happens. Perhaps one of the few assets in the world that has true price discovery.

Looking to the bond market. The Federal Reserve now owns 25% of all outstanding US debt, and underwrites the price of those securities with its QE program. Is that not manipulation? It must be the biggest market manipulation in history.

When Nancy Pelosi’s husband buys Alphabet call options just before a vote on Anti-Trust legislation and makes $5m when it goes his way. Is that not market manipulation?

Why is bitcoin held to a higher standard than every other major trading asset out there?

We hear a lot now about Web 3.0. It’s far from obvious what the various iterations of the internet mean. The clearest explanation I have seen in this.

This breakdown resonates. Early experiences with the internet involved checking the weather via dial up modem in the early 90’s. It was late that decade before email really exploded and another decade before social media fully built out the person-to-person connectivity of web 2.0.

No wonder legacy institutions are worried; they are being eaten alive. 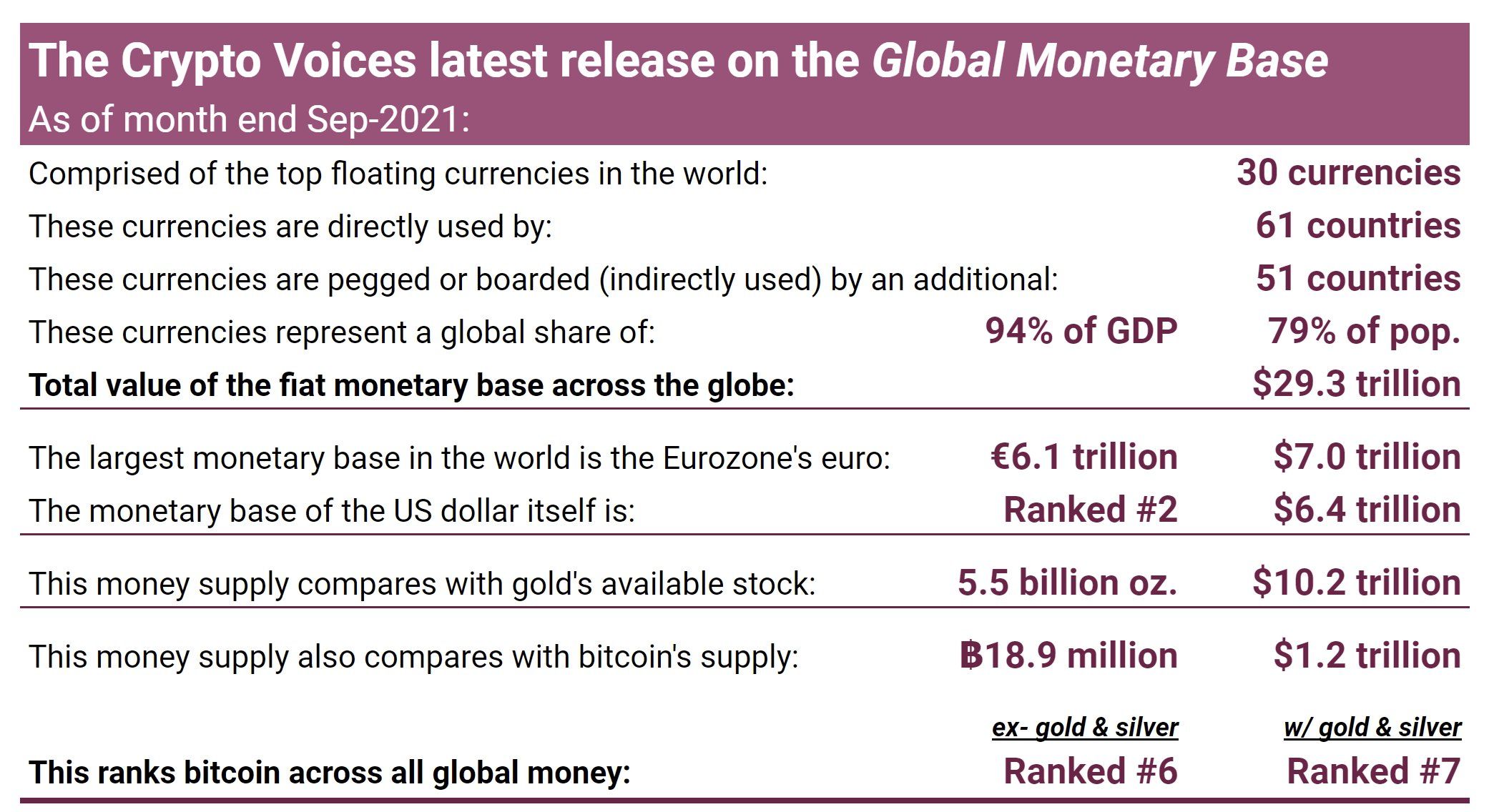 The quarterly currency update from Crypto Voices showed that bitcoin is now ranked 6th in global money terms. We are fast approaching the oldest currency of them all, the British Pound.

The top five positions are held by what are known as “major currencies”, getting there requires a 5x move which would overcome both the Japanese Yen and Chinese Yuan. It would imply a bitcoin price of US$300,000 which most people will tell you ridiculous. Of course, those same people would not believe that fiat currencies have lost 99% of their purchasing power against bitcoin since its launch. 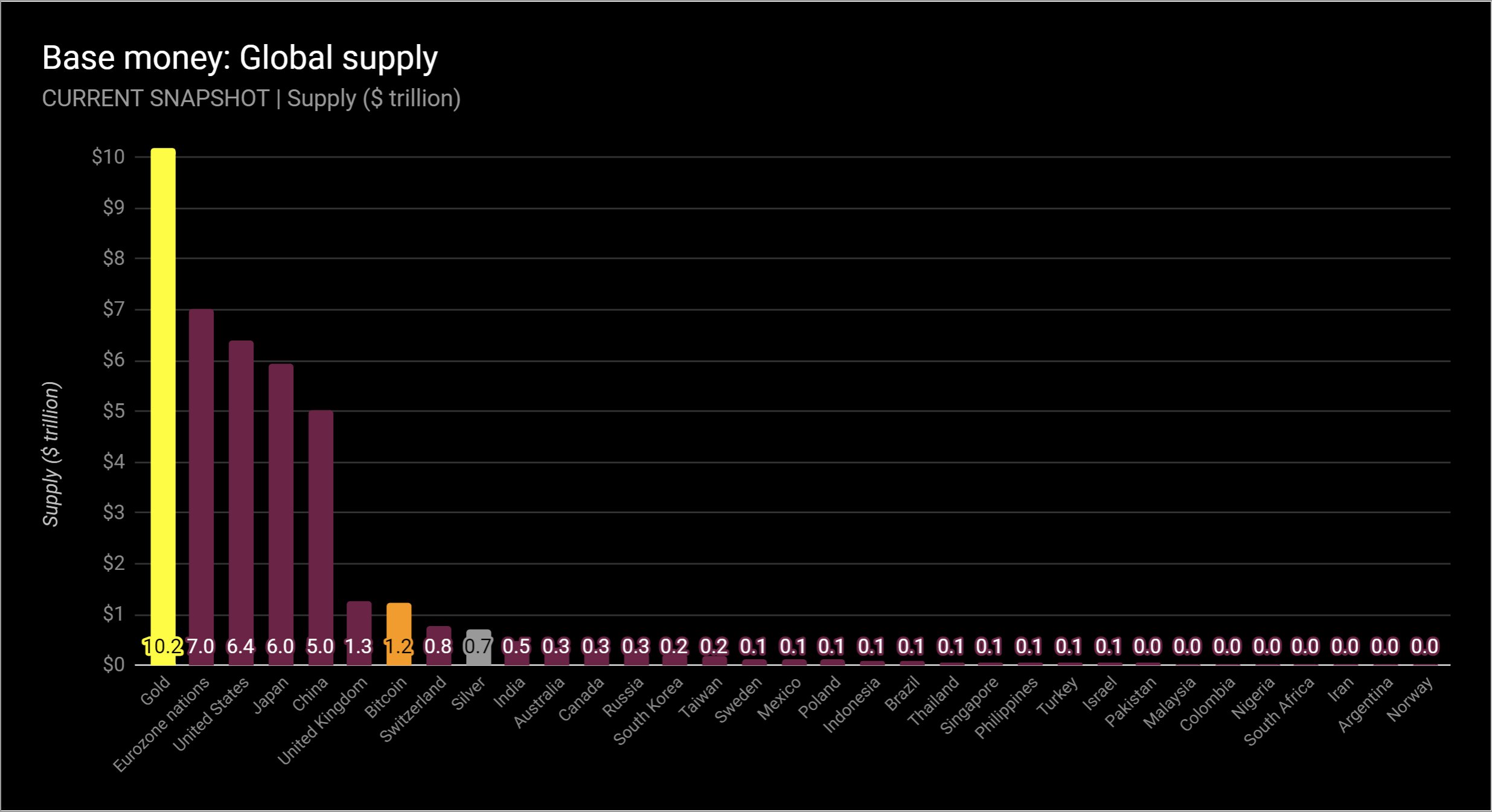 There is more to the value measurement than simply fiat currency though. We are currently at only 12% of gold’s value and a tiny fraction of the bond market.

A long way to go then but clearly the journey has begun. 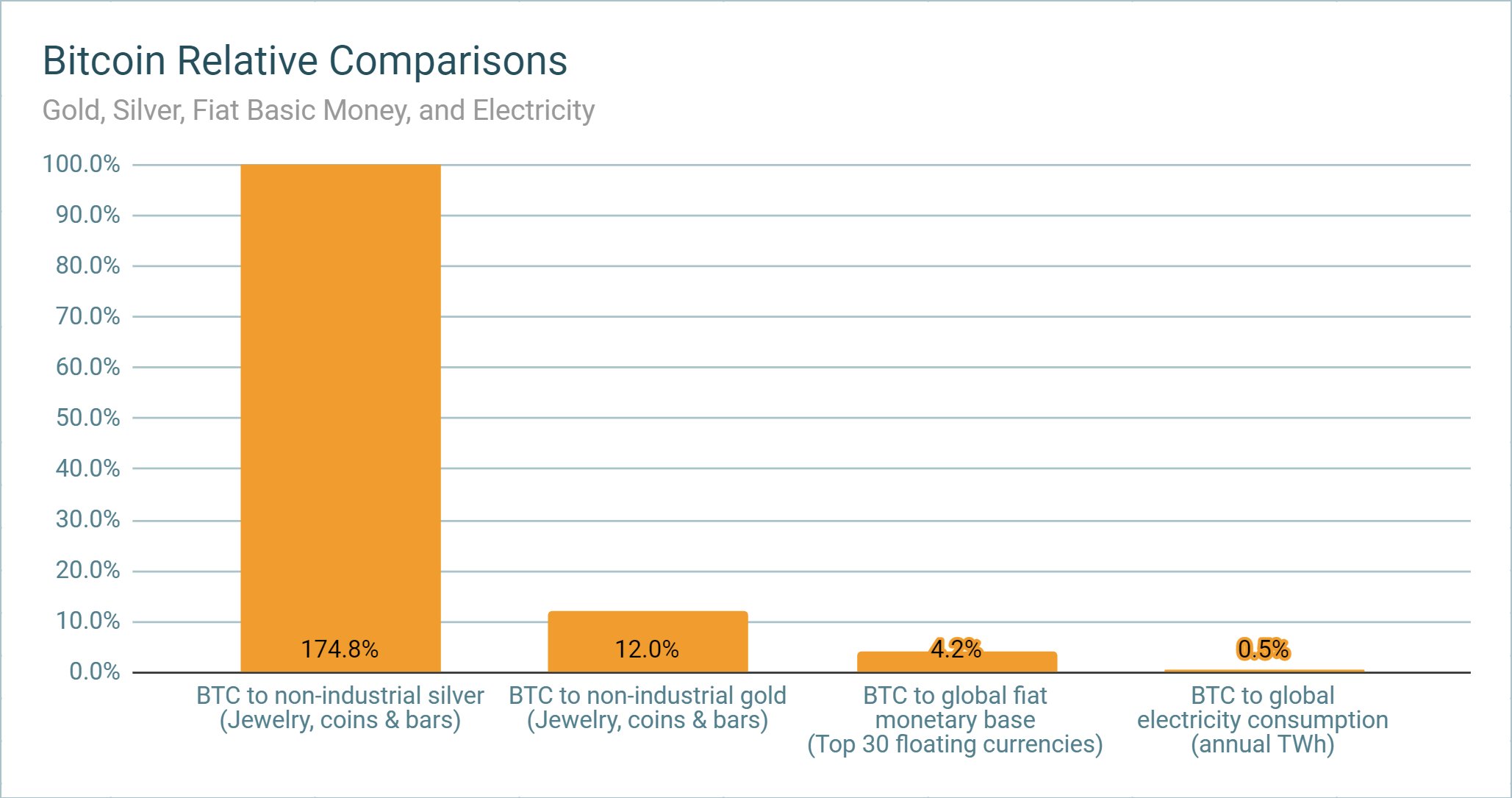 One of the most popular pieces of bitcoin mining equipment is known as an AntMiner. They look like this.

The latest Antminer is a significant step forward in computing efficiency. For miners, speed of calculation is very important but it is not as critical as efficiency. The machines must use the minimum electricity possible to make the mining operations viable. Electricity is the most important cost consideration after the purchase of the machines.

The measurement of efficiency is energy use per unit of calculation. So how many calculations can this machine do per joule of energy? 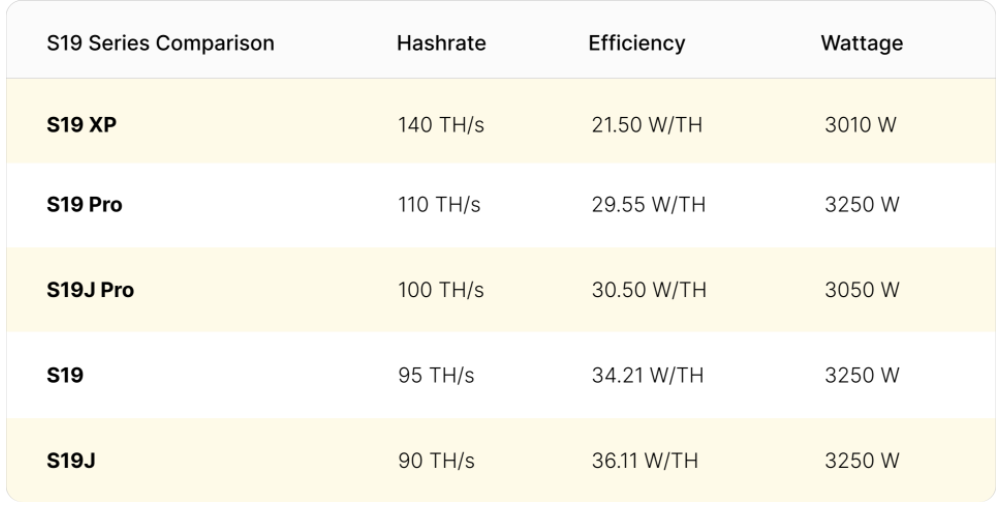 The ability to convert such small pieces of energy into astronomical calculating power is really something, but the rate of increase is no less impressive. The latest device is 37% more energy efficient than its predecessor and 68% more efficient than the S19J.

If we go back just two years, we are looking at 190% improvement in efficiency over the Antminer S9s.

The narrative around energy use and bitcoin is near universally false. Nothing is pushing the boundaries of efficiency like bitcoin and almost nothing relies so purely on efficiency as bitcoin mining. Clearly there are many other industries for whom this is relevant but there aren’t many where it is the whole game.

If you believe in Moore’s Law and hope computing power can continue its march pushing the boundaries of humanity forward, then look to bitcoin. Some things are part of the solution that we are all looking for and other things are just noise and posturing.

One of the most popular pieces of bitcoin mining equipment is known as an AntMiner. They look like this. 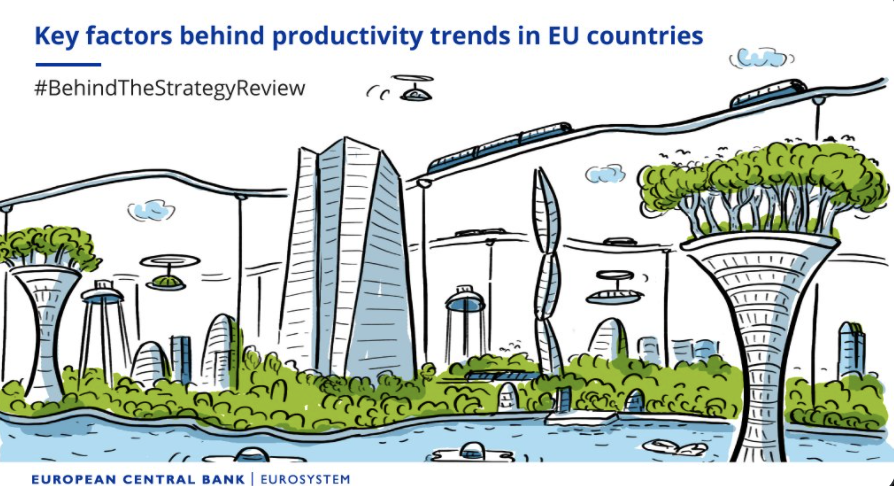 A rare case of honesty from the European Central Bank. On seeing their latest Strategy Review image, we might imagine the ECB thinks soon we will be flying in cars through a tree filled skyline but their report tells a very different story for Europe.

It is quite the opening gambit, because it directly correlates with the launch of the Euro and the period under ECB direction. Labour’s share of Europe’s GDP has done nothing but fall and people in Europe, on the whole, have done nothing but get relatively poorer.
The evidence provided here is the number of technology patents filed by European companies which has been falling for a long time. Mostly that’s because manufacturing drives patents, most innovation comes from the factory floor. There are fewer factories in Europe now and China leads the way in patents and innovation. Globalisation was called out as a cause, even though for many years it was pushed as a wonderful thing, it seems it is now less wonderful.
Yes. Few people choose Europe as a place to start a family, it is expensive to buy a home, complex to navigate the regulations and crucially monetary policy settings are designed to suit the largest cohort, the old. Younger Europeans are faced with a terrifying debt burden that they cannot hope to pay. All their efforts at progress have been, and will continue to be, eroded by money printing and government interventions.
Faced with that, what young person would choose Europe as a place for anything other than a holiday? All the talent leaves Europe and who can blame them. There are very obviously better places in the world now for the highly skilled.
The killer blow in the report is one of the proposed solutions:

This is just pure fantasy. Green technology might help, but because it has been force fed for the last decade, as opposed to being market led, Europe is now running out of power. German manufacturing is not at full capacity this winter because of that power shortage, nothing could be more crippling for productivity than factory closure. There won’t be much ‘digital uptake’ either because if anyone innovates it is generally frowned upon when an incumbent industry is necessarily impacted.

Speaking for our industry, nobody wants to go to Europe. The complaint list is long:

There are so many examples. The ECB itself could not be more anti-change if it tried. For example, they are stridently anti-bitcoin. They are actively working to ban stable coins even though they have the best intentions in doing so.

The problem with innovation is it happens however it happens. It is ruthless, merciless and ends up crushing old industries and creating new ones. In so doing it releases new ideas, new opportunities and growth. You either accept the pain that comes with it and let growth and productivity flourish, or you stand in the way.

The ECB’s report proves they stand in the way. For once they are honest. They don’t say it, but they are the problem.