Before we begin, I should make clear that ListedReserve has no exposure to FTX or the FTT token. This week’s drama being a good lesson in why segregated custodial arrangements for digital assets are vital.

I suppose they will make a movie from this one day. In the battle of the crypto-billionaires this week there was only one winner, but before we get into it, some background for you.

Back in 2019, Sam Bankman Fried (SBF) was a proprietary trader through his firm Alameda Research. He got frustrated with the trading platforms available in the industry and decided to start an exchange known as FTX. To do so he raised some money and also launched a token known as FTT, which would be used to provide discounts to traders on the platform amongst other things. One of the investors in FTX was Binance, the world’s largest crypto exchange. They took what was essentially a defensive position by taking a stake in what might be a large competitor.

Fast forward two years. It’s 2021, FTX is big. It raises a huge funding round at a valuation of $25 billion. Binance takes the opportunity to exit their investment and receive $2.1 billion equivalent in USD and also FTT tokens. Things are friendly-ish between the two mega exchanges.

Now it is 2022, SBF is extremely active in the lobbying space and very high profile, with lots of political donations. Only five days ago he tweeted about donations to both sides during the mid-terms. It appears though the connections he was building were being used to put a moat around FTX at the expense of overseas operators. Fair enough and standard practice for US businesses.

CZ got wind of this, presumably because he too spends a lot of money lobbying.

So now it is interesting. CZ has $500 million of FTT which he announces he is dumping on the market. This causes a complete stampede out of FTX. Everything is A-OK though says SBF.

Then on Wednesday, everything was not OK. The FTT token completely collapsed. Down ~90%. This shouldn’t really matter though unless the FTT token has been used as collateral somewhere, which would be a very dangerous thing to do because these tokens are particularly volatile. Enter CZ once more:

So it appears FTX has been using its own token as collateral for its perpetual futures products, which is legal but risky. CZ obviously knew this, legitimately publishing that he was selling his large holding, collapsing the value and causing a collapse in collateral for FTX, bringing them down.

Skip forward 24 hours, it’s now Thursday. Binance, having commenced talks with FTX about a bailout/acquisition, pulled out of the deal. What they had to say was not reassuring. The hole left behind here is alleged to be some $6 – $10 billion.

The concession of defeat came on Friday morning.

People will say the industry is crazy and needs more regulation. I say no. This is actually capitalism. Somebody did something very risky. SBF, a billionaire with a loud mouth and a high profile, has been margin-called by a bigger billionaire with a quieter mouth and apparently larger brain. By most calculations SBF was worth more than $20 billion on Monday, and less than $1 billion today, returning to the lowly ranks or mere millionaires.

It would be sad, but this image from last year remains imprinted on my brain and I simply cannot help but think that if you lie down with dogs… 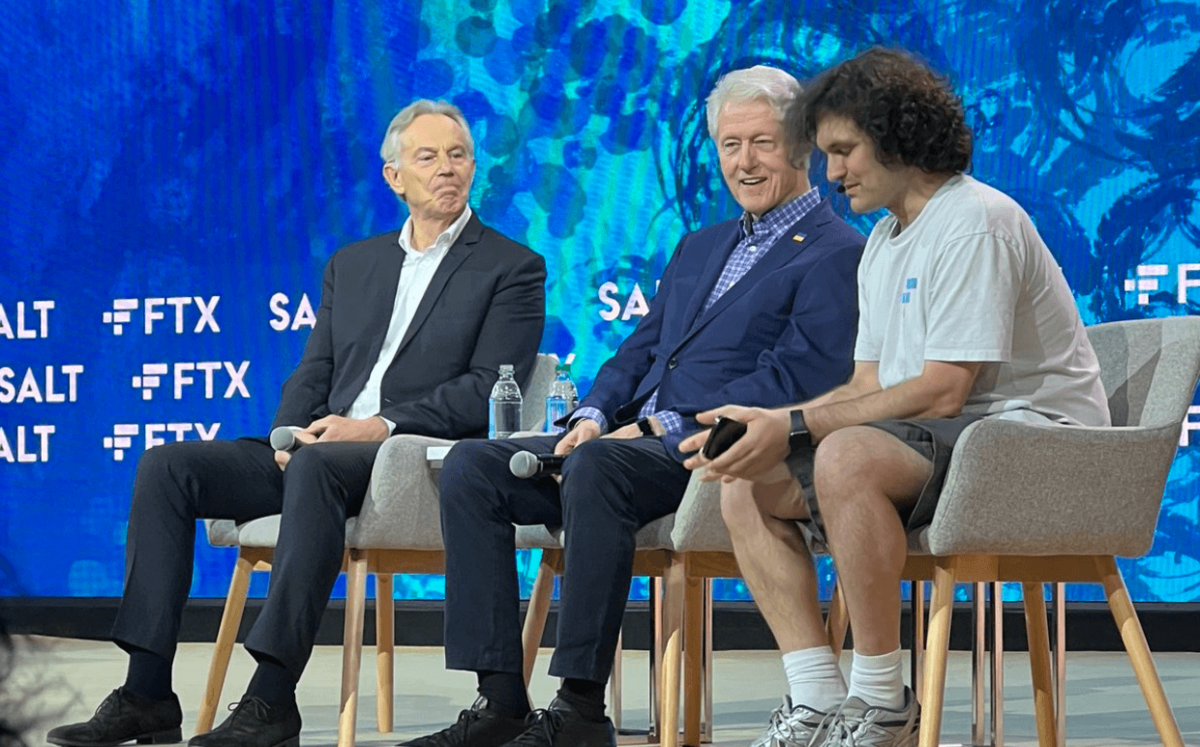 It simply would not be possible to make this up. The location for this year’s COP27 Conference is … the Lamborghini International Convention Centre. I do hope they are providing a shuttle service from the private jet terminal for participants.

It gets even better. Brilliantly, the conference is sponsored by Coca-Cola who in 2021 were awarded Top Plastic Polluter globally. Coca-Cola is also notorious for their role as the world’s number one diabetes broker, a coveted title which enables a human death every 6 seconds. A level of achievement unsurpassed by any weapon yet designed. All attendees are assured they can look forward to consuming microplastics and slowly dying while sipping mixers in the evening.

It goes on however, with all manner of eye-catching goodies on the COP27 website, not least instructions for those wishing to protest.

If you are planning on protesting, I will take this opportunity to urge you please to wear your conference badge and conclude your protest by 5pm in time for canapes. Anyone made starving or destitute by the decisions we made at the last conference will not be approved for protest and will be shot.

Seriously though, I’m pleased to be able to announce that I will be attending this year and have selected the following sessions which I will report back on next week. Please don’t worry about the apparent time clash, these sessions are on different days allowing me time to refuel my private jet which runs on the crushed bones of poor people.

Did I mention bitcoin is bad for the environment?

Since Coinbase listed back in March 2021, they have had an awful time. Listed at $340, now standing at $51, it’s an 80% plus decline. Rather predictably the results they announced were not good.

Net revenue has absolutely cratered, down 77% on 9 months ago. Most of that is outside of the top two assets with bitcoin and ethereum only falling 40% and now making up a much larger percentage of the overall Coinbase business.

The two major assets now make up ⅔ of the volume, roughly doubling their share since this time last year.

Generally this is what we expect to see in a declining market. The assets that will survive, surviving and the others heading for zero. Liquidity is absolutely crucial in markets like these and not many digital assets have any.

There were some bright spots in the report though. Notably the arrangement with the world’s largest asset manager BlackRock will help a lot over the long term. Coinbase will be providing the custody and trading services to BlackRock institutional clients and one imagines this will be rolled out to retail over time which is potentially a huge distribution source. Coinbase has also partnered with Google to provide crypto-payments via Coinbase Commerce. This is small at the moment but as blue chip partners go, you can’t really do better.

Most positively, retail volume fell 85% from Q421. Institutional volume now makes up 84% of Coinbase business. Why is that positive? Institutional business is much more resilient and less likely to sell and panic. Bitcoin and Ethereum are moving into very strong hands during this bear market, when retail returns to the fray there won’t be much for sale so let’s hope they do so in a gentle and orderly fashion.

Across the world, all the talk is Central Bank Digital Currency (CBDC). Not many have actually done it though. The only real test case has been Nigeria where the E-Naira has been open to the general public for over a year.

The verdict? Near total failure. According to Bloomberg, only 1 in 200 Nigerians use the eNaira. That’s after the government implemented discounts and other incentives as desperate measures to increase adoption. The E-Naira has become a symbol of monetary corruption which has done so much damage in the country. 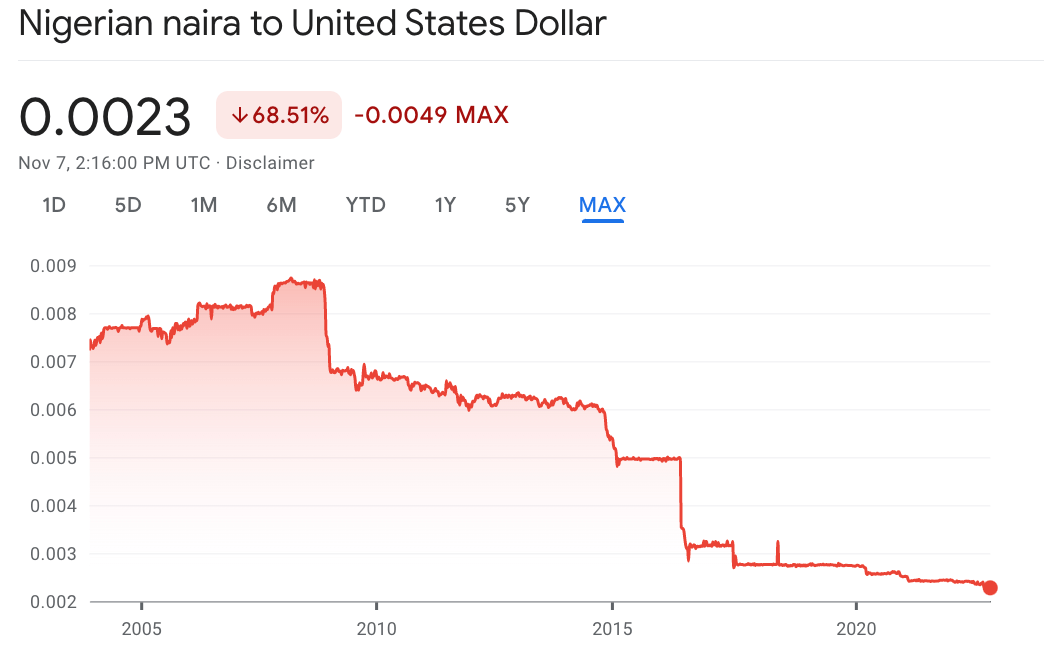 The Naira has lost 75% of its value against the USD since 2005 and continues to fall. Simply the supply of the currency is totally corrupted by printing and fraud. That is one of the reasons bitcoin is so popular in Nigeria where 10% of the population own some, higher than most countries across the world.

A CBDC does not fix this fundamental problem, it is simply a digital walled garden of the same thing but makes it even more difficult to escape. It is a matter of years now before transactions converting CBDCs to non-state approved digital assets will likely be banned.

If you don’t understand central bank digital currencies, think of them like this. Cash in your hand is freedom money. You can do anything with it and it is completely private. Cash in bank accounts is like regulated money, you can pretty much do anything with it, provided the bank approves and you aren’t sending it to Iran or spending it in what is deemed to be a ‘suspicious’ way. A CBDC will become a prison for your money, you can spend it on certain things, at certain times depending on your behaviour in other areas (social credit scores etc.)

The fundamentally exciting thing for me is that government money is getting worse. The competition for value exchange is real. People want the easiest, fastest and most reliable medium through which to exchange their own time. They are rejecting digital forms of government money because they are not as good as the open source alternatives. It’s not even close. In Nigeria more than 10% of the population own bitcoin even though it is volatile while only 0.5% want to engage with the government’s CBDC which is being offered at a discount, and advertised widely using tax-payer funds.

There will be no “dovish pivot” from the ECB, say officials. Even if it causes a massive recession, which of course it will.

Perhaps more importantly the ECB will next month discuss how to start shrinking its €5 trillion bond portfolio. Obviously there’s lots of cash sloshing around in everyone’s kitties to start buying corporate bonds from the ECB as they enter recession.

For her part Lagarde is in agreement saying

a mild recession in the eurozone would not be enough to “tame inflation” on its own. A recession was not yet her baseline scenario for the 19-country bloc, she said, but if it happened it would not be sufficient for the ECB to “just let it roll out” to bring inflation down to its 2 per cent target.

I find it odd really. A mild recession is not enough. We need a really really big destruction of economic capability to achieve our objective.

The fact is the 2% target is pretend. It’s just made up by somebody somewhere and we all accept it. We then allow completely unelected officials to pursue it at massive cost to people having watched them fail for decades now. It’s a total circus and we hang on their every word, including me.