We are still waiting for the Executive Order from Biden on cryptocurrency. He is likely to instruct various agencies in the US to find an appropriate regulatory backdrop against which the sector can operate. Likely it won’t be good for those not strictly following securities law.

There is much more encouraging news elsewhere though.

In India, the holding of cryptocurrency has been potentially legalised (via draft legislation). After many bans and reversals, it seems like India is going to move forward with this technology. Indeed, their proposed 30% tax on digital asset gains is an encouraging sign, since it accepts those gains as legitimate and taxable.
Russia also did an about face this week. After the central bank called for a total ban, the Finance Ministry took a more pragmatic approach. Once again, the appeal of tax revenues is too much to ignore.

Whatever the US ultimately proposes, they will be mindful of being left behind. With the loss of their massive semi-conductor advantage fresh in their minds, will they really allow India and Russia to create a tactical advantage in commercialised cryptography? I don’t think so. Hopefully the next few weeks will tell us something. America can’t afford to frighten off growing industries.

Americans might ask; how are we falling behind India in our legislative development of this technology? On the sub-continent they are galloping along on all fronts; fast internet, public infrastructure, digital education…….. meanwhile, Rome burns.

The de-platforming debate is heating up again thanks to podcaster Joe Rogan, who hosts his show on Spotify. If you have never listened to it, it is fairly innocuous with long form conversations lasting up to three hours. Over the course of such a period you can be sure that nearly every guest will utter something controversial (or stupid) that will upset someone, somewhere.

The success of his show is unarguable though, he massively outperforms nearly every US media channel. 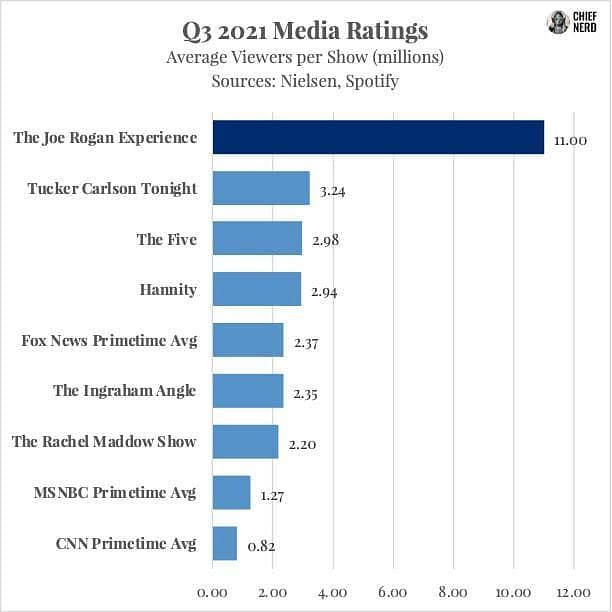 Spotify now find themselves under pressure because many artists on the platform are removing their music because they object to what they see as misinformation being purveyed on the Rogan show. They may have a point and the attempt to have him cancelled is well under way.

Why do we care? We don’t really. Other than to make the point that participation in the economy, as it is currently constructed, seems to exist at the whim of others. You can have your bank accounts closed, your business banned from the internet and your travel plans cancelled.

That is the purpose of decentralised, open-source systems. They are open to everyone and via cryptography you can outright control your own assets and that cannot be taken away from you. It is a profound step forward for property rights, which matter a lot. Increasingly there is a risk that if you think or say or do the wrong thing, then the consequences can be enormous, rightly or wrongly. In effect, you can be excluded from the economy.

This use case for digital assets isn’t given enough credit. Who else is really working towards the enhancement of property rights? It seems to me most governments around the world are working to remove them.

Consider inflation. It is a direct attack on your property rights, you have absolutely no control over the number of currency units in existence in your country. While those units increased enormously over the last three years, your property has been debased, effectively taken from you. It is remarkable that people rarely forget to lock their front door at night but don’t even blink when the government tells them their inflation target is 2%.

Still, this kind of activity builds out the case for decentralised platforms. Property rights are the foundation of modern economies, the more they are eroded the slower growth goes. There aren’t many things you can outright own and control yourself, it is massively powerful technology, and the government knows it. It is possibly one of the few areas where governments are in front of populations in their tactical thinking, mostly because they have had access to cryptography for a lot longer than everyone else. 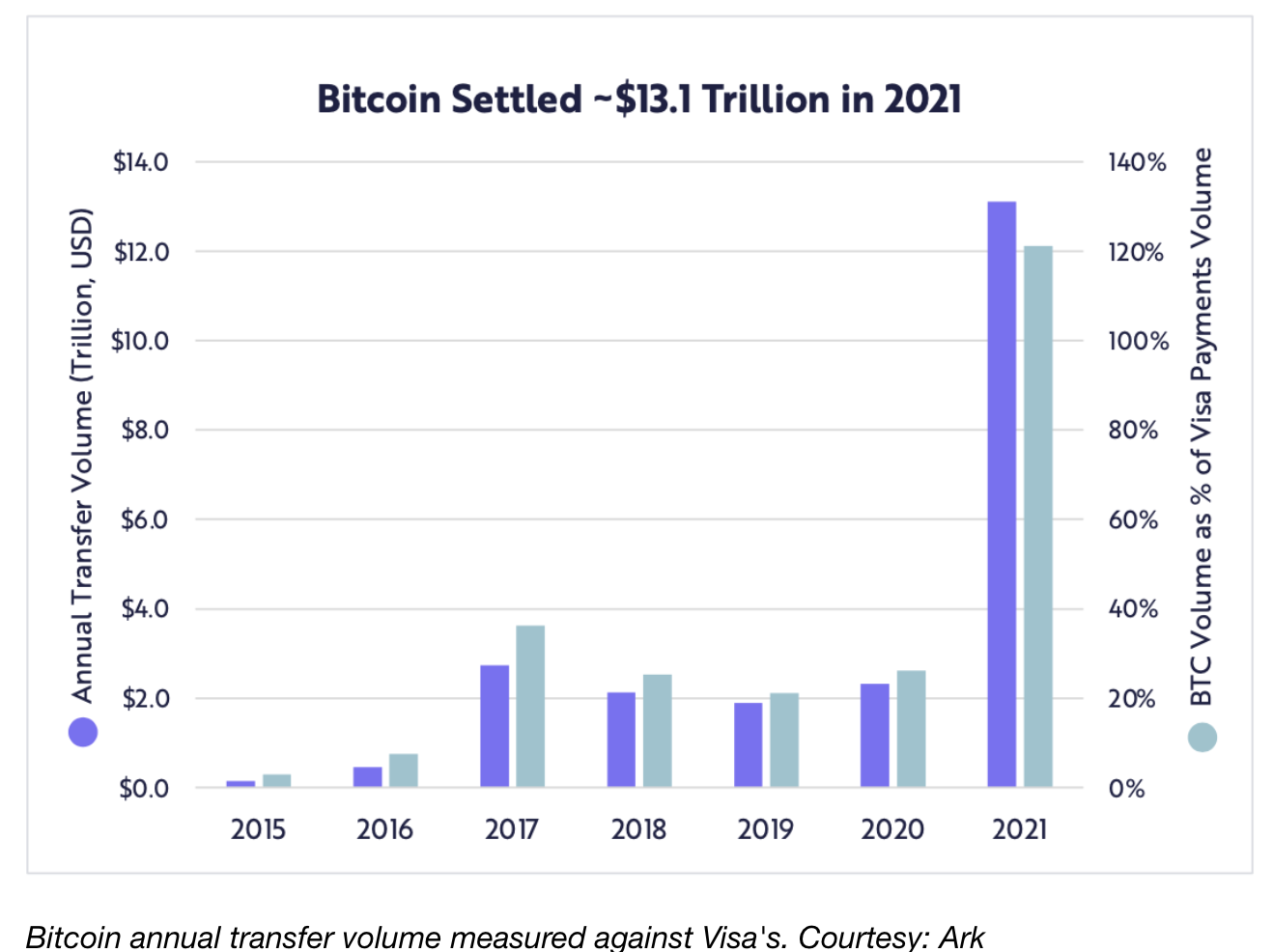 For the first time, bitcoin’s annual settled value exceeded that of Visa. In 2021, over $12 trillion was settled on the network. There are significant differences though, Visa being vastly more used for smaller items and day to day transactions, bitcoin for much higher value settlements.

Nonetheless, the numbers are on the bitcoin blockchain, they are provable and they exceed Visa, American Express and every other major credit card.

We might ask why that is and the answer is rather simple. Bitcoin is cheap, secure and convenient taking only 0.01% of the settlement value in fees against 0.22% for Visa. A 20-fold difference in price. 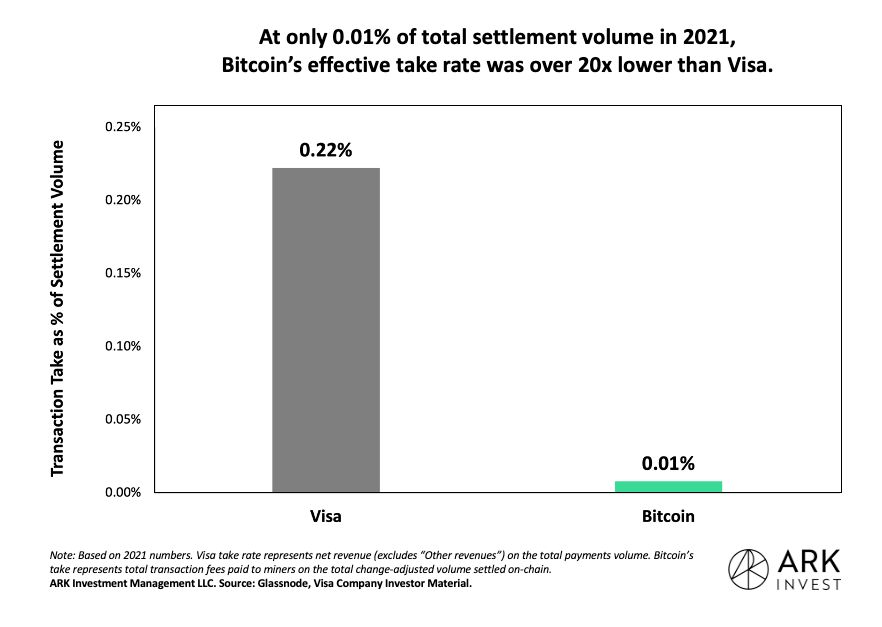 The promoted consensus as far as bitcoin is concerned remains that “nobody uses it”. Here’s an extract from an article on Livewire this week.

That bitcoin isn’t used just is not true. It is now widely used across the world and that usage is growing very quickly. Particularly in poorer countries with weaker currencies.

What’s more, stablecoins are approaching $200 billion in circulation which if it were a currency unit would be the 35th largest in the world, ranking alongside the Danish Krone and the New Zealand dollar. Bitcoin itself ranks 14th, in front of the Russian ruble and slightly behind the Swiss Franc.

In a blog post on its official website, the Ethereum Foundation announced its decision to change the name of the upcoming upgrade from ETH 2.0 to the “consensus layer”.

The underlying reasons for this are good but this sort of nomenclature shuffling reminds me of corporate life. I recall some years ago after an expensive administrative error someone told me:

“It’s not a mistake, it’s just that the way we do it now is improved, it’s better”.

Make sense? Not really. The prospects for developers resolving this in 2022 are not good given that the roadmap continually changes. I don’t doubt the sincerity or the talent of the developers that work on ETH but when you consider the resilience testing that goes into banking infrastructure, this kind of thing wouldn’t get past first base.

The semantic shuffle here is;
“Better reflects the engineering effort and protects people from ETH 2.0 related scams”.
The non-shuffled alternative might be;
“we have completely changed our roadmap, again. Changing blockchains while they are moving is very hard indeed; it’s an oxymoron really but we are doing our best”
The fund continues to hold a position in Ethereum but its size reflects our doubts about the planned changes. We set these concerns out in long form last year. You can read about them here. 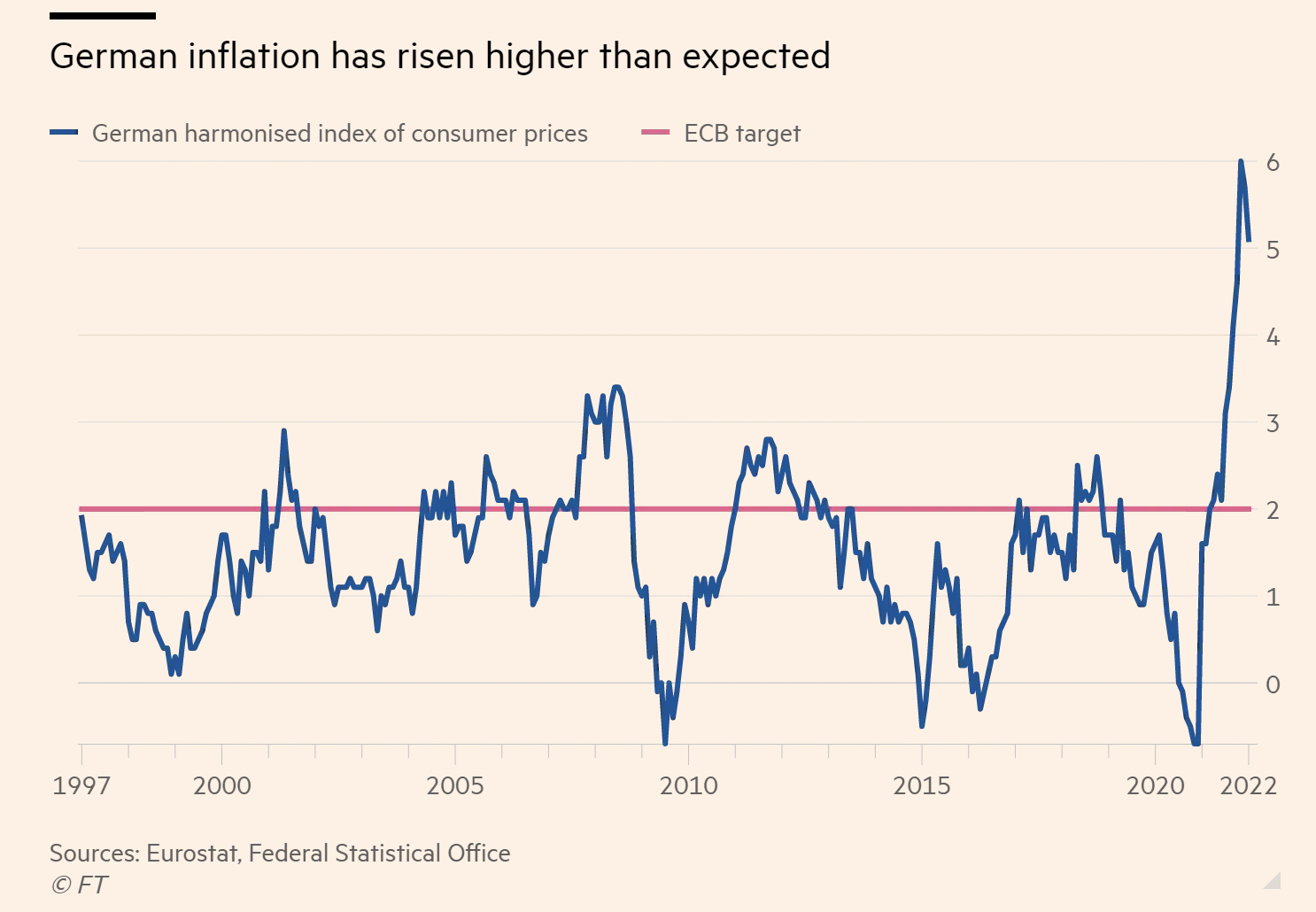 Not exactly a trivial increase either, coming in just over 5%. In Spain it is over 6% and in Italy nobody cares anymore, so it’s probably a lot.

It looks likely that the ECB will now revise upward their inflation expectations this week when they meet. It would be hard not to after all. Agent Lagarde has changed her tune a little too. Here she is channelling the “whatever it takes” speech of her predecessor Mario Drahgi.

The thing is, it’s a game. The ECB want inflation higher for longer before it seeps into people’s expectations. So, I suggest she will talk a big game now for months but actually do very little. It erodes the gigantic debts accumulated over the last few years and kicks the can down the road a little. What’s more, she doesn’t really want a Greek style crisis in Italy or Spain from spiking rates.

In the nearer term the German’s remain terrified of inflation, mostly because they are the only ones in Europe who remember the damage it can do. The pressure will build and build but you won’t see too many interest rate rises until the French President is safely re-elected in April. For sure Lagarde will look after her friends in France first and everyone else in Europe can wait in line. You might recall this headline from late last year. 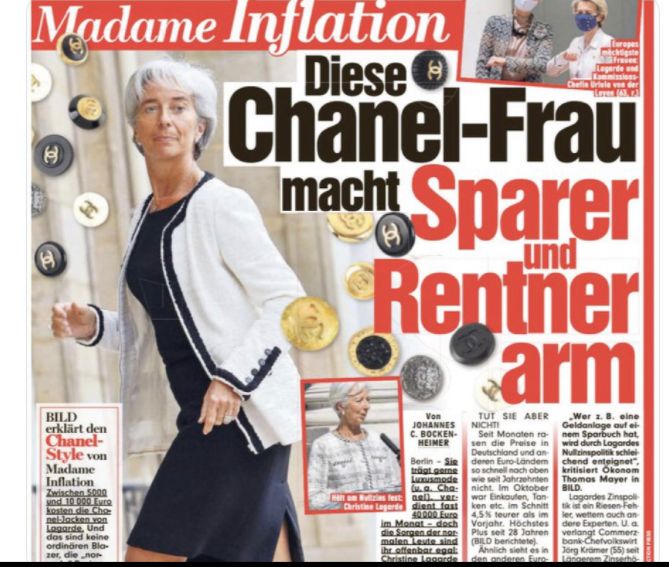 You have to love European politics, it’s so much more fun than stories about Barnaby Joyce’s love children.