How to lose $1 billion in one afternoon 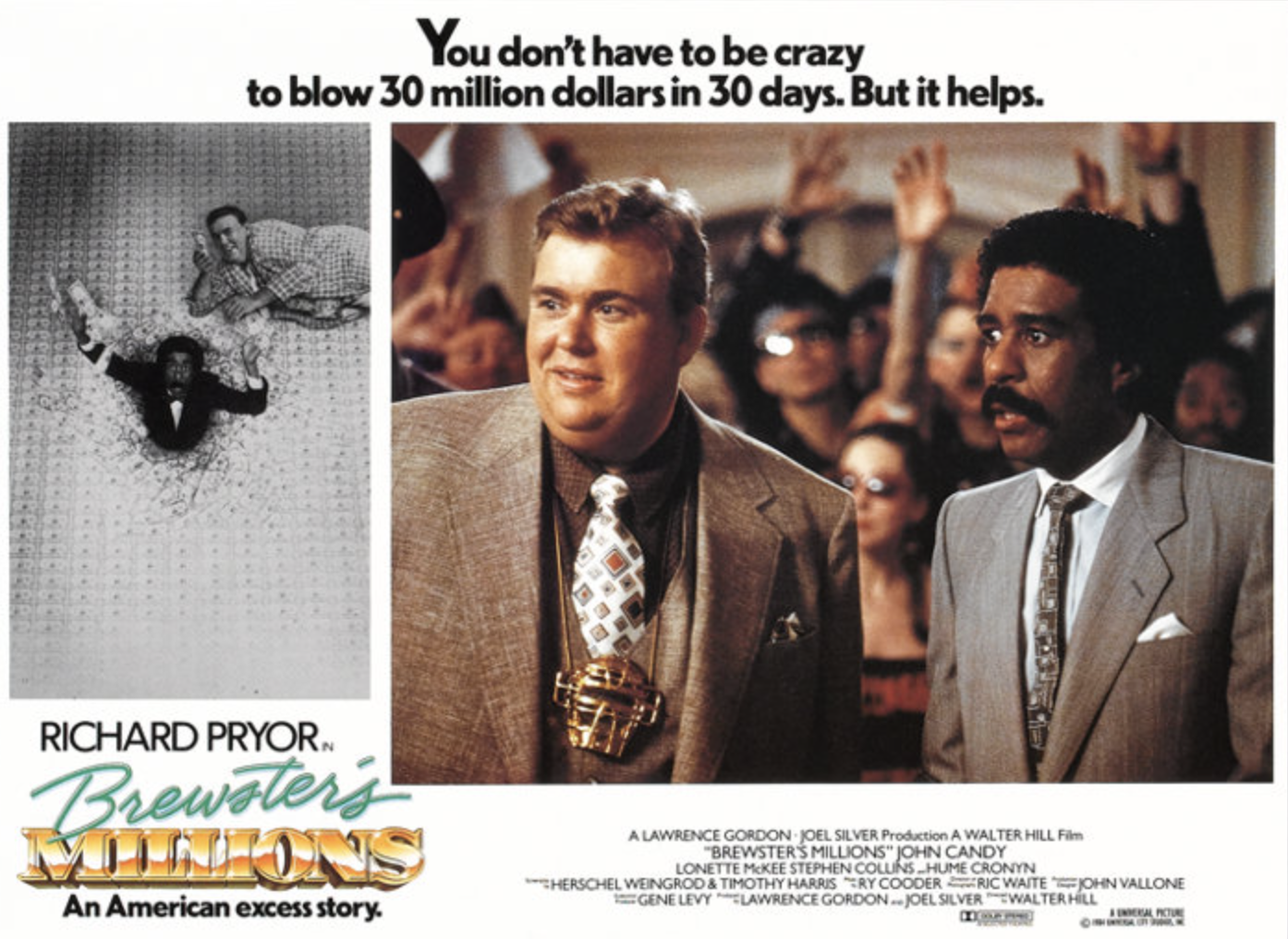 Brewster’s Millions was a fun film from the mid 80’s. The premise was that Brewster must spend $30 million in 30 days in order to inherit $300 million. The rules of the game were: not allowed to own any assets, destroy the money, gift it, give it to charity or tell anyone about the deal.
He is ultimately successful but it is not a simple matter.

These days of course, it’s much easier to destroy value, as we witnessed on Saturday when $1.2 billion of long positions in cryptocurrency were liquidated in about 30 minutes. Following the pull back from the highs of a month ago, confidence was returning to the market and traders were taking out leveraged long positions. Below them though was clear air and with enough selling it was clear to some in the market they would be wiped out.The opportunity presented itself, and while America slept, they were indeed wiped out.

Sadly, for those involved, they will not now inherit $300 million and their cryptocurrency sits with professional traders and institutions who understand thin liquidity better than most. Leverage and volatile assets are a dangerous mix.

Many will point to the move as evidence of manipulation but I must disagree. Digital assets trade 24 hours per day, 7 days a week. As time goes on fewer and fewer people will use leverage in these markets because they will learn the harsh lessons the market has taught them. Contrast that with the US stock exchange, retail purchasing of stock options is at record highs. If anything bad happens the stock market circuit breakers kick in and the market closes altogether. Circuit breakers kick in at -7%, -13% and -20%. That is not a real market in my view, that is manipulation. Downside risk is simply not tolerated in traditional markets and that is wrong.

That “protection” drives excess risk. This year stock options volume have started to exceed share volumes. This means more money is in leveraged plays than simply buying the underlying asset. 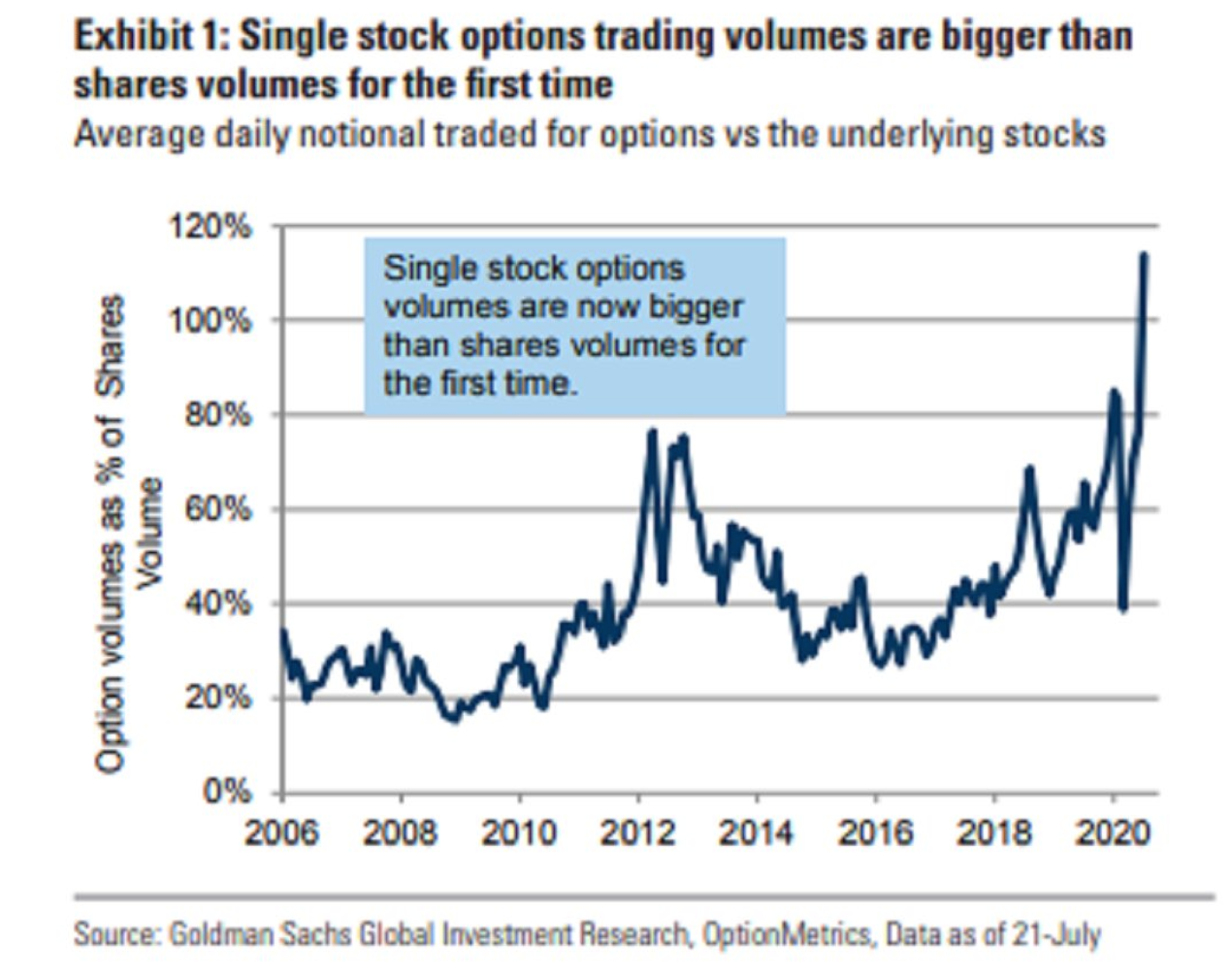 There are so many enjoyable alternatives if you wish to pursue the worthy goal of setting fire to a billion dollars or more. They include buying an English Premier League football team, sinking an uninsured super yacht, and if you live in Sydney, you could build a tram line through the city that nobody uses.

The weekend was also a nice reminder of why the first test any asset must pass to qualify for our Managed Fund is liquidity. The key question: is there any?

A good example has been provided this year by SushiSwap, a DeFi asset we have followed closely but did not buy because of liquidity concerns. 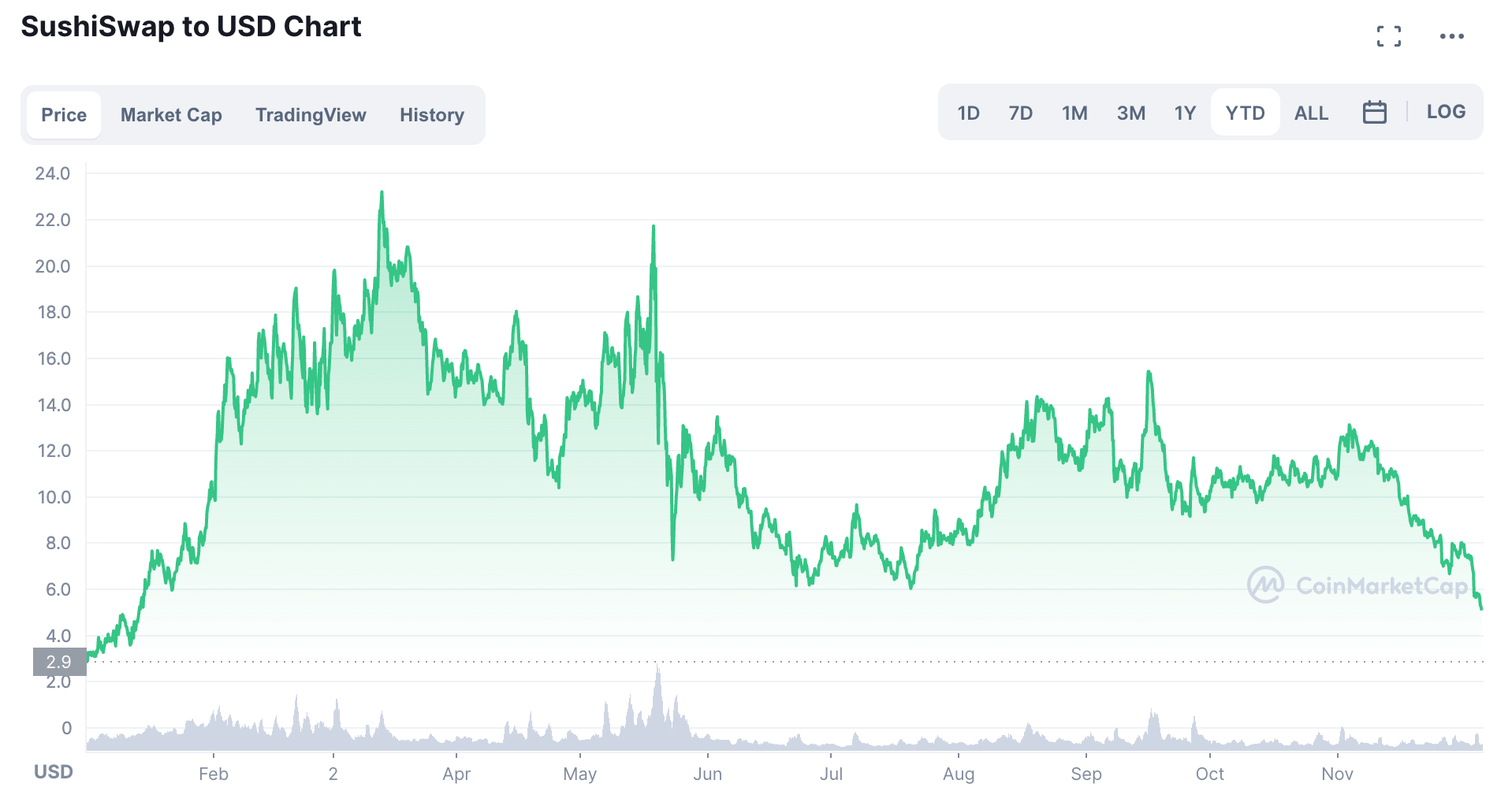 In March this year, DeFi was really starting to take-off. Tokens like Sushi, which is essentially a software program for leveraged borrowing and lending in cryptocurrency, were riding high.

Whatever their ultimate prospects, many DeFi tokens are vulnerable to cascading liquidations like the one we saw on the weekend. As people withdraw from the protocols, they become unbalanced and as the price of collateral falls, more and more liquidations ensue. To be fair to most of these platforms, they execute very well under extreme selling pressure like we saw on Saturday. The software just does what it is told.

The incentive structures in some DeFi assets are perverse too, with many being highly skewed to early adoption. As time passes, it becomes less and less attractive, which generates an almost reverse network effect as newer and more generous alternatives emerge.

We’re keeping an open mind about this as a fund, and there is a strong case why decentralised trading via software should be able to provide much more efficient outcomes long term. Our entry test will remain though.

When sentiment turns; can we sell it at scale and at the market price?

Quick snapshot of real US interest rates for you across the various yield curves (note US date format in the table mm/dd/yy). There is nothing new here other than perhaps in the short term, even a rise in interest rates of 100bps, would still leave real yields negative.

The market seems to believe there will be a couple of rate rises in the US next year, but they will likely be 25 bps each if they happen at all. So, depending on inflation, it looks negative all the way through 2022.

Looking 30 years out, can it actually make sense that an economic actor would effectively be paid to borrow USD for 30 years? The situation is complicated by QE and interventions and lots of really clever people know all sorts of things we don’t, but a simple person might conclude:

“The outlook for the US dollar is so bad over 30 years that people are willing to pay me to take them off their hands.”
People are taking up this offer in record numbers (see Afterpay et al.), some are buying junk, some are buying scarcity, not everyone will win.
Couldn’t be that simple though, could it?

Most people interested in NFTs make their first stop at opensea.io. Once there, you can buy yourself a “Crypto-Punk” for $250,000+ if you think it’s worth it, along with plenty of other lower priced options.

This little heard of website is now making an absolute fortune. Note the words of their new CFO this week (who left Lyft to join them). 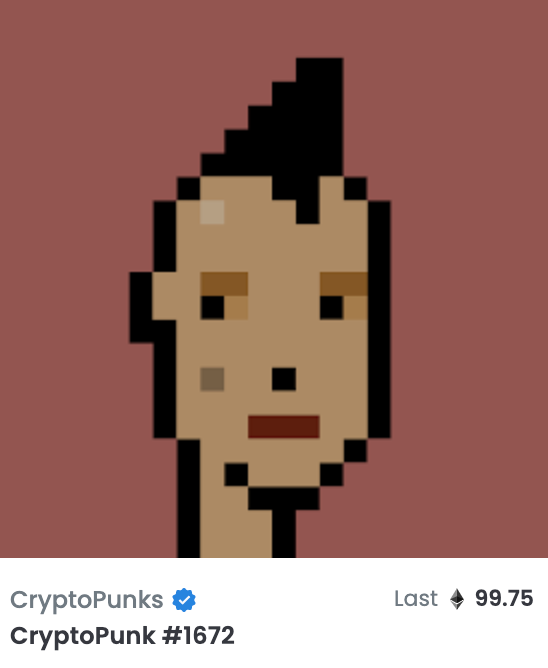 In theory, there is no limit to the digital assets OpenSea could choose to sell in future, including traditional equities (which are digital claims anyway).

In the digital world, the limit is only your imagination.

More trouble in paradise this week as the European Union formally shelved its plans for a EU wide digital tax, in the first public admission that it is dead.
“No time frame exists for the digital tax’s publication, meaning it has effectively been killed”, according to a senior member of EU tax commissioner Paolo Gentiloni’s staff.

Recall that EU countries raised €750 billion during the pandemic via its ‘Corona Bonds’ to help member countries through. It was the first time ever that the institution had issued its own bonds, jointly guaranteed by all all member countries. The EU indicated at the time that the digital tax would be one of the methods of repayment by charging a 0.3% tax on all internet sales (via mostly US companies). Under pressure from the US, they have given up on that plan and now they need to find some other way to pay creditors.This is not as easy as it sounds, since the EU does not have pan-European tax raising powers. We await their update on new collection measures.

Meanwhile, over the road at the European Central Bank our favourite central banker has been busy reassuring everyone that inflation is a “hump”. It will go up and then it goes down. 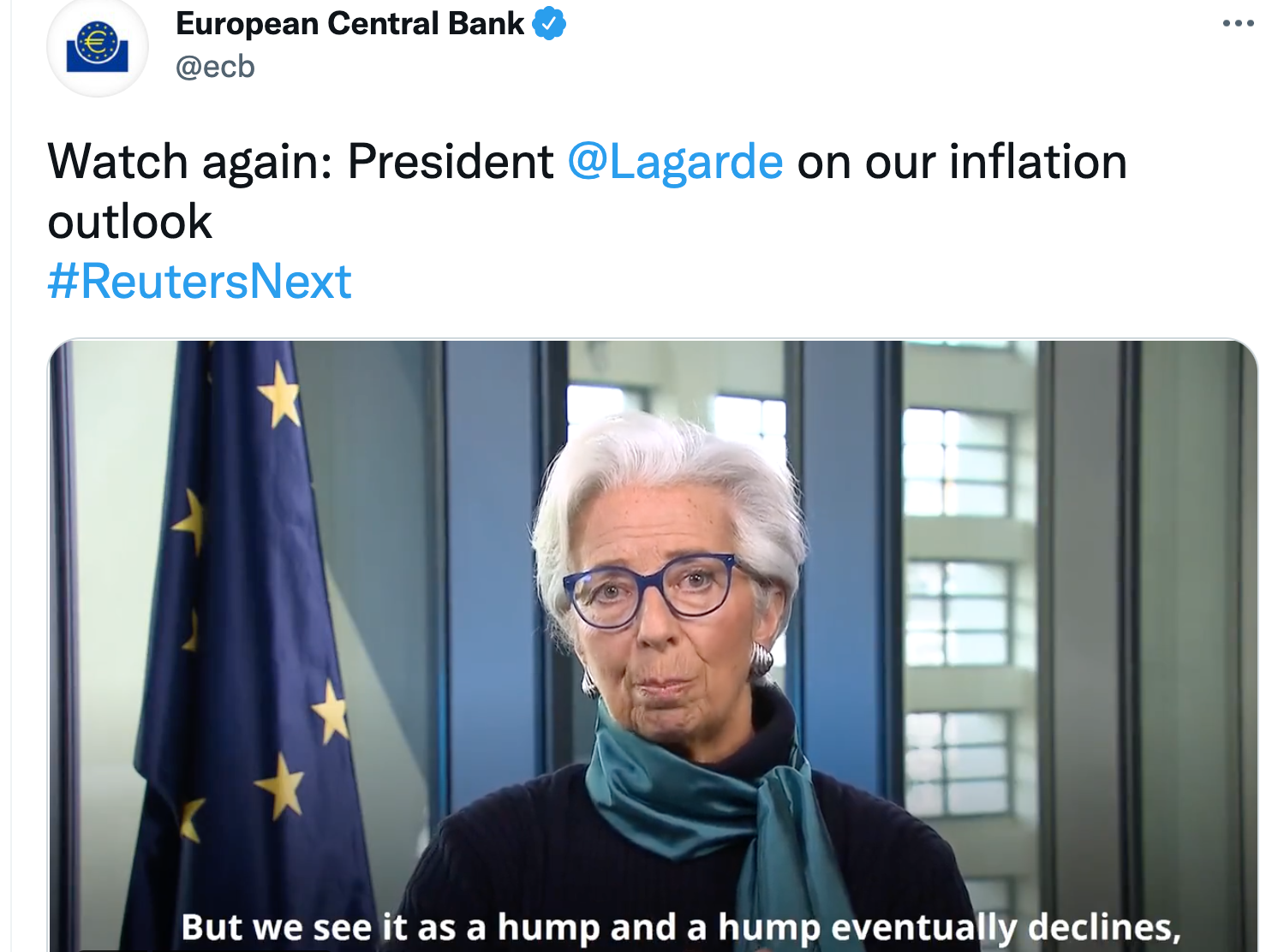 This is one of the reasons I do not like Lagarde, she is an excellent presenter and highly believable, but she is in essence presenting a falsehood. Inflation is a rate, price levels are an absolute, so even if her hump story is true and it likely will be, the absolute price level will be substantially higher and on the other side of the hump and most people will be poorer as a result. 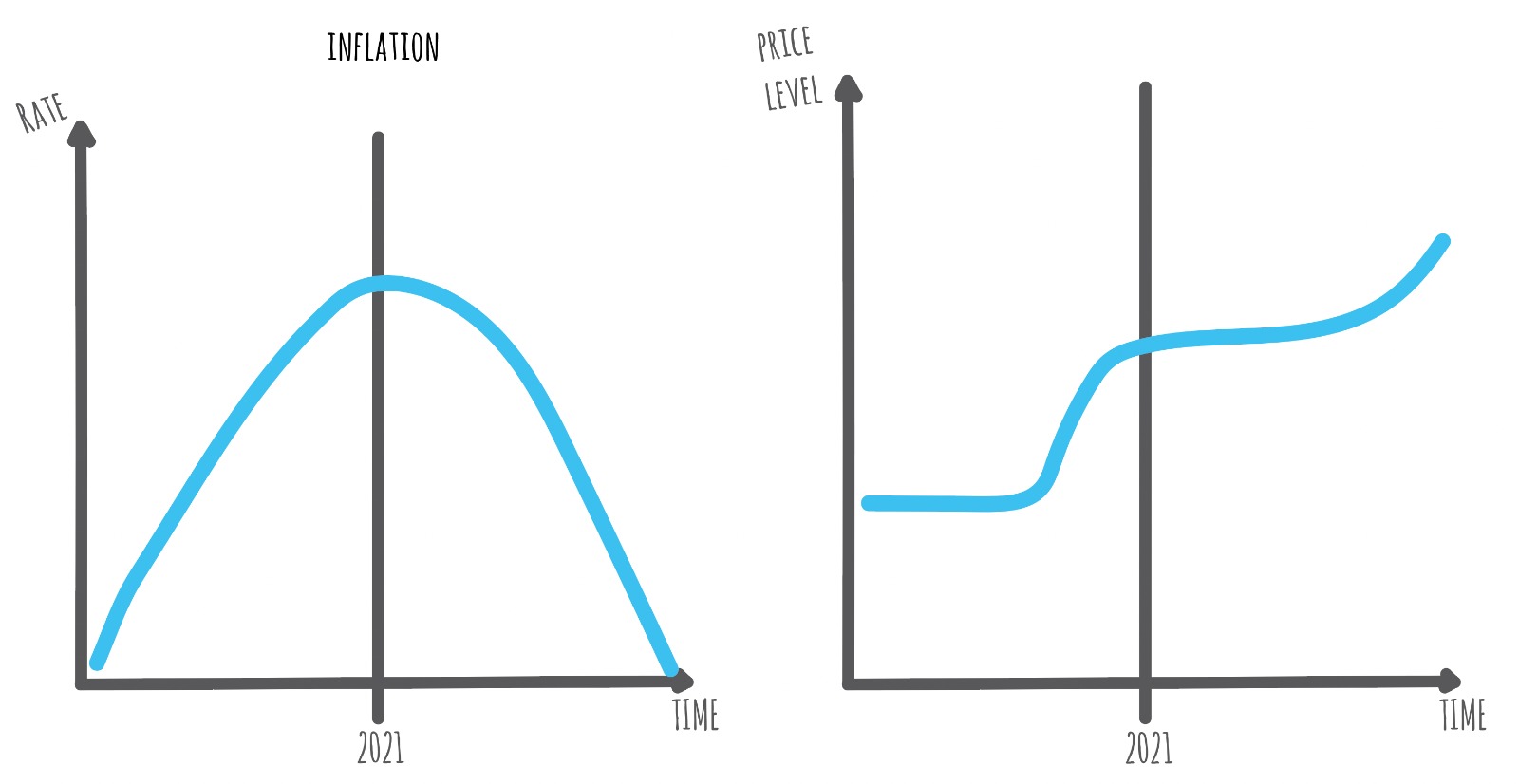 In 2022 though, she will claim triumph for something that will be an abject failure and complete dereliction of her sole duty, which is to keep prices stable.