“Bitcoin, briefly the world’s favourite cryptocurrency, is in trouble. It plummeted from a peak of around $33 per unit in June to just $2.51.”

Quite the fall it was too, 95% in four months. Still, it didn’t die, blocks kept coming, the monetary policy stayed exactly the same as it always was and always will be. Back in 2011 at $2.51, not many people wanted to buy and even fewer wanted to understand.

As with most emergent ideas, first it’s only for the crazy people, then for the enlightened or lucky, then greed enters. Greed finds a way to lose. Eventually, everybody enters. Happily, you get to choose the price at which you play.

That’s James Carville, Bill Clinton’s political advisor. During the period From October 1993 to November 1994 US 10-year yields climbed from 5.2% to just over 8.0% and the Clinton administration was terrified. To be fair to Clinton he worked hard to reduce the deficit at the time and his efforts paid off, yields fell back to 4%. He’d been given his orders by the bond market and sensibly, he followed them.

The situation is not dissimilar to the UK, where an insane budget caused huge alarm in the bond market and cost both the British Chancellor and the Prime Minister their jobs. 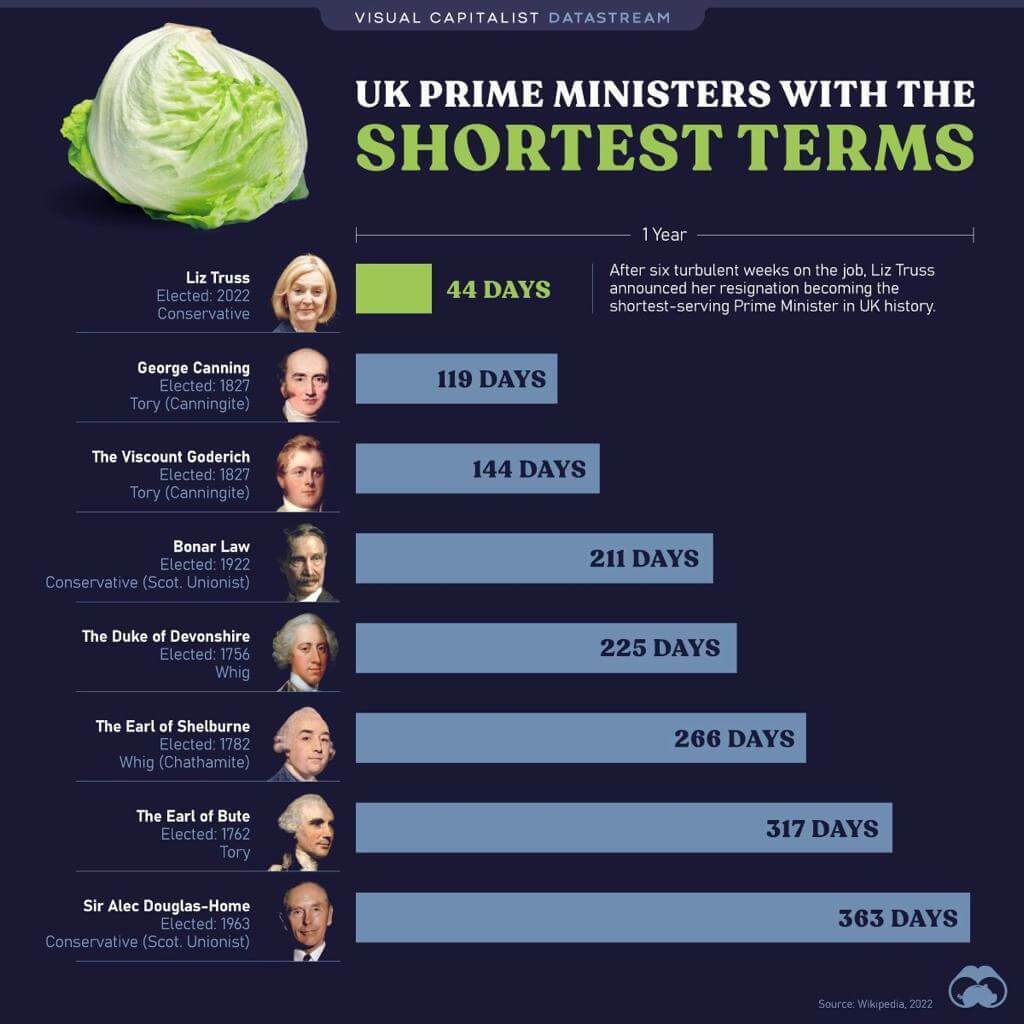 So, Liz Truss becomes the shortest ever serving British Prime Minister, ignominy indeed. Served up with toppings by the global bond market. The more indebted governments become, the more in hock to their paymasters they also become so I don’t expect her to be the last casualty.

Incidentally, the lettuce in the top left corner of the image is a reference to a British tabloid which purchased a lettuce a week ago and suggested she would not survive as long as it did. They were right and were then merciless in their enjoyment of her demise. 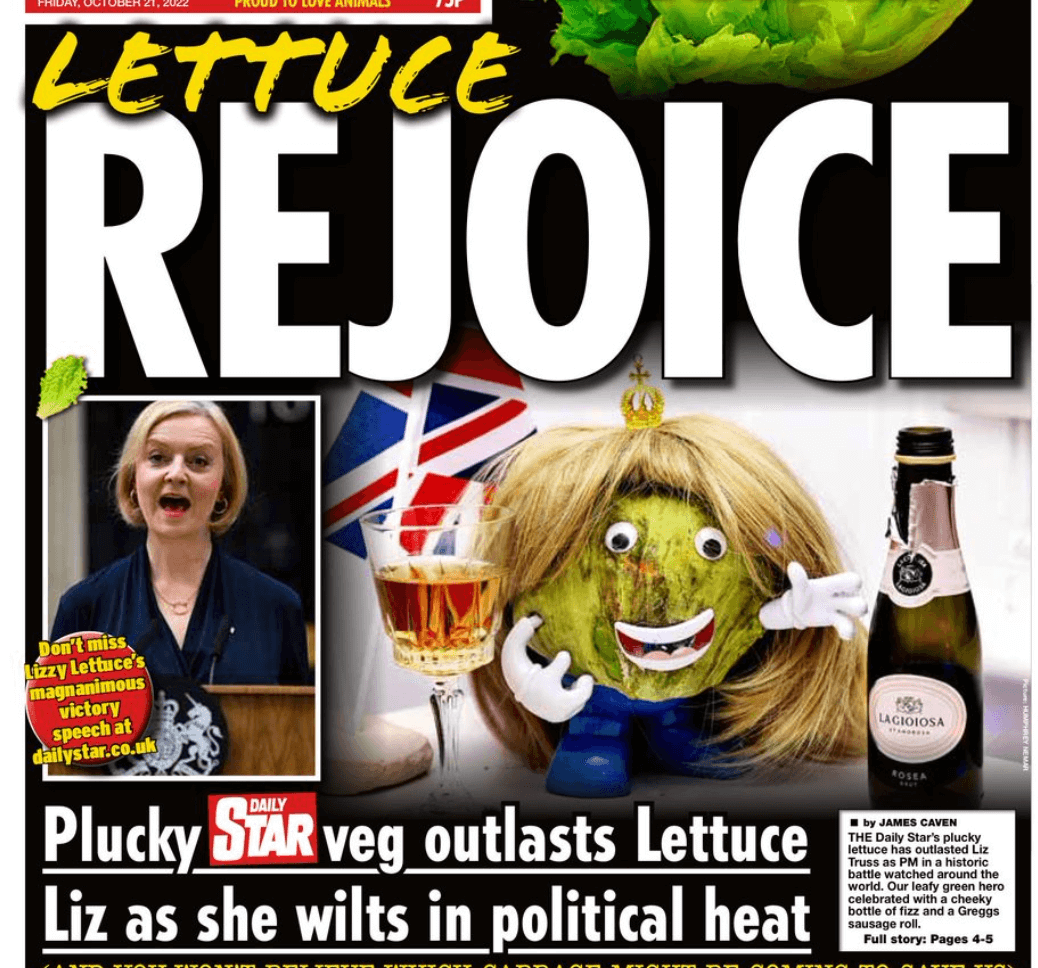 It’s hard not to have some sympathy for Truss, she didn’t really have a chance to get going and she won’t get another.

As we discussed a couple of weeks ago, the KYC induced hacking continues. This time though it was rather worse. Nobody is that worried about details of their Optus account leaking; people will be much more concerned about medical histories, and they should be. The consequences for life insurance and other safety nets are profound.

Once again the focus is on “how this happened” and “what data leaked”. Of course it’s all irrelevant, everything already leaked anyway when you were forced to send them your passport and proof of address, Medicare details and health history over email five years ago. Your data was sprayed across multiple email servers on its way to the provider, in this case Medibank.

The hacker shared a sample of 100 policies for verification. This information contained (no prizes for guessing) names, addresses, dates of birth, Medicare numbers, phone numbers and medical claims data – including information about diagnoses, procedures and the location of medical services. They then emailed threats to Medibank:

“We offer to start negotiations in another case we will start realizing our ideas like 1. Selling your Database to third parties 2. But before this we will take 1k most media persons from your database (criteria is: most followers, politicians, actors, bloggers, LGBT activists, drug addictive people, etc) Also we’ve found people with very interesting diagnoses. And we’ll email them their information.”

It’s disturbing stuff and we have got to do a better job of protecting data and identities. The immediate solution of “improving security protocols” just is not going to work. Privacy works best if it is in the hands of individuals. The longer we force people to share every detail about themself for even minor transactions the worse this will get.

The release of medical data will hopefully cause a major backlash and we can simply start refusing to share details with corporate entities that are rightly considered a private matter. What will it take for a change of course in the KYC gulag? Perhaps the economic weaponisation of medical data might do it.

What we should be doing is this:

Japan this week proposed an economic stimulus package totalling $450 billion. Full details are due to be released later this month, the idea is that the spending will shore up the new government and assist consumers struggling with rising prices.

It all comes hot on the heels of the recent $50 billion intervention in the foreign exchange market. The Bank of Japan is spending furiously to shore up the currency, its falling value is not helping the inflation issue either. 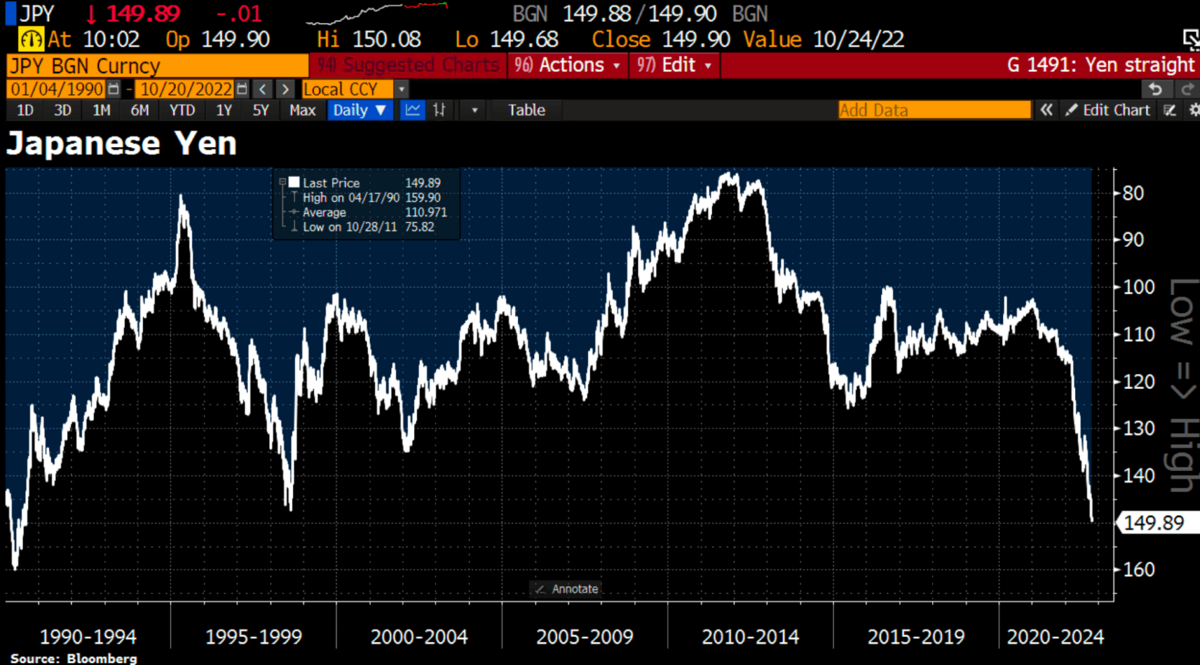 The Yen collapse is extremely serious, 40% down this year taking us back to 1990 levels, exactly the time when the Japanese property bubble was bursting.

Options are few in Japan:

1. They can borrow more and distribute it but Japan is the second most indebted country in the world and the company it keeps on the list is hardly spectacular. 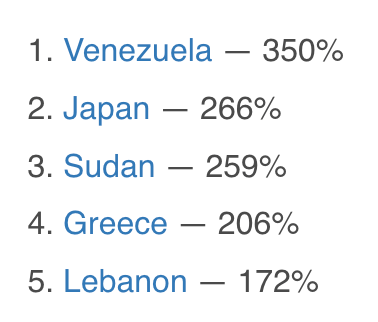 2. Increase interest rates dramatically. Unfortunately, their indebtedness means they cannot do that. The bond market would likely collapse under the weight of refinancing. Japan knows this hence direct interventions in the FX market rather than interest rate action.

3. They can sacrifice the Yen and simply let the currency depreciate completely, allowing for overseas earnings (which Japan has a lot of) to work off the debt. This would be a massive haircut for Japanese bond holders though.

It’s a horrible slow motion car crash which is caused by a declining population. They simply do not have the people to pay off the debts and they will have no option but to monetise them like everyone else in the top 5 list will eventually.

There are not many places to hide for the Japanese investor. Bonds look toxic, cash looks worse and equities are going to get battered by recession. Property is also a no-no because of population dynamics.

Perhaps a scarce thing, linked to energy, that people will use more of in future? 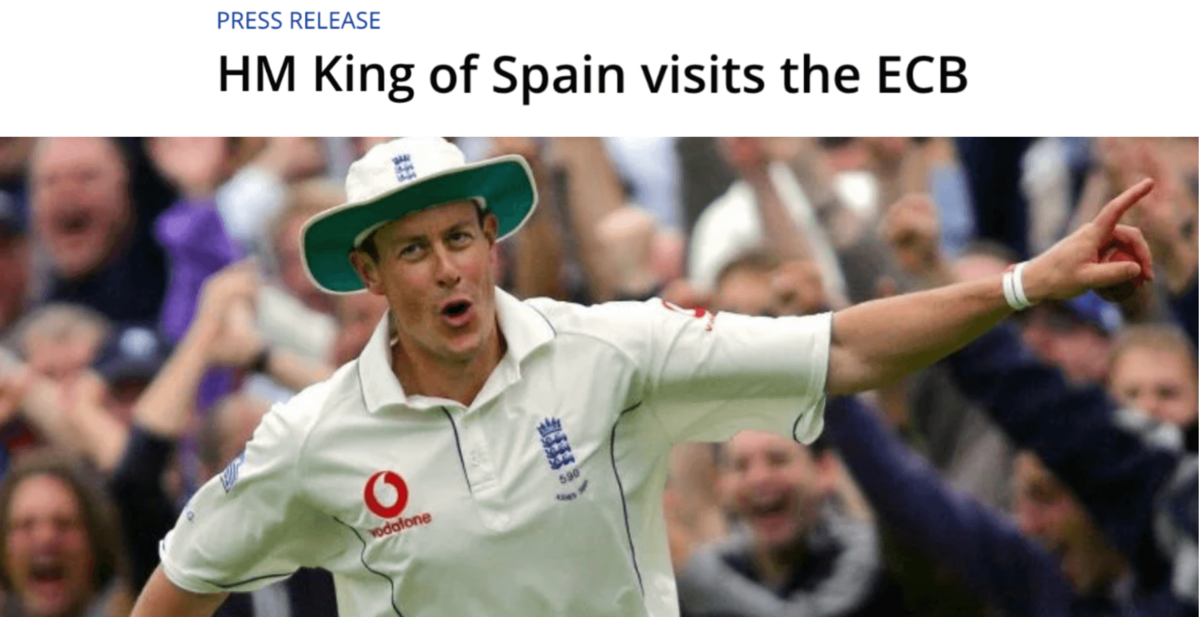 Ashley, while a good cricketer, was never really the King of Spin (there has only ever been one of those), and the universe repaid his hubris by delivering 2000 spelling mistakes. “Ashley Giles: King of Spain”, they declared.

Henceforth, Giles became known to cricket fans as the King of Spain. So embedded did the nickname become that King Juan Carlos himself remarked, “I do not know who this Ashley Giles is but I can assure him that I am the King of Spain.”

It was with excitement then that I assumed Ashley’s visit to the ECB this week was timed with the T20 Cricket World Cup. Alas, the visitor was indeed the King of Spain, King Felipe. A man not known for his offspin.

Lagarde was delighted. No doubt she brought up the 38% youth unemployment rate in Spain which has been elevated ever since she took office. Indeed, since the launch of the Euro, youth unemployment in Spain has gone from 21% to 38% and hardly anyone talks about it. I hope the real King of Spain didn’t miss his opportunity.