Late to the party as usual, this was the only accommodation I could find for the WEF gathering in Davos. A mere 8.6 km hike to the conference and $14,000 per night (including breakfast). Pocket change really because non-politicians (all the major CEO’s) are being charged $250,000 to attend the conference, elected representatives go for free. Cash for access normally results in a jail sentence, not in Davos.

As one does when travelling I checked out the reviews. Josef (Stalin?) considered it exceptional value for money. Presumably he normally holidays on other planets.

Aside from the absolutely excellent food and apres-ski, the main thing accompanying the conference is the WEF Global Risk Report. It’s enough to make you want to just lie down and die, setting a new record for instances of the word ‘collapse’ eclipsing 2016’s total of 70.

A new section has been included this year to motivate the global population called “Global Risks: Tomorrow’s Catastrophes”. It introduces the idea of a “polycrisis”, presumably a derivative of the much loved omni-shambles. A polycrisis is much worse than a crisis but less bad than a catastrophe.

Specifically, a polycrisis is: ‘a cluster of related global risks with compounding effects, such that the overall impact exceeds the sum of each part’.  I look forward to this embedding itself in the political lexicon in the same way ‘Build Back Better’ did.

It’s possible the risks the WEF are calling out actually reflect the fact that governments around the world are simply losing control. Technology is continually identified as a ‘threat’ because of hacking causing the internet to collapse etc. That seems highly unlikely, the internet is actually a very well diversified set of systems, it has been hacked to death already. Every switch, every browser, all of it has back doors. There are daily hacks and outages and yet it is still overwhelmingly a positive thing for the world.

State collapse too is openly discussed and there seems a real likelihood of that happening prior to their forecast doom date of 2030. That is only true because governments are bankrupt. There are so many instances of governments spending way beyond their means. Japan, Italy and Greece in particular look like failed states when you consider their debt burden and horrendous population dynamics. They are doomed but if their systems are bad then they should collapse; why would we pay to sustain them as the WEF suggests?

The narrative control that is so important to governing is being lost in a sea of technology. It’s very obvious and has accelerated since the launch of the internet. 20 years ago someone might ask, “did you see the news”; they would mean the nightly television news that had reported on the latest man bites dog situation and most likely you did see it and had a similar interpretation. Nowadays, nobody under 40 watches “the news”, they don’t even know what “the news” is, preferring their own curated branch of information. That makes it extremely hard to garner mass attention.

The sensationalism in the WEF report attests to this. How do we get people’s attention? Simple, tell them they are going to die imminently and then pop up with a solution that makes you and your friends rich.

I have huge admiration for the WEF and its leaders. They are smart, well-funded and have demonstrated the power of political capture. They make the Italian Mafia look like a bunch of amateurs. Quite how we arrived here where completely unelected people set the agenda for the whole world is testament to the extent of their achievement. They are not to be underestimated but I think they’re creaking at the seams; at least Elon is around to lighten the mood.

A change in mood

A significant change in prices this week. With Bitcoin up well over 20% on the month, we don’t actually see much volume driving the shift and it could well just be short positions covering themselves on slightly better inflation news. One thing has changed though and that is miners are no longer selling bitcoin. 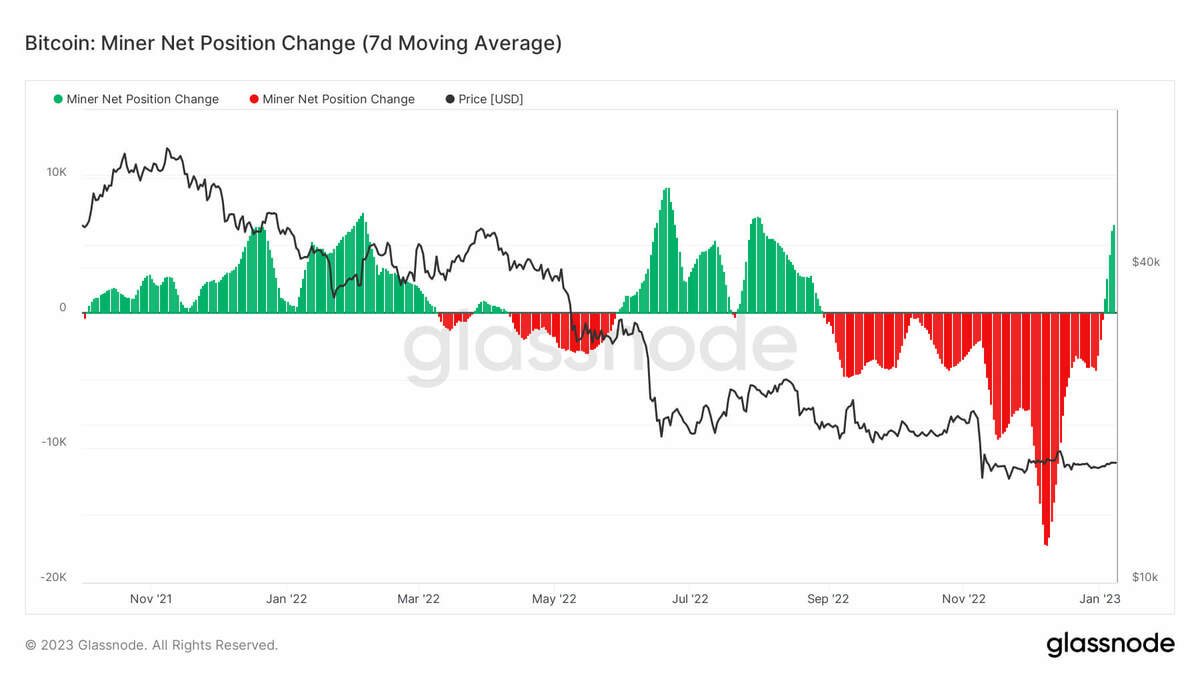 There was a steep capitulation into the end of the year as one of the larger miners Core Scientific filed for bankruptcy.

Bitcoin cycles are generally defined by miner capitulation and this one has been particularly savage with massive losses for the investors in mining companies and huge amounts of equipment being sold off at rock bottom prices. The general mood appears to be that this is simply a bear market rally and normal downward service will resume shortly. However, we are now equidistant from the all time high and the next halving (roughly 440 days from each); if previous cycles are a guide it may well be that we have turned a corner and while the choppy ride will continue it might shortly be choppy up more than choppy down.

Among other irrelevant doodlings of the week I found out that a man called Simon Plouffe has discovered a formula for the nth digit of Pi.

It’s remarkable really given that Pi supposedly has an infinite number of digits. His paper is here.

He seems to have won no mathematics awards and hold no honorary positions, there were also no news articles on google about his discovery. His website could not be simpler, setting out all the things he has discovered over the years.

I’m backing Monsieur Plouffe to have a much greater impact on humanity over time than the many thousands in Switzerland this week. Could he solve the Rieman hypothesis too?

Niche advances in mathematics tend to take a very long time to find practical use. Gauss was aware of the discrete log problem several hundred years ago and basically ignored it even though it was interesting. It now forms the basis of cryptography and bitcoin. It is the incorruptibility of that mathematical proof that will drive out weaker monetary systems over time because one is based in absolute truth, the other is a fraud. That’s just how it is and if you think you have a better argument as to why that won’t happen, as Plouffe has done, prove it!

Against the odds, Ethereum managed to pull off its upgrade to proof-of-stake (POS) last year. Whatever the pitfalls of their consensus mechanism (and there are many) the protocol now moves to the next upgrade known as ‘Shanghai’. It has some interesting features:

Shanghai will finally unlock the ability for those who staked their ETH at the time of the merge to withdraw it. The first instinct here is that there will be a tidal wave of withdrawals and the market will be flooded with liquid ETH that was previously staked. This seems unlikely because only 43,200 ETH per day can be unlocked, a tiny fraction of the total it will take more than a year for all staked assets to become available. Additionally, now that withdrawal restrictions are lifted it makes staking ETH more, not less compelling that it was before.

We might also see the emergence of a genuine ETH yield curve. The reward for staking ETH is the participation in the transaction validation incentives (fees). So, in this case, there is ‘genuine’ yield – a bit like bitcoin mining.

Secondly, the POS changes have meant that ETH has become a deflationary asset, supply has likely peaked in late 2022. The issuance curve is largely determined by the level of activity on the network (which causes tokens to be burned) and the issuance of staking rewards. There are some further interesting statistics and charts on exactly how this works here.

The weakness in all of this is that changing the ETH supply curve is now in the hands of a small body of large holders who can largely determine the path of the currency. Its supply curve has already changed many times and I expect it to change again. In governance terms it more closely resembles fiat currency than bitcoin but there is no arguing that the demand/supply dynamics of ETH have completely changed, and for the better for investors.

The Shanghai upgrade is scheduled for March. Considering the history of very long delays, I would think that June is a better bet. Come mid year, we will have a deflationary supply curve for ETH and we will be 9 months out from the next step down in bitcoin issuance too. Supply dynamics are moving in our favour. On the demand side we will have to wait and see.

Let’s take a look at some of the institutions that the European Union has created over the years. Obviously, our favourite institution is the European Central Bank. There are 76 such institutions across the EU though. 75 of them you have likely never heard of. Some highlights:

Literally plants though. Not industrial facilities that employ and feed thousands, no, no. This office “manages the European Union system of plant variety rights covering the 27 Member States.”

The EU has its own Mother Nature, which is really something. There is a full application and appeals process if you don’t feel that your plant variety has been fairly treated. Their accounts for 2022 can be found here. They spent €8 million on staff costs doing the plant thing.

Yes you are. The mission of the Euratom Supply Agency is to maintain a regular and equitable supply of nuclear materials (ores, source material and special fissile material) for all users in the European Atomic Energy Community.

This one is monumentally bonkers – their quarterly report sets out that in Q3 last year they processed only four contracts, four!. Obviously the war in the Ukraine has had an effect because they didn’t even do one contract in Q1. They have eight people managing nuclear purchases for everyone in Europe and 800 doing plants.

You might also like their Annual Report. Please go directly to page 4 where they lay out their achievements for the year. It’s a word salad, confirming they achieved nothing.

KDT JU funds Research, Development and Innovation projects in Electronic Components and Systems, engaging finances from the EU, countries and participants for innovative activities that make a real difference in our society and your personal life.

Here’s their recommended content on the website, an event that took place in March 2022. Not too much discussion on Electronic Components and Systems it seems.

76 of these institutions. With youth unemployment in Southern Europe still above 30%, do they have an agency for addressing that? Nope, not as important as the plants.