These are nervous times for investors looking for shelter. Taking up the challenge is BlackRock, who when they aren’t buying all the family homes in America, also operate the iShares Treasury ETF.

Their website provides helpful resources showing exactly what historic returns would be for plucky bond investors. In circumstances like these, capital preservation is most important. The marketing material makes clear just why US Treasuries are excellent. “Use at the core of your portfolio” admonishes the prospectus.

You can find the fact sheet here. It is very professional and has resulted in over $22 billion in AUM for this fund alone. 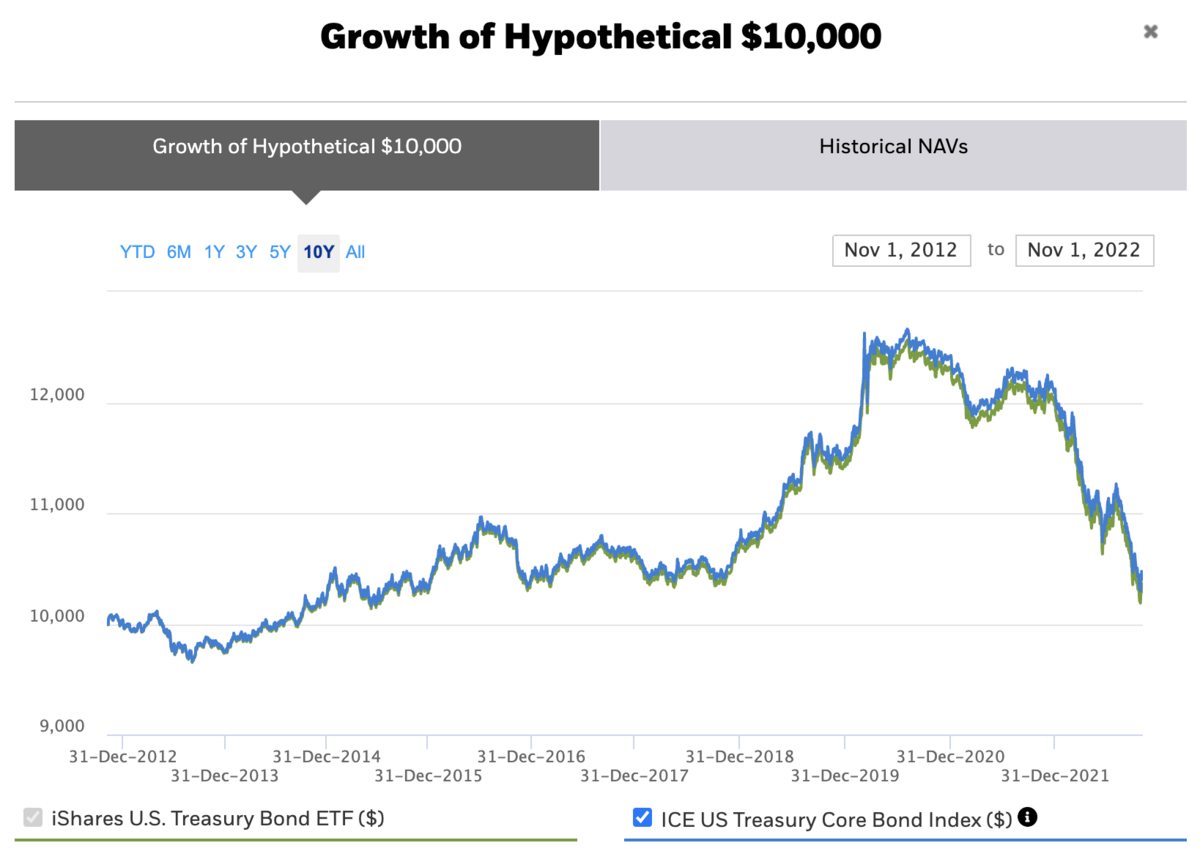 As far as capital preservation goes you would have to give it to BlackRock. $10,000 invested a decade ago is now worth $10,400 (assuming you reinvested dividends and capital gains). That’s right, they completely preserved your capital and even managed to give you $400 extra, after fees. For the mathematically weak, that’s $40 every year!

Most interesting is the discussion of risks in their prospectus. It’s the general stuff; economy, interest rates. Nowhere does it say that bonds might be the greatest international ponzi scheme of all time. Nowhere does it mention inflation. 56 pages and the largest risk to bond asset values does not rear its head?

To prove the point, adjusted for the change in US prices over the period the $10,400 is worth $8,100 in real terms (if you believe the US price index). So the single biggest risk did the biggest amount of damage, as one might reasonably expect, but BlackRock didn’t mention it anywhere.

It’s wild. $22 billion dollars, sat there withering away at an accelerating rate. History tells us that governments will always find a way to default on their debt, either openly or via monetisation. It’s happening right now before our eyes. BlackRock are quite open about it. To give them their due the growth chart includes no obvious chart crimes other than the reinvestment of dividends.

The only explanation I can offer is loss aversion. There is simply a very large portion of the world that cannot stomach losses at all and would prefer to receive their massively real terms diminished principal back in full. I suppose if you don’t take part, it’s not possible to lose.

For BlackRock’s part, they have two full-time fund managers working on the product and generate $11 million in annual fees. I salute them.

As bitcoin’s mining hash rate continues to rise, the pressure on the bitcoin miners grows. The latest casualty looks likely to be Core Scientific. Back in January 2021 they listed on the NASDAQ, raising $200 million. They had 5,300 bitcoin on their balance sheet which later that year would be worth over $300 million.

As with most of the miners though, they have been selling their coins and running down cash reserves for over a year. They announced to the market that they will likely run out of money come December. Back in July, they dumped 2,000 bitcoin on the market to shore up their balance sheet and now only have $25 million in cash and 24 bitcoins.

Every bitcoin cycle has been marked by similar events. Miners eventually capitulate, selling their coins to fund operations which puts even more pressure on price and becomes a self-fulfilling prophecy. Bankruptcy.

As a general rule for investors, this has typically marked the bottom of the bitcoin cycle because once miner reserves are depleted, a huge chunk of sell pressure is removed. Miner bitcoin reserves have not been this low since 2010, they have sold nearly everything they have to keep going and yet the mining industry has never been stronger. Hash rate is at an all time high and the stronger mining companies will pick up the slack (and the mining equipment) and keep going.

Core Scientific, by their own admission, look unlikely to survive. Compute North, another listed miner, went bust last month owing some $500m. There will be others before the end too. London listed Argo Blockchain looks a solid candidate for financial difficulty before the year is out. Will it make a difference to bitcoin? No, the blocks will keep coming every 10 minutes. For investors, the sell pressure of the last 12 months is abating. Cheap coins have been everywhere thanks to DeFi bankruptcies and now the end-of-cycle miner collapses.

70% of bitcoin supply has not moved for over a year; once again we are getting into extremely tightly held territory so when the price starts to move it will move quickly. Sharp downward movements are still likely but one thing is sure, the selling trend is starting to slow. 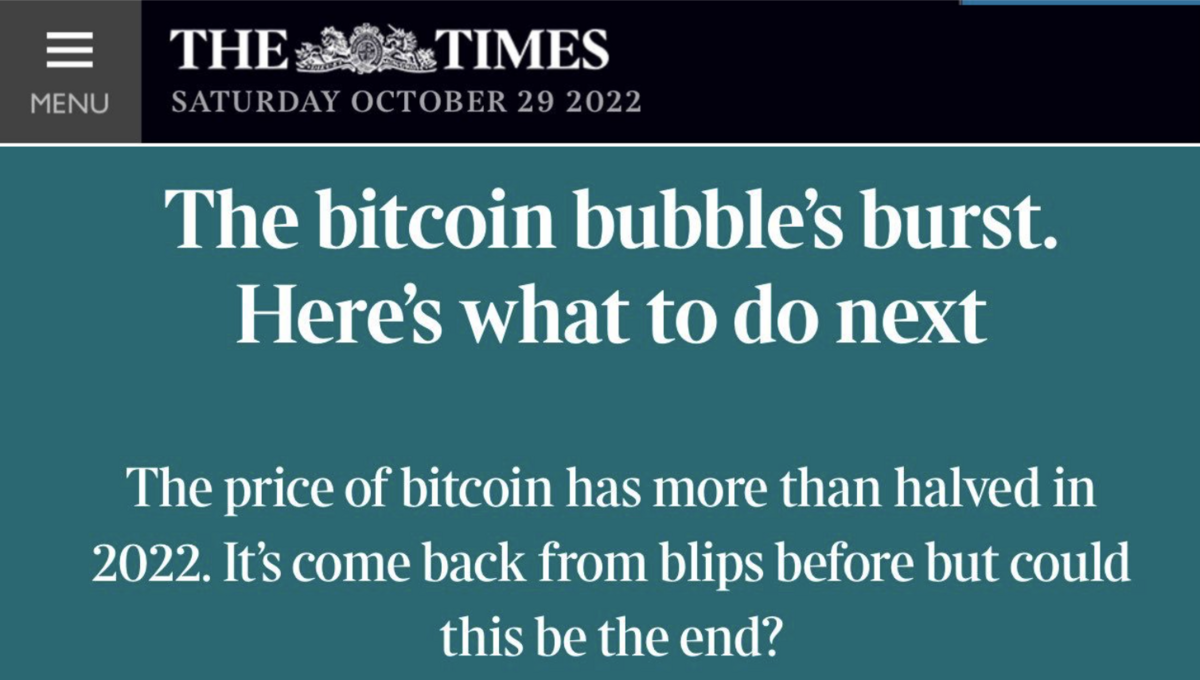 Just like miner bankruptcies. Declarations of ‘the end’ are normally indicative too. Retail interest in buying bitcoin at the moment is almost zero. The only activity is from institutions, bitcoin miners and developers across the world building out the platform (including the Lightning Network).

To be clear, the price can go down from here, but having done this for a while, we are seeing all the end of cycle signs. Note also that come May 2023 (now only six months away) the halving countdown will be on.

As Michael Saylor pointed out, companies that have invested in bitcoin have outperformed everything else on the NASDAQ. 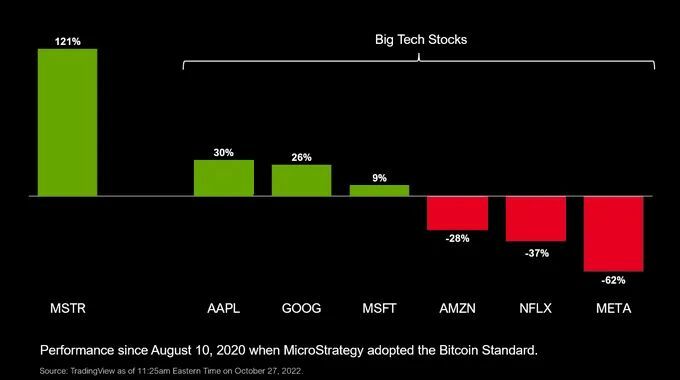 MicroStrategy (which has an enormous corporate treasury of bitcoin) is up 121%. The extreme example is Meta down 62% and even Amazon, down 28% over the same period. MicroStrategy reports this week and should start buying bitcoin again later in November (at a guess based on their disclosures and previous behavior).

The headline is the headline though and it is sufficient to satisfy people who have never bought bitcoin that “see, I was right” even though nothing could be further from the truth. 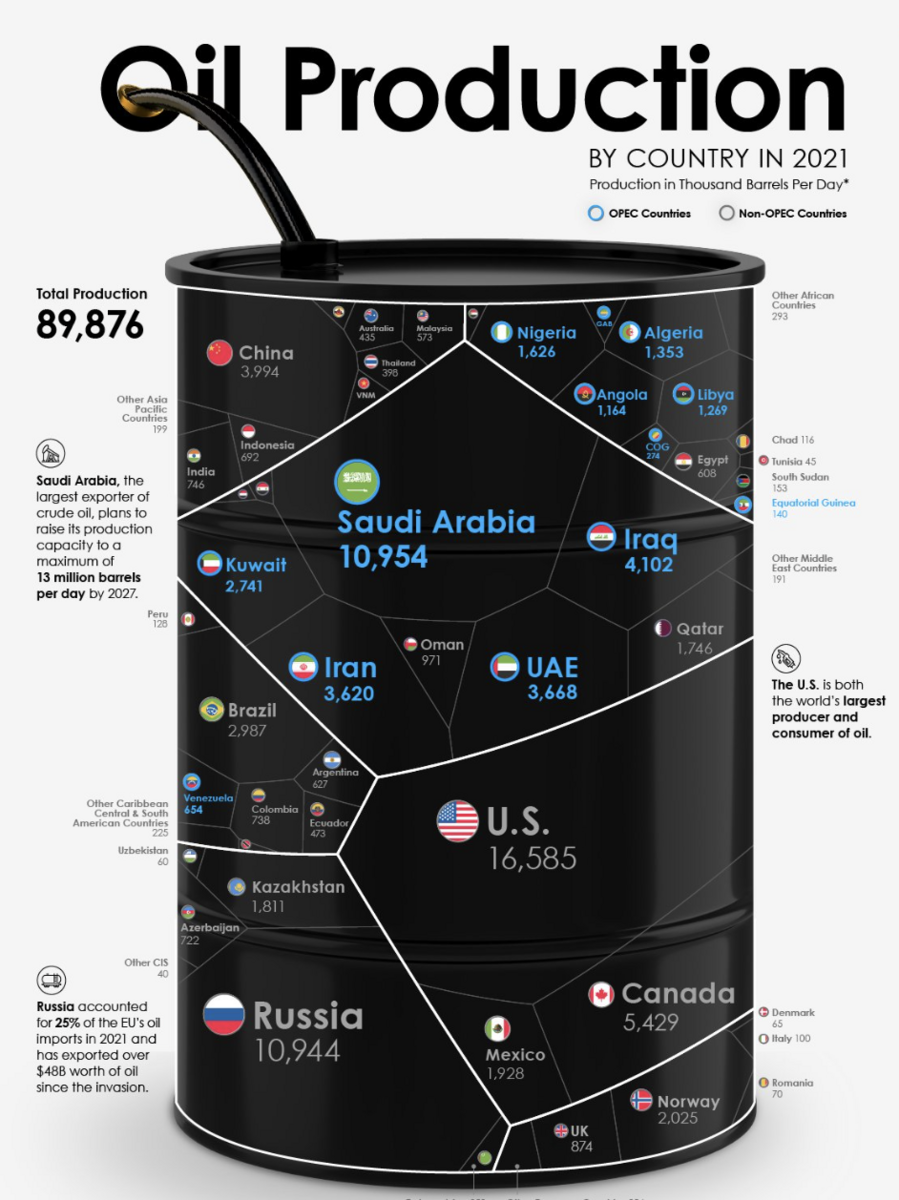 I found this rather eye-catching. Not least because I don’t think it is that well-known that the largest producer of oil in the world is now the USA. It’s not even close anymore. By contrast, Australia (at the top in the middle of the barrel above) produces a mere 435,000 barrels a day. It seems like nothing, but it is just under 50% of the total amount consumed locally.

The vast majority of that oil is exported and then refined products are brought back onshore. Even so, Australia is 50% of the way to oil independence on raw production numbers. There is also a great deal more under the ground and off the ocean shelf.

Most of the oil in Australia is used for transportation, so if electrification or hydrogenification becomes a reality, oil independence is a viable goal. As I wrote a few weeks ago, Australia actually wants for very little when it comes to natural resources, so solving the oil conundrum might prove very valuable indeed over the longer term. Throw in some large bitcoin mines and we could be set here for the next 100 years. 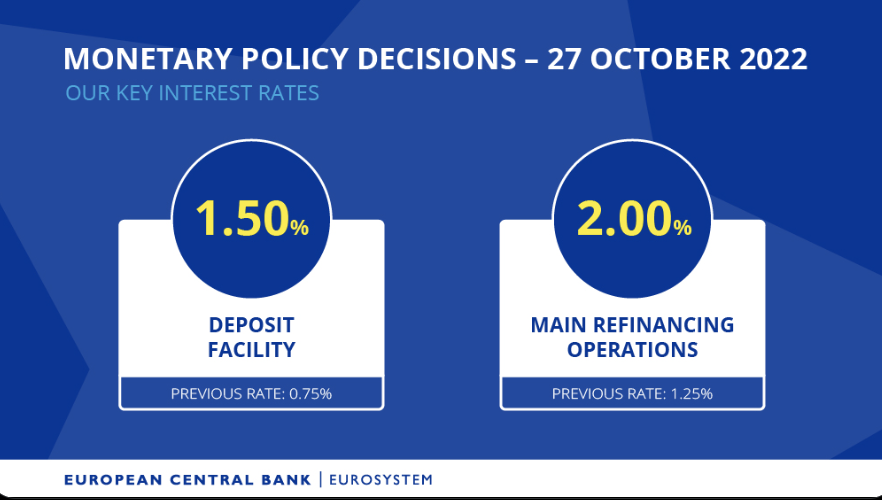 They are on the brink in Europe. A 75bps increase took interest rates to 1.5%. The very next day Italy announced inflation of 11.9% massively over the market expectation of 9.6%.

It’s worth nothing that inflation rates have never been brought down by anything other than an interest rate higher than the inflation rate. In Europe the gap is gaping wide, nearly 10%.

There is a very good reason why interest rates aren’t rising faster too and that’s because it would bankrupt the weaker European governments of Italy and Greece in particular and bring about the demise of monetary union. So the horrible position they are left in is the one we see. Mega-inflation and no real hope of bringing it down without a huge recession. High interest rates might do it but a far better solution is to invest in new sources of energy that don’t require enormous public sector subsidy. That isn’t happening. There is zero chance of any major productivity leap in Europe either; the last meaningful thing they invented was the croque monsieur.

The ECB house is ablaze. A likely story now will be a change to the inflation target of 2%. I expect at some point in 2023 we will be told that we “should expect a target in the range of 3-4%”. This will be good for you because [insert fraudulent reasoning here]. In doing this the net burden of bankrupt country debts should fall much more quickly than otherwise. There really isn’t another option now and you could sensibly get out of the Euro if you are in it.