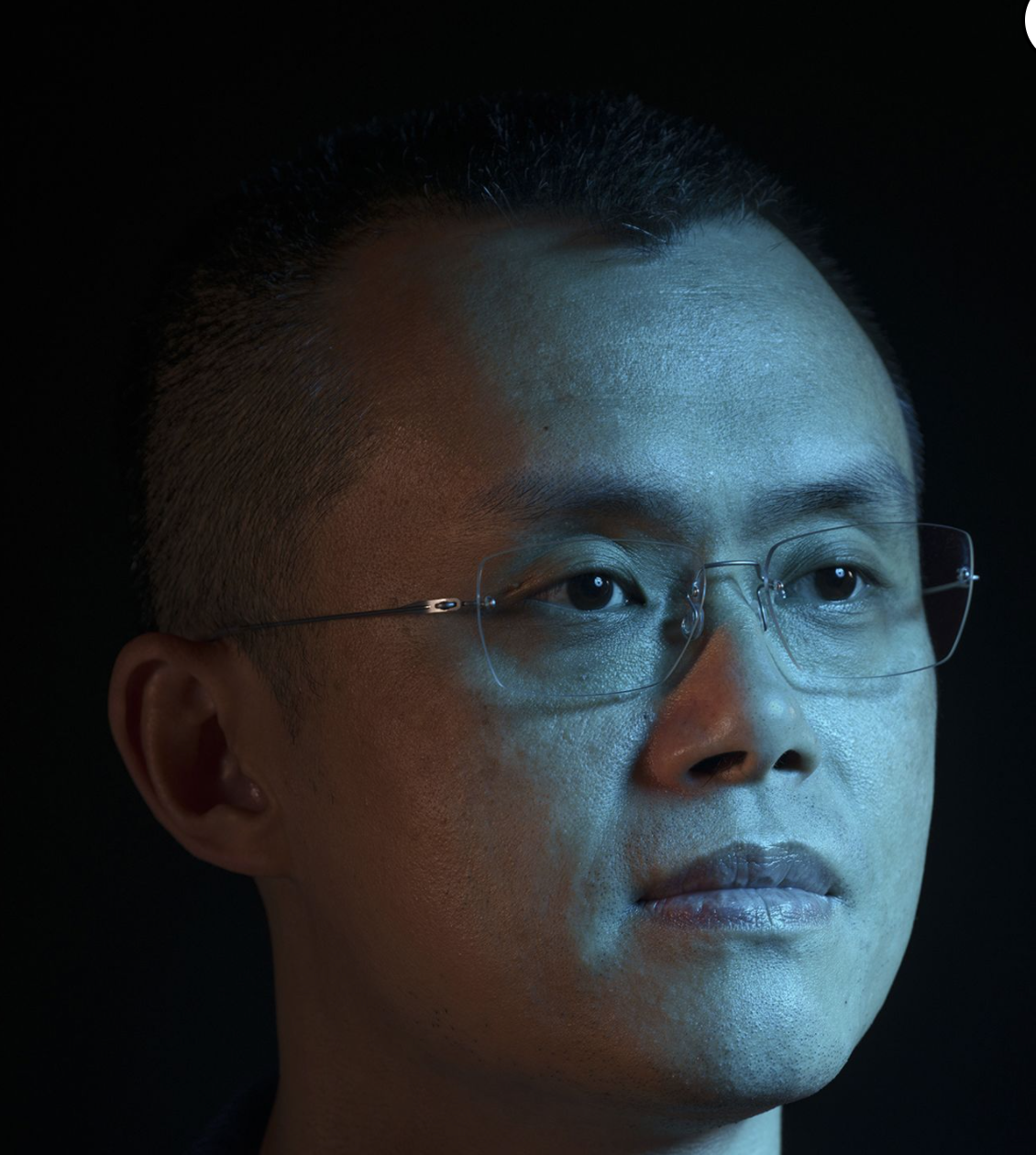 You don’t know this man and you have probably never heard of him. His name is Changpeng Zhao, known in the industry as CZ. I put it to you that he is the richest man in the world.  Common knowledge has it that Elon Musk on $275 billion, closely followed by our good friend Jeff at Amazon vie for that title. My suggestion is that is not correct.

CZ formally stands on $96 billion according to Bloomberg but that excludes any of his cryptocurrency holdings which one imagines are substantial.

He is the owner of cryptocurrency exchange Binance which dwarfs all others globally, although again, most people would believe Coinbase is the biggest, it is not even close. 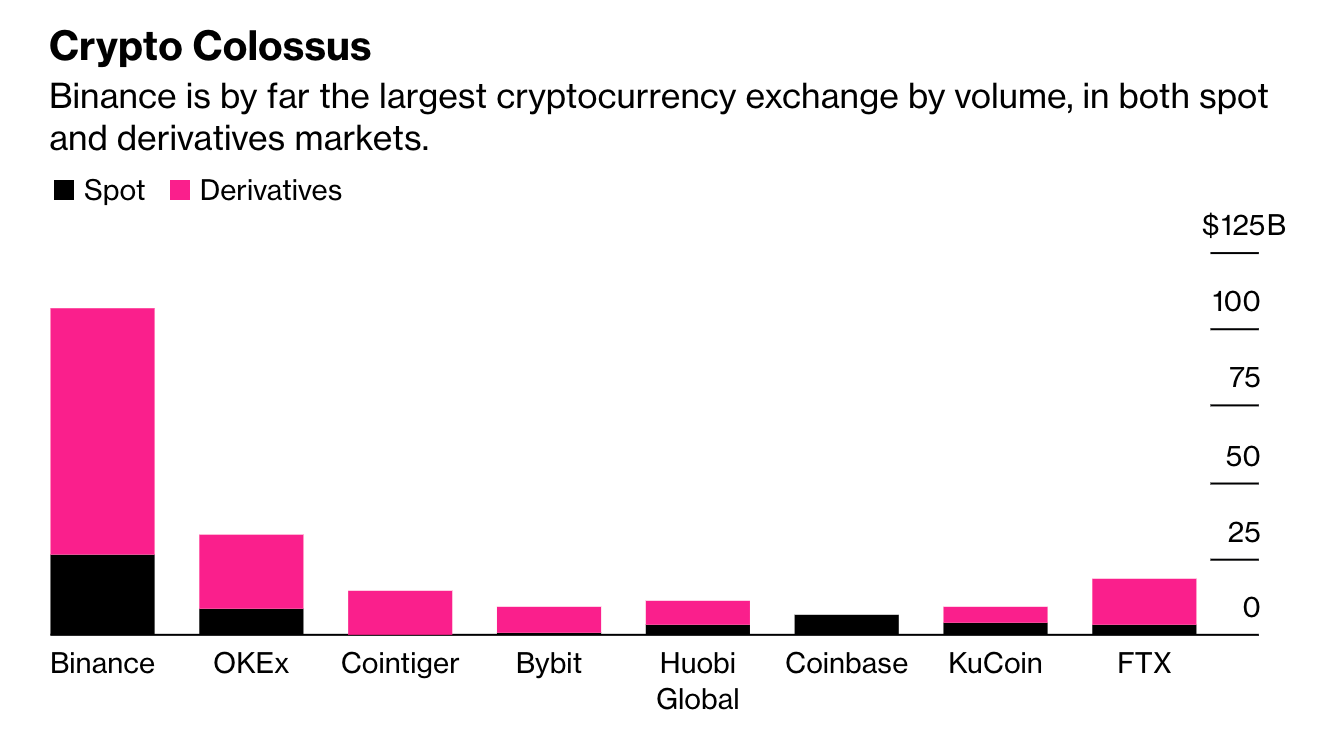 It’s been a very turbulent few months, with more to follow no doubt. A new industry is being built though. Like the internet titans who emerged over the course of a decade, there is a new class of entrepreneur emerging from this sector. It isn’t going away. Mr Zhao is likely to face difficult times this year with regulation emerging and multiple regulatory attacks on his business worldwide but he now has enormous resources with which to make things happen and his track record of doing so is second to none.

If he isn’t the richest man in the world today, he will be. Watch this space. 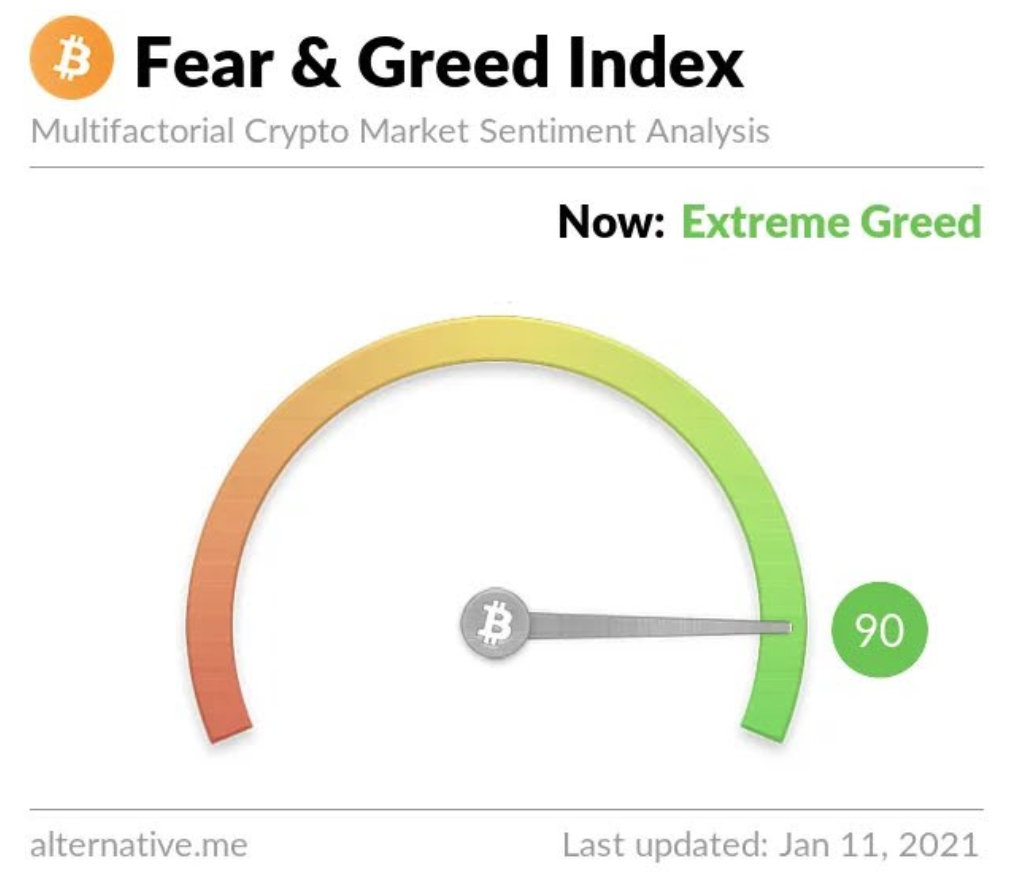 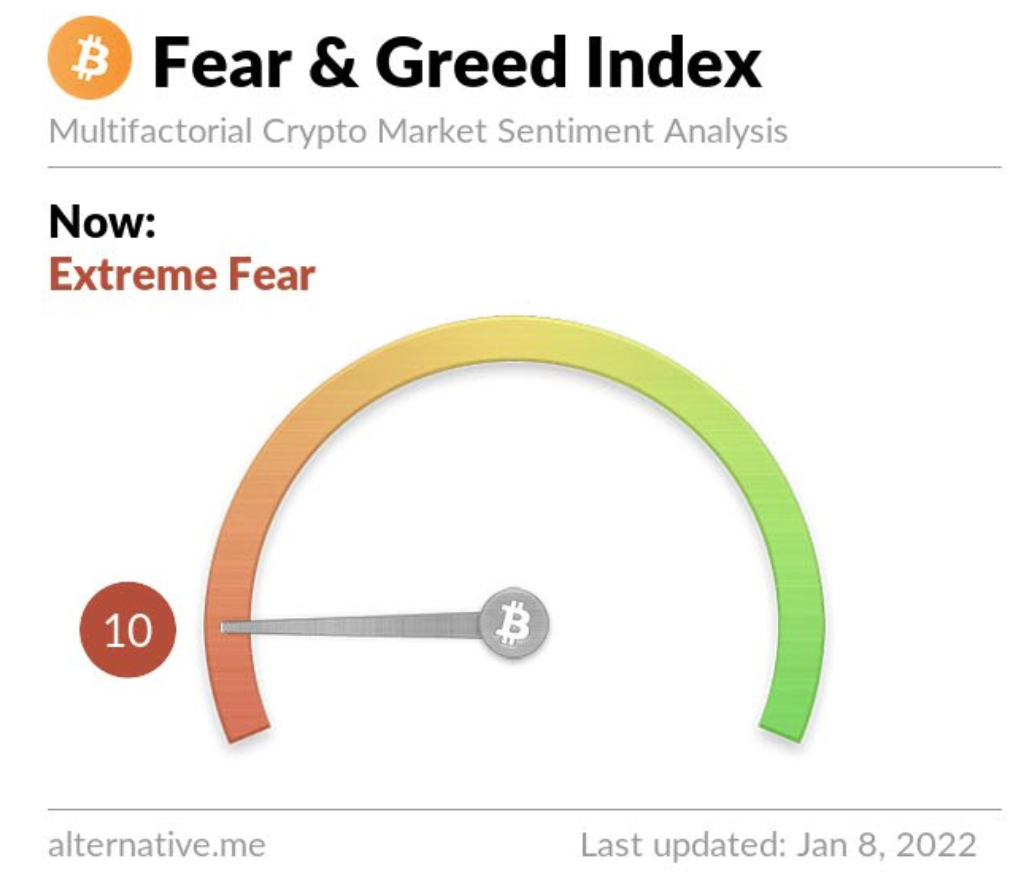 This time last year it was leverage, extreme greed and excitement all around. This year; depression, selling and the dream is over. The price? It’s basically the same.

As we have discussed on many occasions, the time horizon for this investment class is always four years and more. In the short term its simply all over the place and you are better served simply zoning out and waiting. The fact of the matter is the ecosystem continues to grow, the demographic pressure continues to grow with younger people investing in digital assets rather than stocks and bonds. There will be hurdles and bumps in the road. So what? 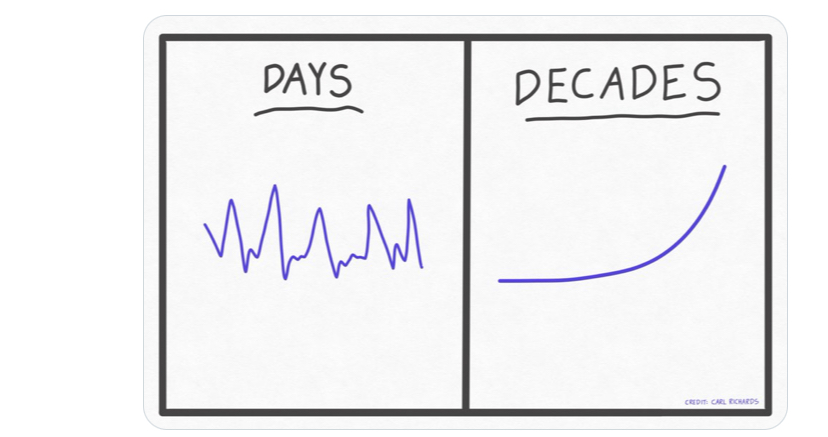 The general consensus appears to be that as rates rise in the USA, risky sectors like digital assets will get crushed and certainly that seems to have played out since the Federal Reserve started signalling inflation panic late last year.

There is an absolute truth in the fact that rising rates, cause rising discount rates and all other things being equal asset price should fall. But……..

The more interesting part is perhaps that the author of this article is Christopher Joye, portfolio manager at bond investment house Coolibah Capital. One thing in this environment is certain, bonds will get crushed in a rising rate environment. Now he may wish too that other asset classes are equally likely to get destroyed but is it true that this applies to the core assets in our fund, like bitcoin?

1. Does anyone really invest in bitcoin hoping for a 2% return? Does an interest rate of 0.5%, 1%, 4%, 7% make a difference at all in the medium term? The opportunity cost of holding cash has always been far higher than the interest rate suggests. Even considering that, given the end of the risk spectrum where we reside, does the interest rate matter at all?

2. The whole point of bitcoin is for exactly markets like these where inflation is running rampant. Our investment thesis is playing out exactly as we had forecasted. Massive money printing (done), inflation crisis (happening), bond market disaster (coming to a government near you).

So, while higher interest rates or the prospect of them may not be good in the short term, come the middle of the year perhaps the US government is forced to rethink as QE tapers and they need to find new buyers for their awful bonds. When that US bond market starts wobbling, it will get very exciting, very quickly.

El Salvador’s bitcoin development is continuing at quite a pace. We were treated this week to a tour by the president of their power generating facilities. He was responding to a message from Steve Hanke, the US government’s foremost dollar shill. Remember this tweet, however rude, is coming from an elected national president. 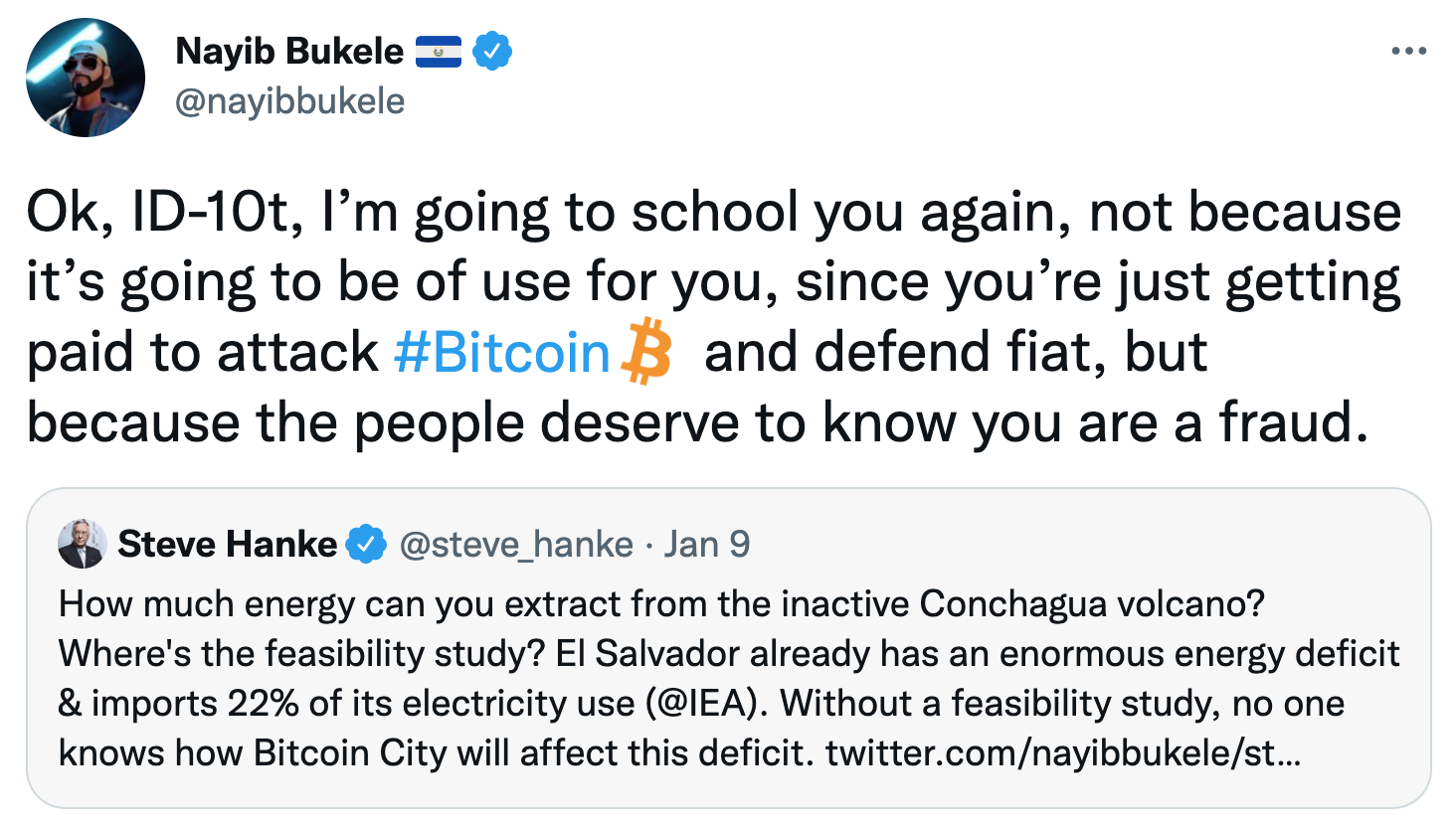 He went on to explain how El Salvador has an energy surplus that they are now starting to utilise. Much of this will be used to power their new “Bitcoin City”. 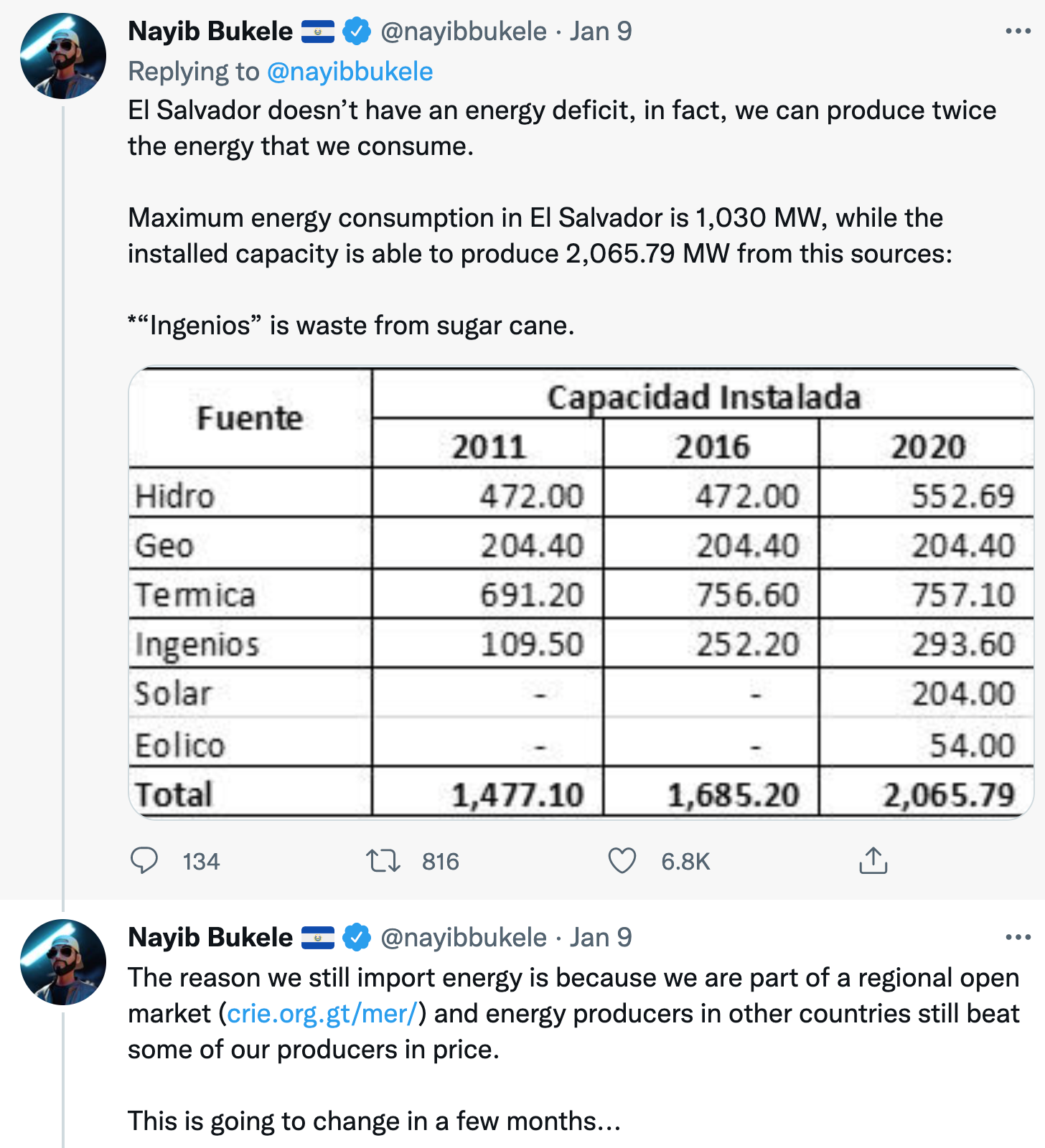 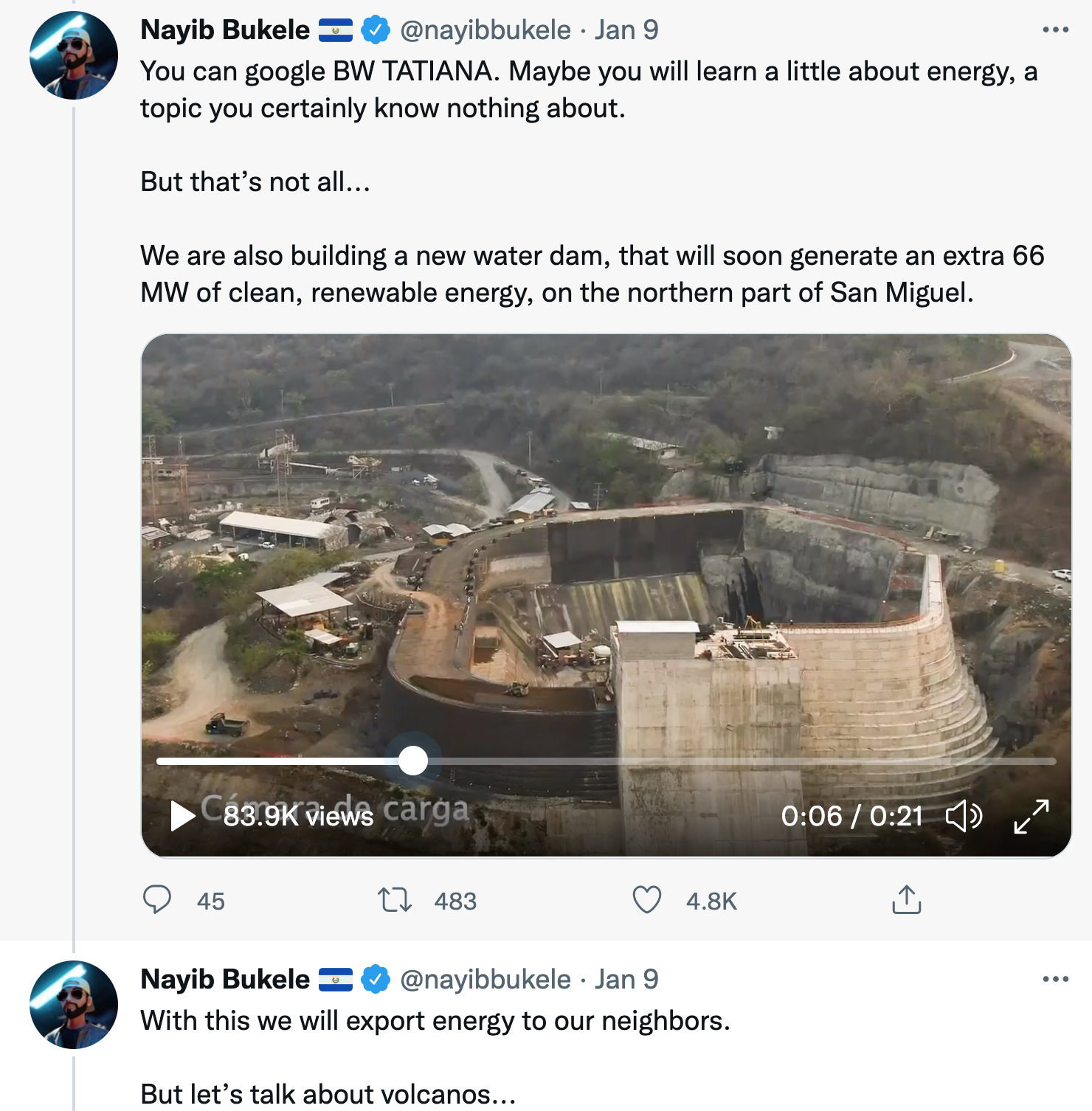 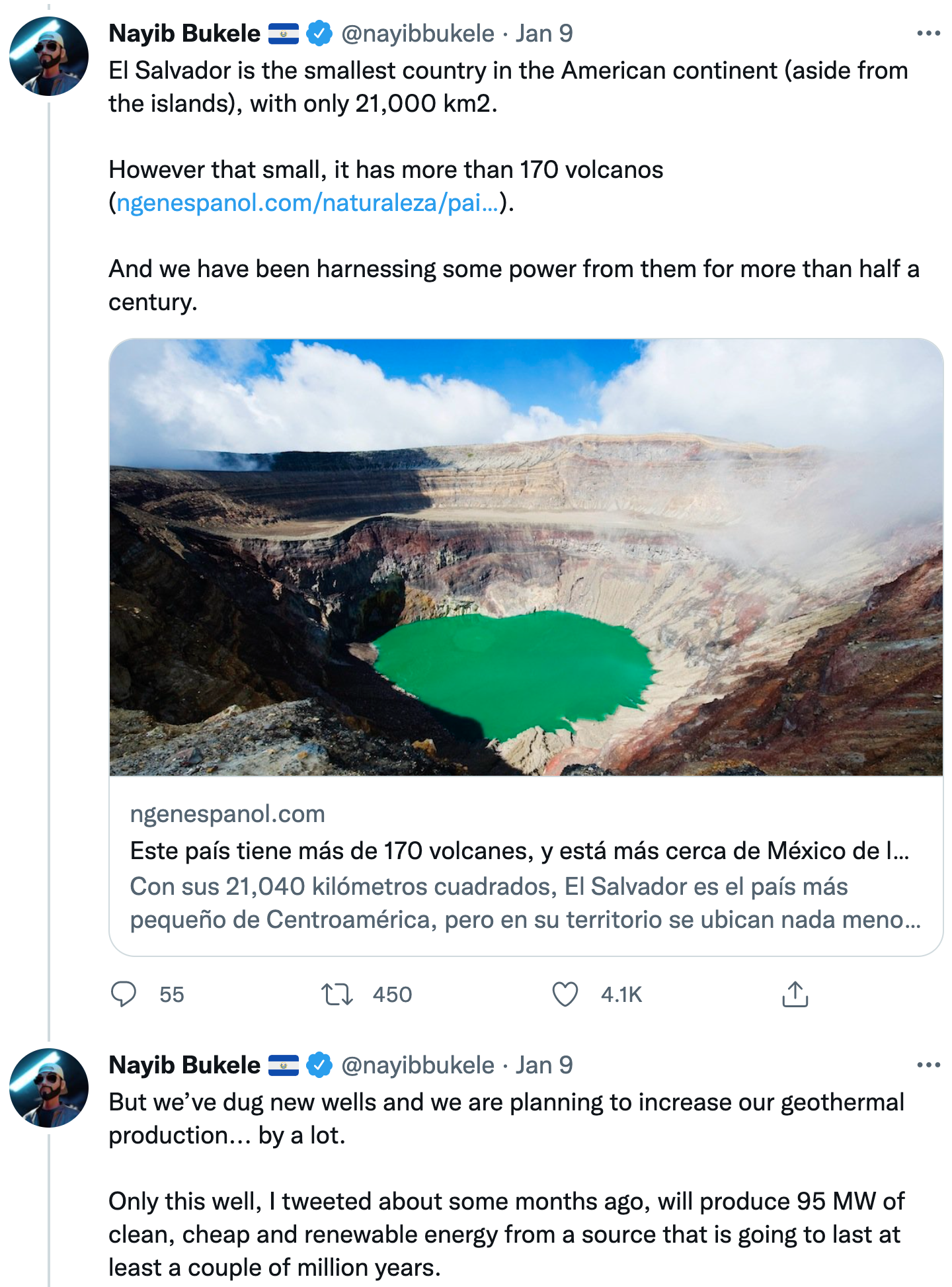 All of this might sound like a giant fantasy. Maybe it is, but raw facts are this country is now issuing bitcoin bonds, building a city around bitcoin mining and development, all of which will be powered by the naturally occurring geothermal resources. I doubt it will be easy, but it surely is ambitious.

Energy is money. It is the purest form of money and the closest thing representing energy is bitcoin. El Salvador is proving it and I hope they succeed. When you hear that there is no real use case for bitcoin you are likely hearing from someone who does not understand the proof-of-work protocol inherent in bitcoin. It is literally transforming an entire nation.

The question, perhaps, is why do the Americans want El Salvador to fail? Indeed, they declared failure last month in an article published on the Washington Post owned foreignpolicy.com website. The full article is here.

You would scarcely believe they are talking about the same thing, but the battle for currency dominance will be fought on all fronts, including state influenced media outlets.

20 years as a beacon of stability. The official statistics from the EU show that there is some truth to Lagarde’s comments. The Euro has been very consistent in the rate of its decline, having lost 40% of its purchasing power over the decade.

Those official statistics are rather generous, since if you wanted to buy a house, healthcare or education the decline has been many times greater. Still, it has been consistent and the fiat currency fraud has been very well choreographed in Europe since the Euro’s launch, full marks on that score. 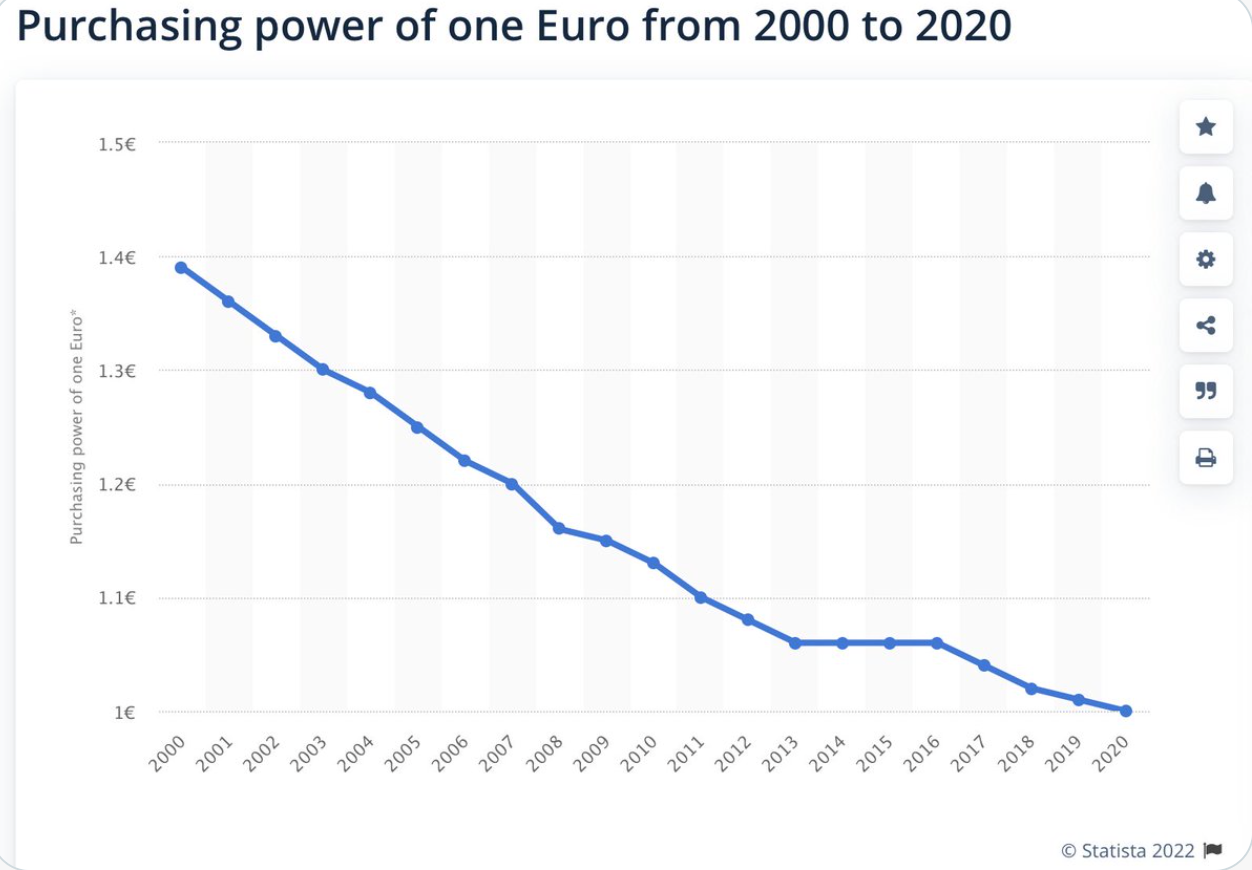 2022 promises to be interesting for the the Euro.  Very clearly there is less anxiety at the ECB about inflation than there is in America. It might be reasonable to expect the Euro to have a very tough year against the dollar but we have been expecting that for a while and have been wrong. Things change quickly though, just ask Turkish Lira holders.