This is our final note for the year. Despite an ordinary finish, it has been an amazing year. There is no question that our core asset hit the mainstream in 2021 and this time around due to institutional adoption.

Irrespective of short-term prices, our macroeconomic thesis continues to play out. We only see that accelerating as we go into next year and beyond. Fiat currency is in its death throes, which may last decades. Throughout history the best technology (and newest) has been used as money, mostly because it was hard to forge. First it was clay, then bronze, then silver and gold. The printing press came, and paper money followed.

Is it really such a surprise to people that now we have discovered cryptography, a money that is protected by the newest technology should prevail? The best money will win, like it always has throughout history. What is happening is far from new.

With that in mind here are some ideas for you to ponder into 2022.

Is there now a maximum interest rate?

US national debt now stands at $29 trillion. Interest on that debt is now the fourth largest line item in the budget, at $0.4 trillion per annum.

US national debt now stands at $29 trillion. Interest on that debt is now the fourth largest line item in the budget, at $0.4 trillion per annum.

If the US was to pay the long-term average interest rate of 4.5% on its debt, the annual charge would be $1.3 trillion, making it the largest item of spending.

We know that the other line items, like Medicare and social security, are only going to rise with an ageing population. It also seems unlikely that defence spending will be cut. So, with an annual Federal deficit of $2.8 trillion per annum already, even a very basic model has their debt spiralling out of control.

At 4.5% things get out of control very quickly. Eventually the bond market will buckle the Americans. Their auctions will fail, bidders will demand higher rates of interest and the Fed will step in and buy the bonds directly making the situation even worse.

Counterarguments are tax increases, inflation driving tax brackets and an improving tax base. Maybe that will slow the charge but inflation will certainly speed the rise in rates too, as we saw this week.

IDEA #1: The maximum interest rate the USA can now tolerate is somewhere around 3%, maybe lower. It will remain there until the US Dollar hyper-inflates, which it will, before 2050.

To prove the point, the US President made a video this week about signing something into law that will raise the US Debt Ceiling. He claimed that the “US always pays its debts when they are due”. That may be true, but they are using borrowed money to do it. In fact, if they were really paying their debts, there would be no need to raise the debt ceiling at all.

I will make you an offer.

You can work for me. I will pay you 150,000 currency tokens per year. I cannot tell you the ultimate total supply of tokens, only that on average (since about 1960) the number of circulating tokens has doubled every six years. Would you accept?

Most people would say no and yet in their real lives they accept exactly this bargain. It is a terrible deal and yet currencies across the Western world do indeed double their nominal circulation every six years or so. Your salary, whatever your success, will not keep pace.

IDEA #2: If you are measuring your wealth or progress in dollars, you are doing it completely wrong. Start 2022 by calculating how much you would like to advance in a scarce asset, you don’t need to choose bitcoin just choose something valuable like art prices. Sotheby’s provides something called the “Mei Moses All Art Index”, measure your progress against that index. I guarantee its much slower and indeed, you may well be going backwards.

A reminder for you of something we posted earlier this year to prove the point. Australian house prices versus the NASDAQ index (you could use almost anything though). A sad story, they are going down 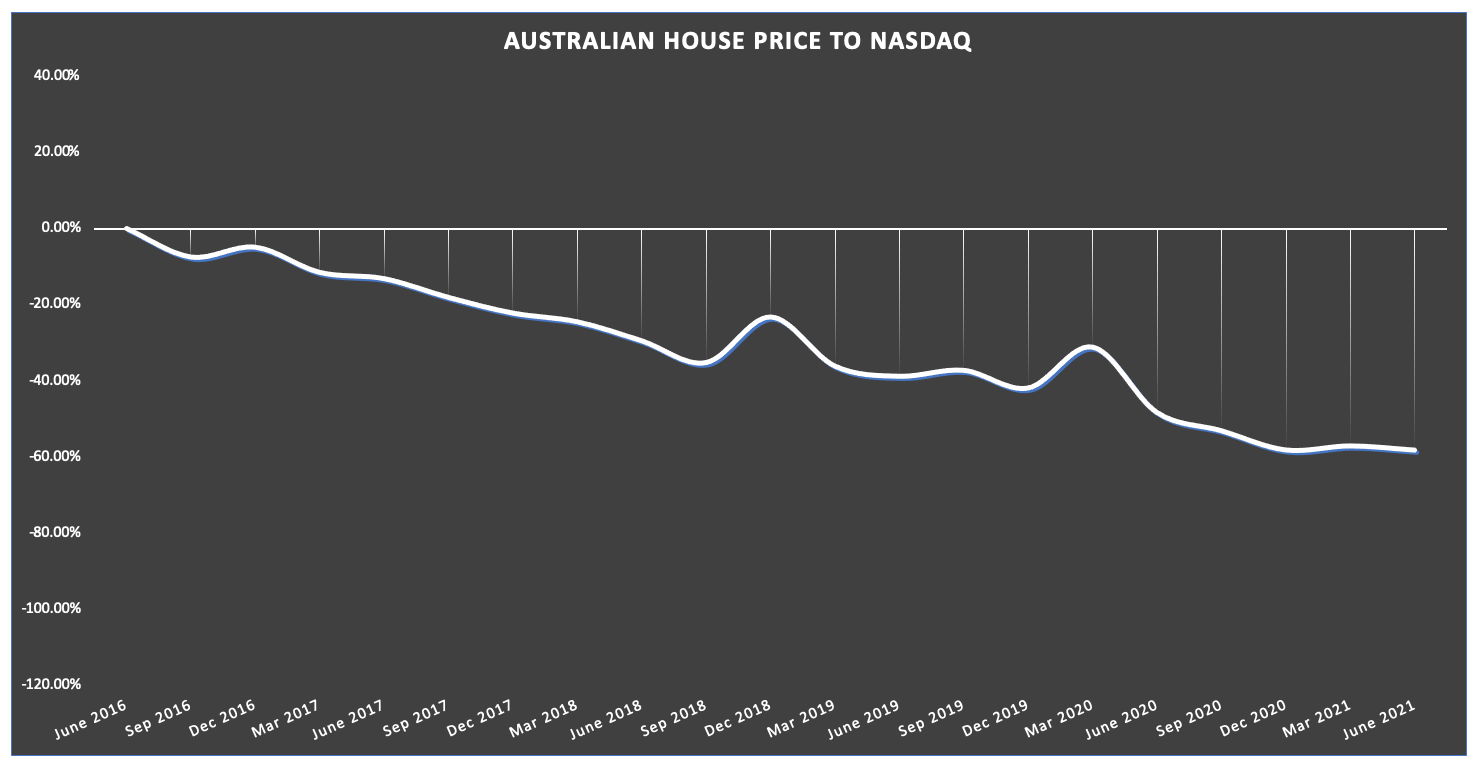 Most things are pretend

The most revealing thing about last week’s US inflation rate was not the 6.8% that was reported but the fact that if inflation was calculated in the same way as it was in 1980, the rate would be 14.9%. It’s the worst reading since 1947.

That’s not really the issue though. The number itself is entirely pretend, it is massaged and manipulated to yield the required result, and this happens across the world to make things sound better. Not just with inflation either, you can be pretty sure that any time a data point is spewed at you by the government, it has been hand massaged to within an inch of its life. Fundamentally, they aren’t meaningful numbers, just stories.

IDEA #3: most things in financial markets are pretend. 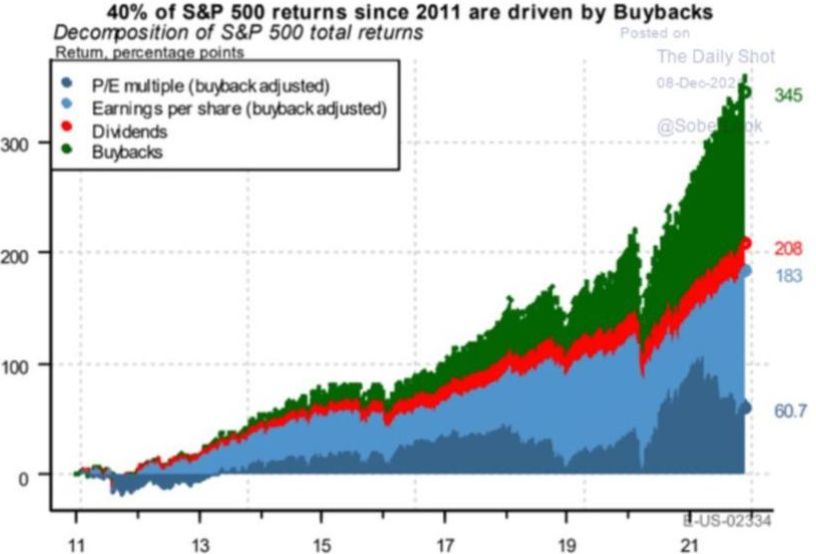 The way the economy is managed today, the overwhelming temptation is to get into debt. Firstly, inflation will whittle away that debt. Secondly, the debt is insanely cheap versus what you might buy with the asset.

So broken is the financial system that Bloomberg gave some tips to Americans this week which included “spend your pay check right away”. 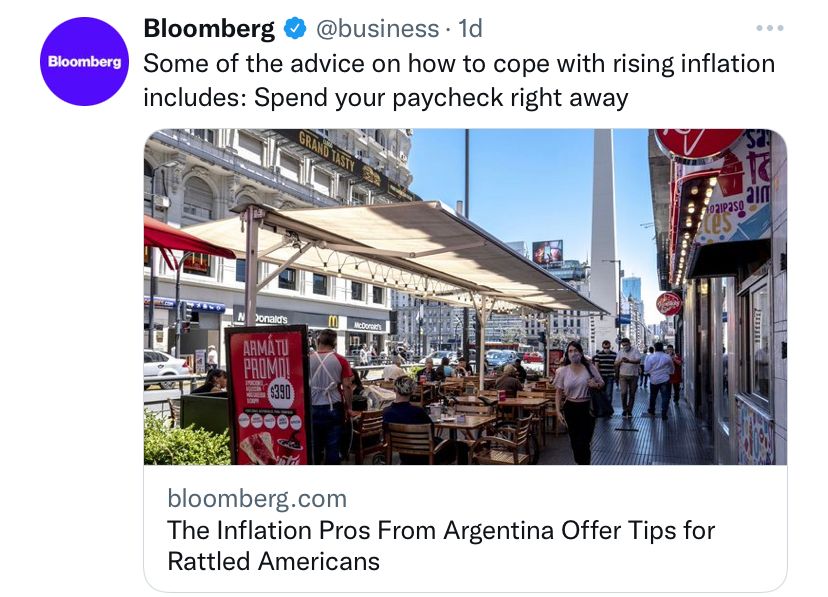 IDEA #4: The financial system is stood on its head.

Why? Because the rewards should be to saving and prudence but they absolutely are not. The current settings reward extreme leverage and mis-priced risk taking.  Even though people inherently know it is the wrong thing to do, they are compelled to because they either play the game or get left behind.

The most disturbing thing about the Bloomberg article is that it is right for all the wrong reasons. 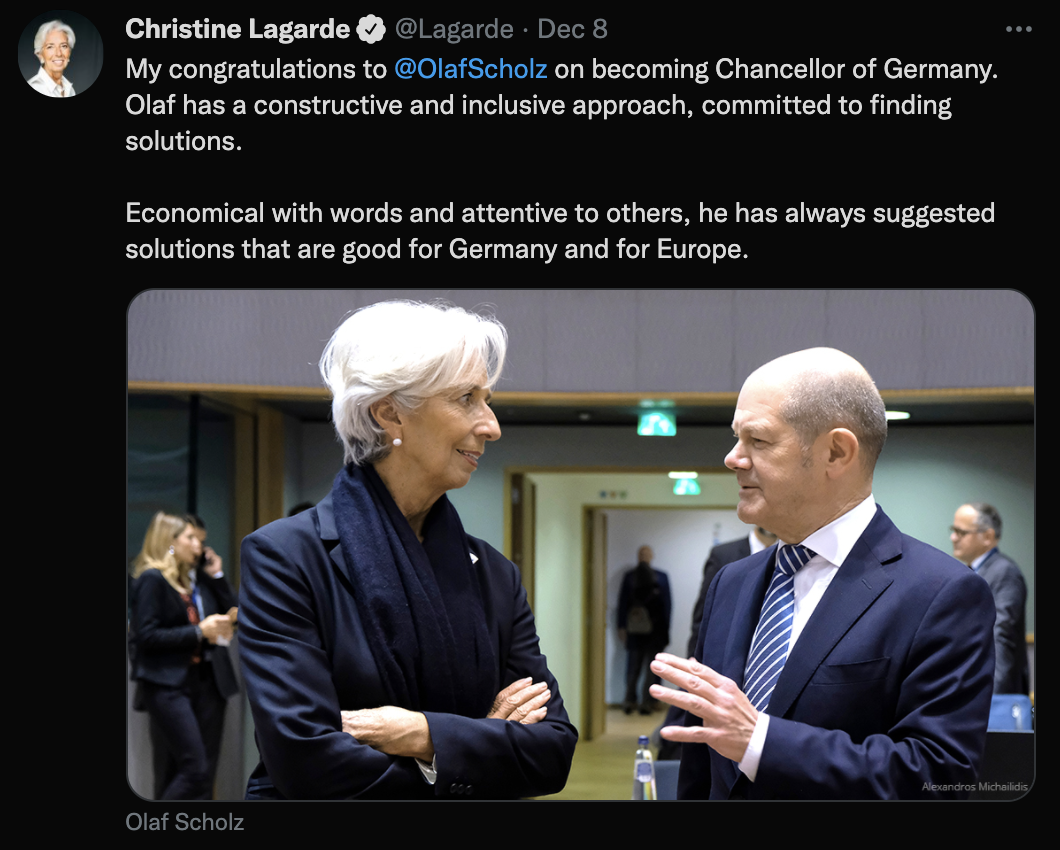 Finally, very great failure in Europe will be rewarded in 2022. I predict that Christine Lagarde will be awarded something like the Nobel Peace Prize. Why? Tensions are going to grow very sharply because of both the inflation that now grips the continent and the changing guard in Germany.

Europe’s paymaster is under the new stewardship of Chancellor Olaf Scholz. A man who favours a financial transaction tax across Europe and who is no great friend of the Americans. In the past he has been very critical of the US imposing sanctions on Russia’s Nord Stream 2 gas pipeline to Germany, saying:

“Such sanctions are a serious interference in the internal affairs of Germany and Europe and their sovereignty.” 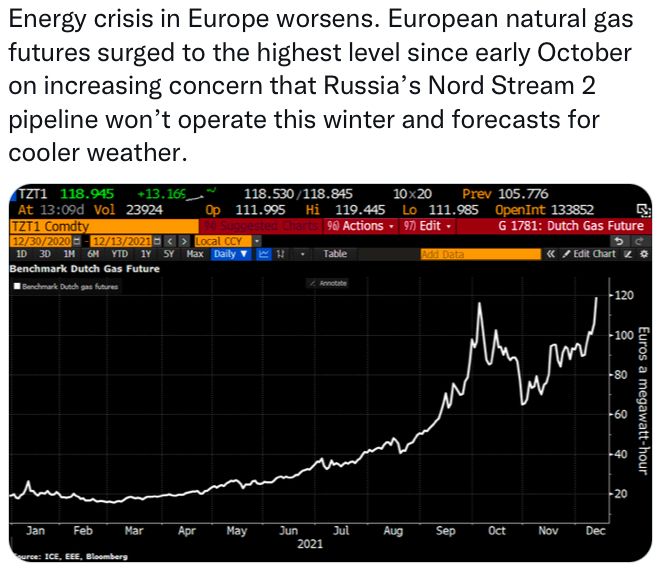 IDEA #5: Times are changing in Europe. The cure to the building tensions will be massive financial giveaways funded by the ECB. The reward for these fallacious solutions will go to Christine Lagarde. As usual, I expect it to be large and politically motivated.

All told, it’s a terrific backdrop for us and we plan on ruthlessly exploiting the opportunities that emerge in 2022 for our unit holders.

Until next year then.