Next up in the FTX drama is Genesis Trading, perhaps the largest prime broker in the digital asset sector. Genesis is owned by the Digital Currency Group (DCG) who also happen to own the largest bitcoin fund in the world, the Grayscale Bitcoin Trust (GBTC).

GBTC trades now at a 43% discount to its NAV and it begs the question why? DCG were closely involved with some bankruptcies earlier this year. You might recall 3AC in Asia with whom they allegedly had a close trading relationship. As a consequence that has put them under some pressure which is now compounded by FTX.

The Grayscale Bitcoin Trust generates US$200 million in revenues at today’s prices. It is an excellent business and I would think that DCG will undertake all manner of efforts to preserve that revenue stream.

At a guess, the discount is now overdone. If you are interested in reading more on this, I published a deep dive on Livewire yesterday.

German delegates during a discussion on subterranean solar panels

With almost none of their key objectives met, delegates at COP-27 returned home this week triumphant. The key victory was the agreement to establish a loss fund for developing countries impacted by climate change. Rich countries will give poor countries money when it rains or is windy.

The fund breaks new ground because it’s the first international development fund that doesn’t exist, has zero money and has absolutely no agreement on how it should be financed. Presumably that will be discussed at COP-28. Believe it or not COP-28 is being hosted by the United Arab Emirates, a country where the climate has never really changed but does have a big fat airport and more air conditioning per capita than anywhere else on earth.

There were other meaningful retrograde steps too. The Paris Agreement to reduce temperature increases to 2°C died its final death. 1.5°C is now the target and there was considerable push back on that (all bets are that it will be scrapped next year in the freezing cold meeting rooms of some Abu Dhabi convention centre).

In total, 33,000 delegates attended over the course of the conference. Taking a long haul flight produces more CO2 than an average person generates in an entire year, so it’s perhaps no wonder we had such a lovely warm weekend here in Sydney while solar panelling our meat-free sausages.

At some point someone will call time on these absolute farces.

Even the ever-green Guardian agrees that the whole thing was a totally fraudulent shamozzle. Meanwhile, the FIFA World Cup is in Qatar, hosted in air conditioned open-top desert stadiums.

Something very positive is happening as a result of the FTX collapse. A lot of exchanges have started to publish their exchange addresses showing the amount of bitcoin they hold. The whole premise of a blockchain is that it is an open-source data set that anyone can view and validate. Exchanges can simply nominate their reserve addresses and sign them to prove ownership; from then on everyone can monitor what goes in and out and maintain records of exchange liquidity.

Ultimately where this goes will be dynamic reserve reporting, so the very best exchanges will dynamically report their bitcoin and crypto holdings and also their customer liabilities. It will be trivial then for people to check that exchange balances are 1:1 backed. It will not be perfect though, because the customer liabilities disclosed will be a number reported from the exchange’s database and could be open to manipulation but it is much better than what we have today.

It is actually incredible that in its insolvency disclosures, it turns out that FTX has no bitcoin at all. None, zero. That might not be that surprising either given its collateral qualities. As the house began to unravel the best collateral was used first and FTX bagholders have been left with a basket of garbage.

I suspect the lack of reserve disclosure has produced tremendous downward pressure on the bitcoin price toobecause some shady entities have been selling bitcoin they do not actually have. As we move on it will become increasingly important for exchanges to maintain and prove their reserves. The fractional banking practices used by FTX and others isn’t going to work and it will put real (upward) pressure on the bitcoin price.

There is an excellent data set here on proof of reserves. Which exchanges do it, how they do it and how it should be done. There is a huge opportunity here for industry participants to take a big step forward in credibility and have something far better than we have in the current financial system.

Talked about for years, it’s a shame it took FTX to focus minds and resources but it did and we will be all the better for it.

The bitcoin rich list is also becoming a useful resource, with many of the largest addresses belonging to bitcoin exchanges. 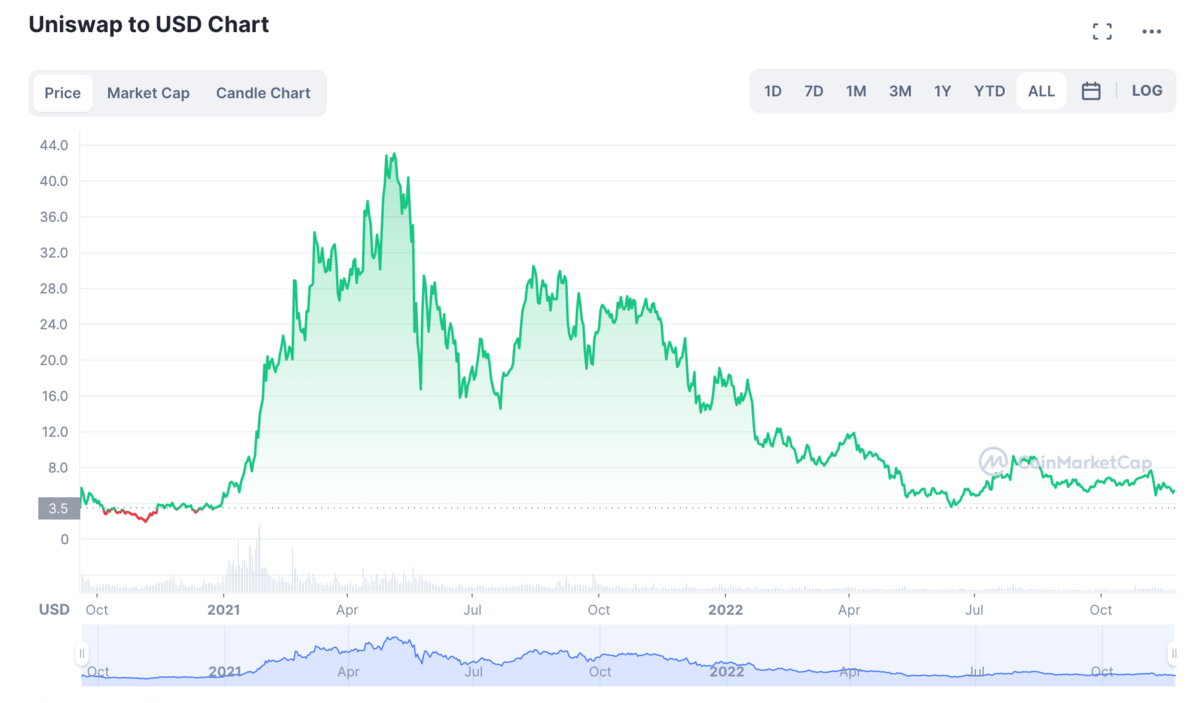 Our fund has been deeply sceptical of DeFi since we launched in 2018. The prospects of generating yield on digital assets (which don’t actually have yield) were never good and so we proceeded with extreme caution and did not invest beyond Ethereum. Uniswap has still returned its holders 5x since its launch in 2018 though, but the fall from $40 to $5 would have been painful.

The simple question here is whether there is a case for a software protocol that exchanges one asset for another? Not an exchange but an automated market maker. Uniswap, which launched in 2018, does exactly that and to be fair throughout the carnage of 2022 it has performed well (operationally). If they manage to weather this storm, and I see reasonable signs that they might, then there is a strong case for them to emerge as a big winner from the collapse of the centralised systems in this sector.

Would I rather exchange assets via software, rather than a centralised counterparty? Today, I’m not sure because the software is new and perhaps not yet fully tested. There is a good summary of how it works here (scroll down the page for the explanation).

The main issue I have with the automated market makers is their inability to deal with huge volume. The possibility for fast attacks at scale still exist because liquidity is variable and can be very low. The large, technically educated and skilled trader is hugely advantaged over the novice. That is not an environment that naturally generates critical mass.

We are at the lowest point here for DeFi protocols. I was told this week that “It’s pretty much over for DeFi”. I must say, I think the opposite. It’s just the beginning, and just a matter of who survives and who builds the most credible and open source software. One of these protocols is going to be huge, as in Google/Apple huge.

Christine is busy. Eschewing the opportunity to waste taxpayer dollars at COP-27 she stayed in Frankfurt to give a very dull speech.

“In December we will lay out the key principles for reducing the bond holdings in our asset purchase programme portfolio. In parallel, our tools for preserving the orderly transmission of monetary policy − notably flexible reinvestments under the pandemic emergency purchase programme and the new transmission protection instrument − will remain in place.”

To be clear then. With inflation approaching 10% and rising, the ECB will in December lay out a strategy for how they might reduce their bond holdings. It is a remarkable admission, if the fight against inflation is actually real they would be unwinding their balance sheet faster than you can say “convicted for fraud by a French court in 2016”.

The choice of words is also interesting: ‘flexible reinvestments’. That is not the reversal of quantitative easing and likely means the selling of ECB corporate bond holdings to reinvest in Italian bonds. The new transmission protection instrument has not yet been used, or even been fully explained. It will be simple though, we will sell German bonds and buy Italian ones. That cannot last forever. The ECB only has so much quality debt that it can dump to buy garbage after which it will have nowhere to run.