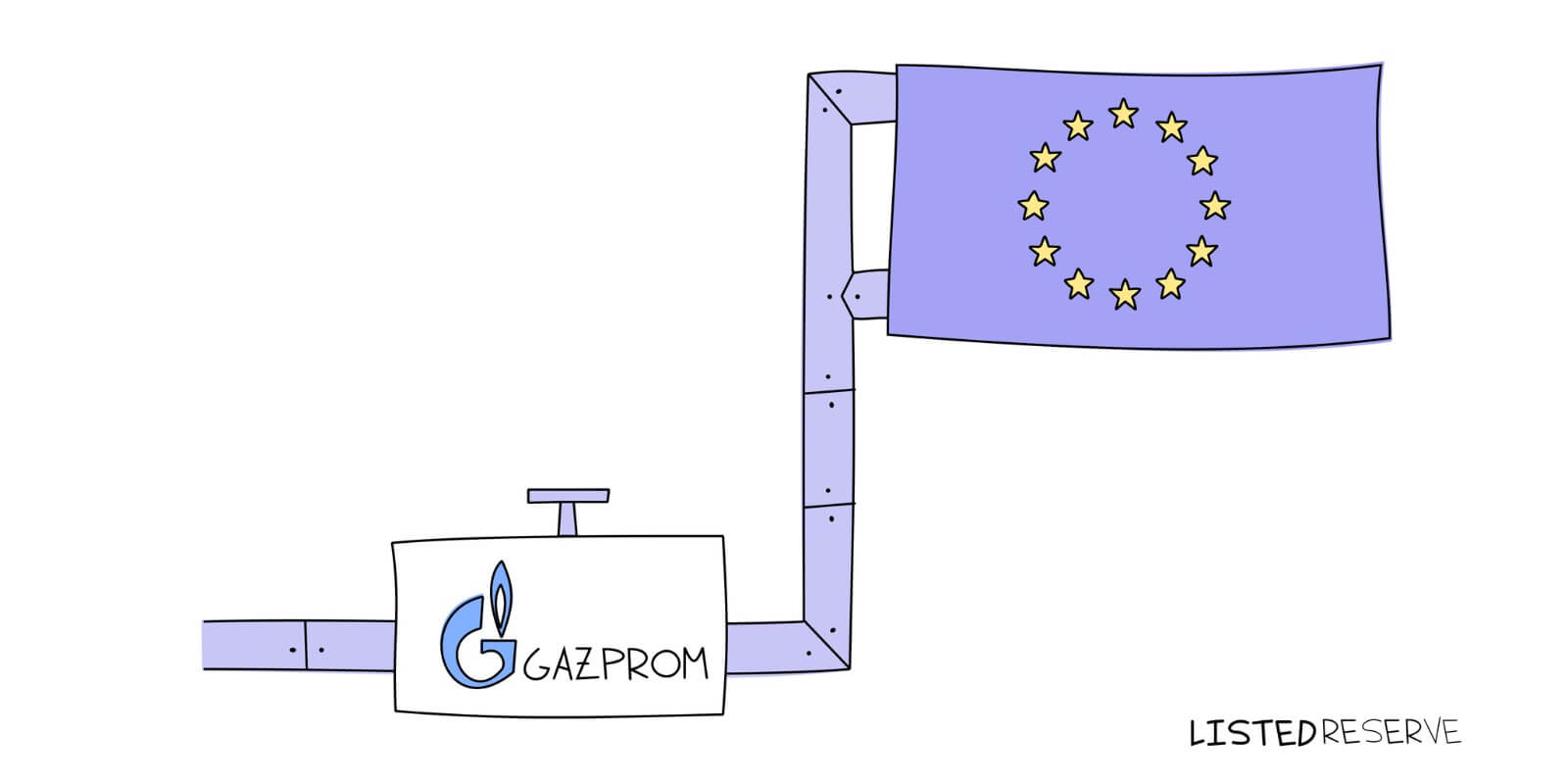 President Vladimir Putin must be terrified of the EU. Prior to his decision to invade the Ukraine, he was assured by Ursula Von Der Leyen that the EU might impose energy sanctions if he did.

It’s another example of Euro-madness and the high handedness that permeates the European Union. They just don’t have a clue. Notwithstanding their very real endeavours and beliefs in greener energy, they have totally sacrificed their own security situation on the altar of Greta Thunberg. They apparently don’t see how ridiculous it is to threaten someone with ‘possible energy sanctions’, for invading a neighbouring country. It’s their best joke yet. Europe has had decades to build out clean power capacity (the French are global experts in nuclear), addressing both environmental and security issues. They could have bankrupted Russia easily, but they didn’t. 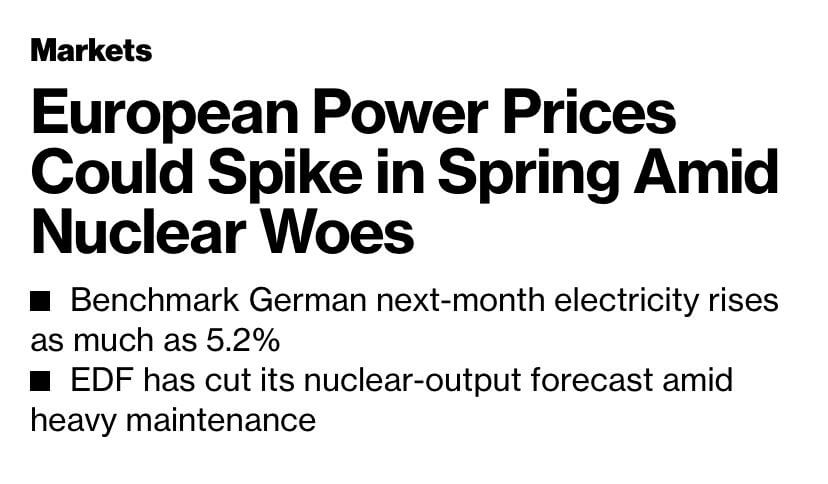 To put the icing on the cake the EU are not able to reach consensus on banning Russia from the SWIFT network, mostly because how will Europe pay for the gas if they do? They will wait for warmer weather first, with a SWIFT ban just after Easter perhaps.

I’ve been saying for years these overpaid bureaucrats are imbeciles. Sometimes it’s funny and sometimes, like now, it’s thoroughly depressing.

Let’s assume for a moment that the truckers in Canada are wrong. Maybe there are other ways to make your point without blocking major cities and borders to the inconvenience of all.

Has Trudeau ever read a single history book? “For your safety” is the standard hiding place for a despot. You may think calling him that is over the top, but it is not. You might also think that such a thing could never happen to you, but it can.

Not just hundreds of Australian donors but their names and addresses too. Of course, the data mysteriously leaked as soon as the Canadian government got their hands on it. The largest Australian donor ($1,500) was then immediately contacted by the ABC for comment, she had this to say:
“I haven’t got much but I wanted to donate as much as I could on principle,”

This goes beyond the death of privacy. You can be harassed for having the wrong belief at the wrong moment in time. These days, there is no personal sovereignty at all.

Could what’s happened in Canada happen where you live? Well frankly, until a few weeks ago you would have said Canada was just about the last place it could happen, but it did.

There is only one truly sovereign asset out there and it is bitcoin. When the Canadian government approached a decentralised bitcoin exchange demanding information on protestors, they replied with the following. 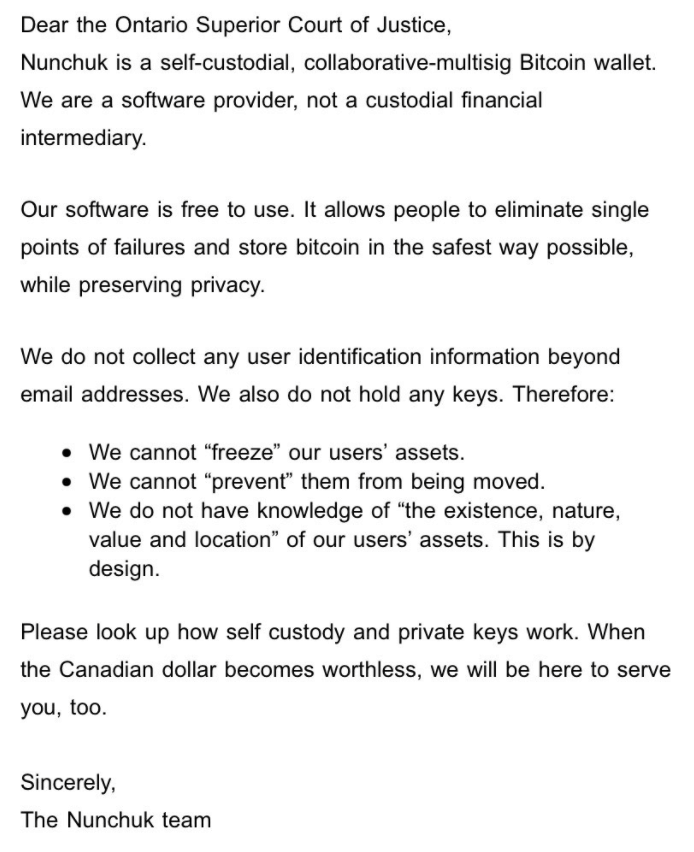 What are the chances asset seizure happens to you? Well, all your cash is currently eroding at a rate of somewhere from 7-15% at present while you are paid less than 1% in interest. Since 1970 the money supply in every Western country has doubled every 6 years. Currently much faster. It is asset seizure.

Your assets exist at the gift of your government and for as long as they are denominated in fiat currency it will always be true.

It won’t happen to you? It already happened. It continues to happen.

Rules for thee but not for me

“If the United States wishes to combat money laundering and preserve the role of the dollar as a reserve currency of the world, we must tackle this issue head on.”

“El Salvador recognizing Bitcoin as official currency opens the door for money laundering cartels and undermines U.S. interests,”
Once upon a time, the US dollar reigned supreme. You never really heard of US Senators legislating to “preserve the role of the dollar as the reserve currency of the world”. The whole point of being the reserve currency is simply that it is accepted without question. There is no need to flex to prove it, even less to legislate. 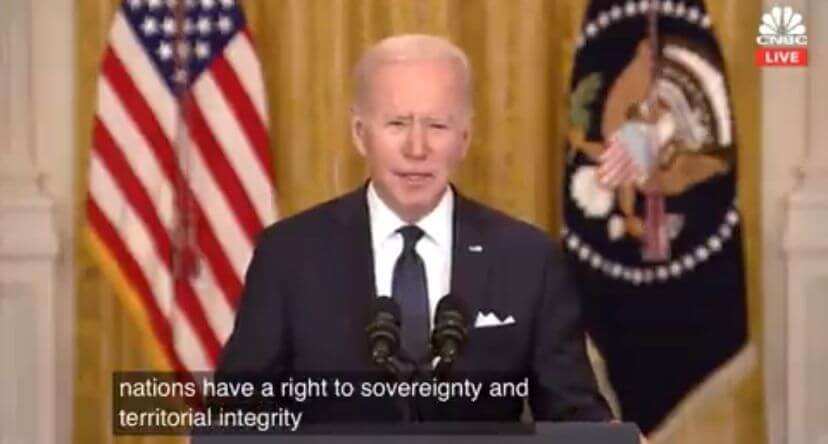 The US is quick to defend the sovereignty of other nations when it suits them, as Biden is doing here with the Ukraine. They have made similar remarks about Taiwan, again, because it suits them.

However, when a sovereign nation does something they don’t like, amnesia sets in. The President of El Salvador was rather more direct. Indeed, he is so aggressive in his stance against America it is surely only a matter of time before he is accused of some heinous crime by the Americans. Let us hope he is as resilient as he is brave. 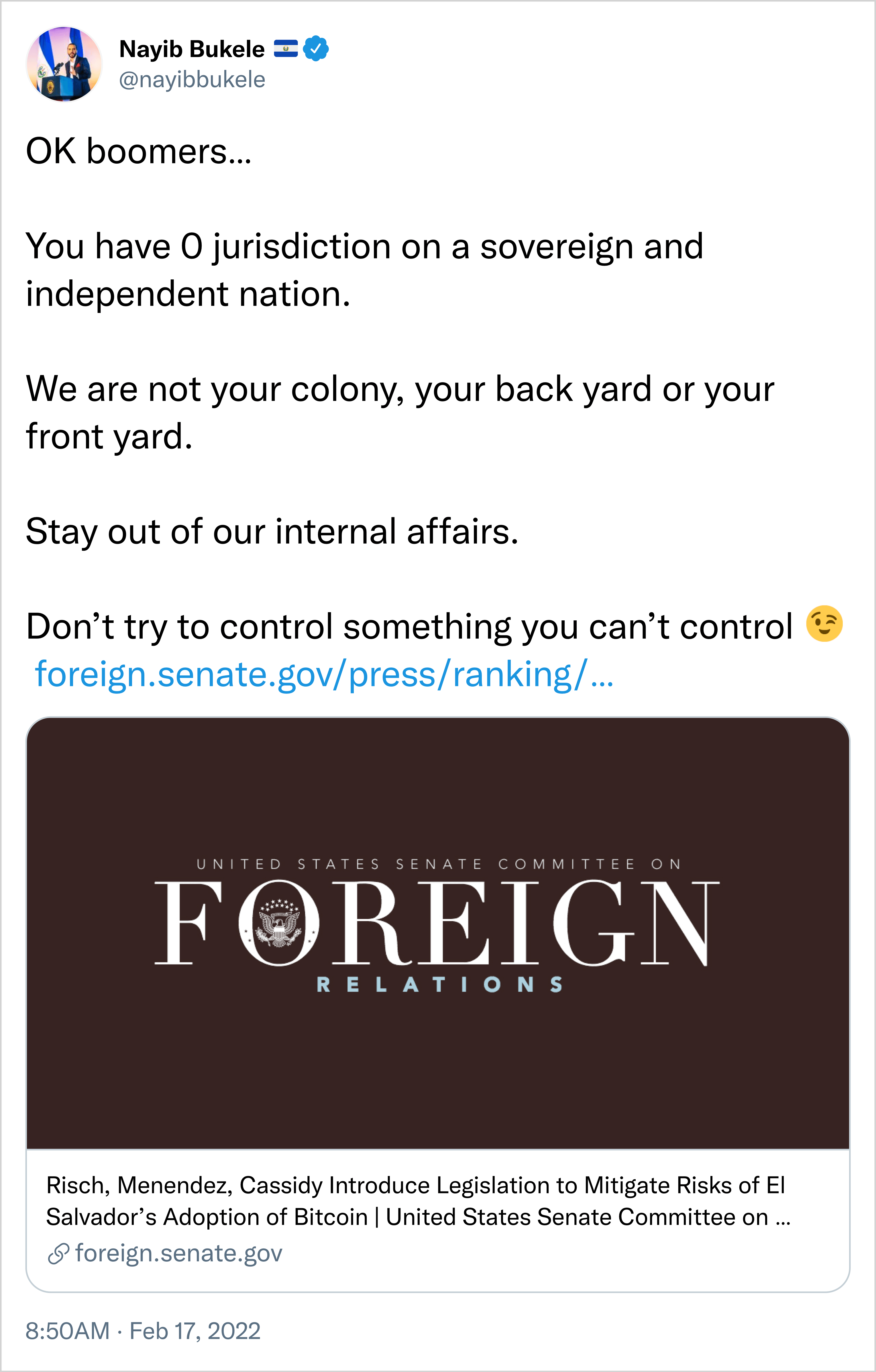 Bitcoin is too volatile 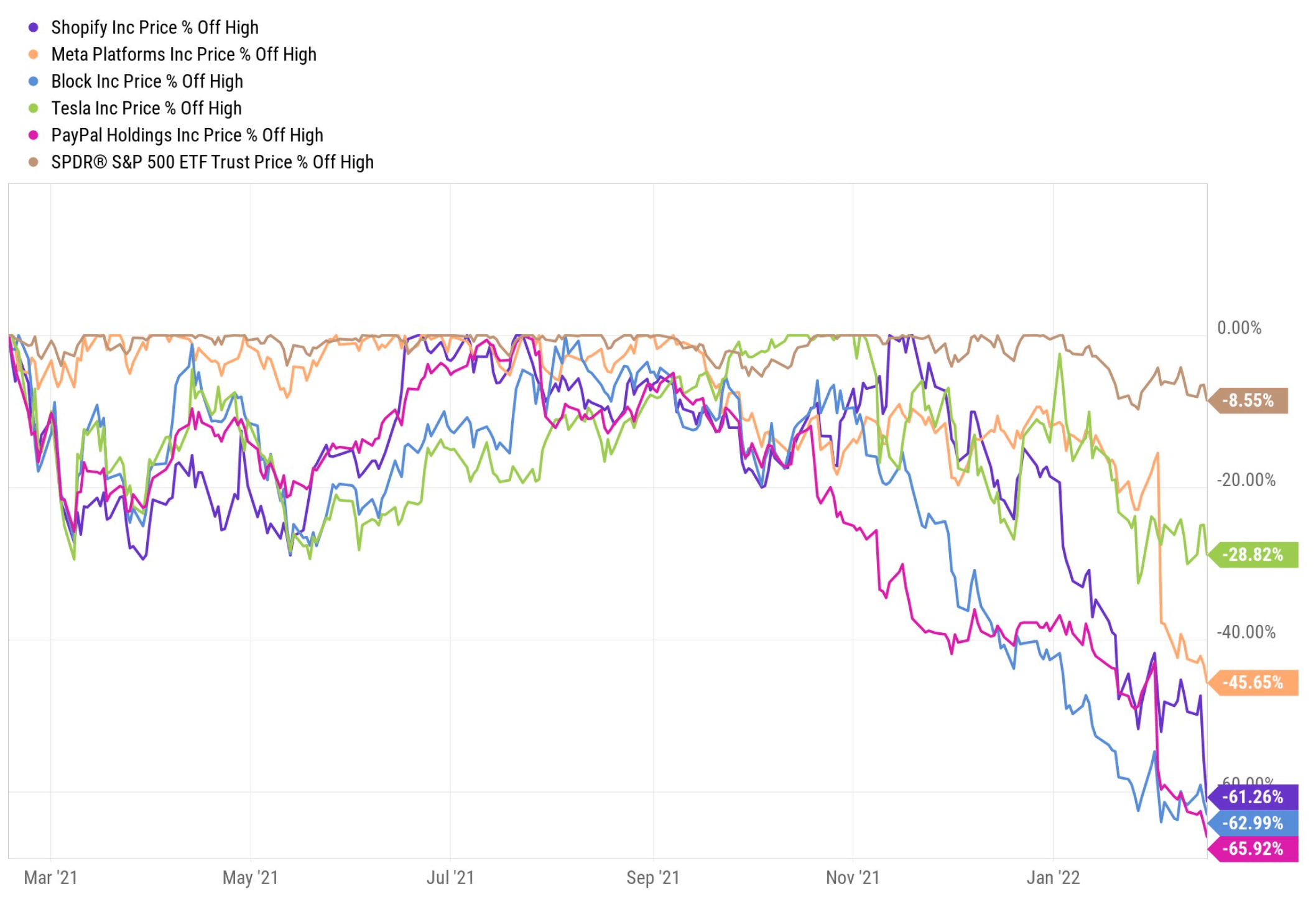 These companies are currently experiencing various issues, but there’s no doubt they’ve been world-beaters. You would be very happy if that had been your portfolio for the last five years, even after the recent drawdown. If you’d put $1,000 in each of them in 2017, you’d have $36,500 today.

Volatility is the price of return.

A tasty bond auction in Europe for you on Tuesday. The French government selling its wares to public. You can lend to them for 3, 6 or 12 months and in return for sharing in their sovereign credit risk you will receive either less, a bit less or a bit less than that in return. In all cases though, less.
“You’re welcome. We’ll see you at our next bond auction.”
The explanation for this is that the bond market is huge and liquid and people are willing to hold them because they can always sell them for cash when they need to. They also consider the credit risk on the sovereign bond less than the credit risk of a commercial bank (which it is). Still, it must be one of the most expensive insurance policies in the world. I really don’t know why most people bother with bonds. They are awful investments and about to get much more awful.